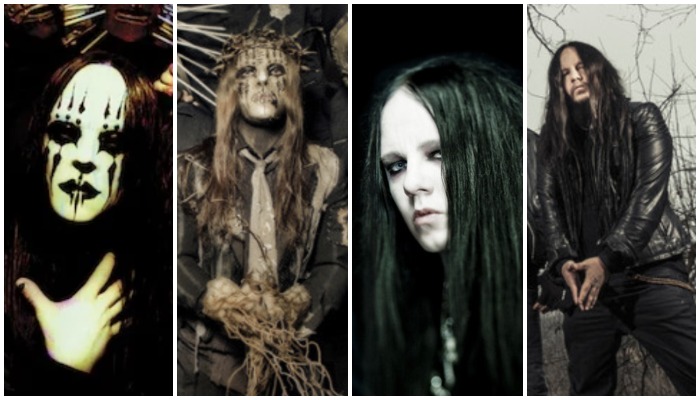 Do you remember the first time you saw Joey Jordison mastering the art of drumming upside down? Of course you do; that moment is seared in our minds. The sheer talent and innovation of the name behind the rise of Slipknot, Murderdolls, Vimic, Scar The Martyr and Sinsaenum can never be underestimated.

This week, we mourn the loss of one of metal’s most legendary drummers and celebrate the life and achievements of a man who was born to bring an edge to the genre that had never been seen before. To pay tribute to the musician, we selected some artists who were fundamentally inspired to take up the mantle of the next generation of metal by witnessing the work of Joey Jordison.

While Trivium were busy cutting their teeth in the metal realm alongside Slipknot, their future drummer Alex Bent was probably intently analyzing and replicating the tricks and techniques of Slipknot’s founding sticksman and Number 1, Jordison. Upon the loss of an instrumental figure in his musical upbringing, Bent took to Facebook to mourn the late drummer’s vital role in his career to date, writing, “I owe so much to Joey Jordison and could never imagine being where I am today without his influence.”

In testament to Jordison’s far-reaching influence, 6-year-old drumming sensation and Slipknot fan Caleb H’s Facebook account expressed his sadness at the loss of his inspiration to get behind a kit. Having first picked up the sticks at the age of 2, Caleb’s post shared Jordison’s recognition and pride in the young drummer’s achievements.

Widows drummer Dizzy Draztik was the initial vocalist for the Rejects, founded alongside Jordison himself as the first incarnation of what would later become Murderdolls. Two decades later, Draztik’s project Widows was brought together with Dolly Doe and cemented by a mutual love and admiration of Jordison’s songwriting and performance. In a Facebook post, Doe detailed that their band simply wouldn’t exist without the influence of the passionate and innovative drummer from Des Moines, Iowa.

Without the crucial steps taken by Slipknot to open the doors for modern metal, it’s doubtful that metalcore bands such as the Devil Wears Prada could even have a stage or crowd to play for. Armed with Jordison’s style of organized chaos, nü-metal icons Slipknot paved the way for artists such as TDWP’s sticksman since 2016, Giuseppe Capolupo, to climb the metal ladder after growing up on a diet of Number 1’s phenomenal influence, as detailed in a personal post.

The Ghost Inside – Andrew Tkaczyk

The Ghost Inside know only too well the effects of tragic events that affect the entire metal world: Their deadly bus crash in 2015 left drummer Andrew Tkaczyk with irreparable, career-changing injuries. Tkaczyk took to Instagram to share a touching drum tribute of Jordison’s famous blast beats on Slipknot’s “Wait And Bleed.” The artist recognized that hearing the drummer’s contributions to the band’s self-titled album at the age of 12 redirected his own interests from playing guitar to sitting behind a kit.

Paying a stunning instrumental tribute to Jordison’s contribution to “Wait And Bleed” by Slipknot, TikTok drummer Tyler Lacca brought back what made Jordison’s talents so irreplaceable to the scene around him. His superhuman pace and charisma onstage played such a crucial role in tracks that raised an entire generation on the heavier side of metal.

For her 1.5 million viewers, watching YouTube drumming maestro Meytal Cohen share her countless Slipknot covers over the years has been a lesson in making the most punishing drum parts look seamless. After recording her take on Jordison’s unmistakeable contributions such as “Eyeless,” Cohen took to Facebook to acknowledge the drummer’s influence on both her and “an entire generation of drummers.”

Royal Blood drummer Ben Thatcher’s tribute to Jordison speaks highly of the Slipknot sticksman’s inimitable effect on younger audiences. That same audience once played the band’s 1999 self-titled venture on a loop and later grew up to idolize his trademark blast beats. Alongside countless others from their generation, Thatcher expressed sadness at the loss of an inspirational musical icon whose work guided the career of many drummers of the past and the beatmakers of the future.

Forging a career as a session drummer since his tenure in the Word Alive, including credits for I See Stars and Sleeping With Sirens, among others, Luke Holland named Jordison as the crucial inspiration behind his decision to take on drumming at the age of 10. Jordison’s authoritative trademark and impenetrable backing for some of metal’s heaviest tracks rubbed off on Holland’s own approach when the occasion calls for the odd legendary blast beat.

This Is Turin frontman Darryl Jones’ touching Facebook tribute to Jordison shows the side of the iconic drummer that some in the metal world may have never seen. Jordison’s dedication to helping artists who caught his eye shone through when This Is Turin once supported Scar The Martyr, asking the band for a CD to take with him. While successful bands rarely take the time to get to know the acts opening their shows, Jordison made a conscious effort to recognize artists starting out in the same position as he was years before.

Nü-metal-meets-alternative-in-a-dark-alley outfit My Ruin were blazing quite a different trail while Slipknot were reveling in global success in the early 2000s. However, that didn’t stop Jordison from personally reaching out to introduce the L.A. group to a wider audience through Slipknot’s Vol. 3: (The Subliminal Verses) U.K. album release party, as vocalist Tairrie B detailed in a Facebook tribute. At a time where his tireless work paid off and surrounded him with hard-earned fame, a drummer of Jordison’s magnitude kept other bands in his circle.

The post 11 artists who are influenced by Joey Jordison’s legendary drumming appeared first on Alternative Press.

Link to the source article – https://www.altpress.com/features/artists-inspired-by-joey-jordison/

Joey Jordison, the founding drummer and co-songwriter of Slipknot, has died at the age of 46. Jordison’s family announced the news in a statement. Jordison…

The masked band mourn the loss of their former drummer. Continue reading… Link to the source article – https://loudwire.com/slipknot-release-statement-on-death-of-joey-jordison-share-tribute-video/

First manning the kit in 1995, Jordison spent 18 years as Slipknot’s percussive anchor before departing from the group in 2013. Continue reading… Link to…