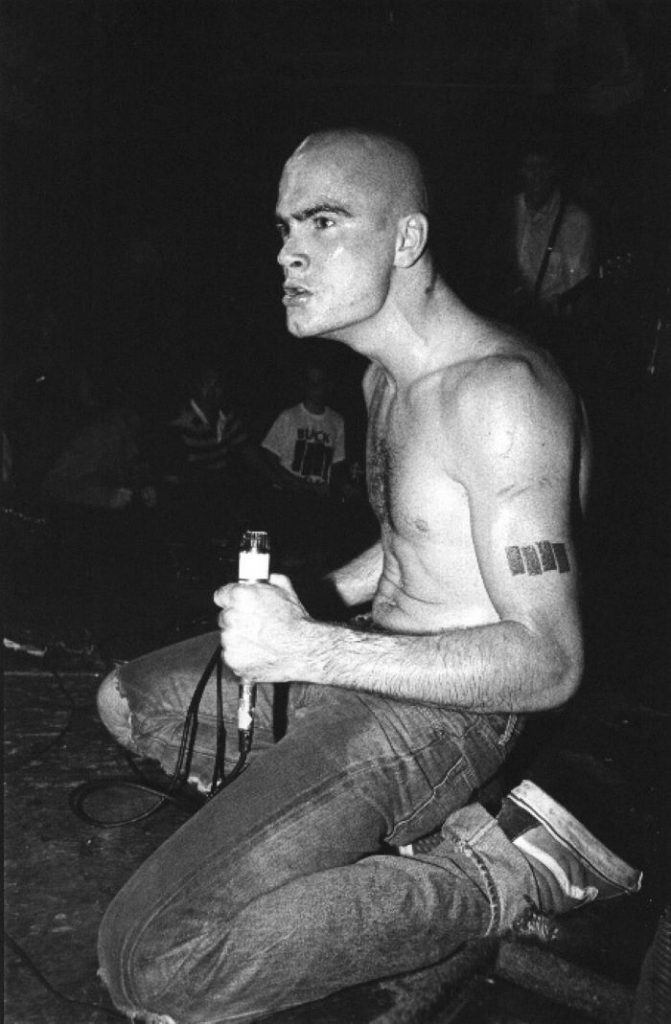 “When Damaged came out, it perfectly represented the depths and darkness of my particular teen angst,” Adam Grossman, guitarist for Angkor Wat, Skrew and Ministry, tells Alternative Press. “It was the soundtrack of my life at that point in time.”

Any musician involved in the most extreme forms of musical expression owes their existence and career to Black Flag. Beginning as a fairly standard-issue late ‘70s punk-rock band, sub-Ramones variety, in Hermosa Beach, California, the band initially called Panic added a blast furnace intensity few other outfits had in those days. It especially made them a standout in the early Hollywood scene, where most of the bands were glam descendants sped up to 185 BPM.

Read more: Check out these rare photos of punk legends, as captured by Jim Saah

As original vocalist Keith Morris left and gave way to a series of leather-lunged howlers — Ron Reyes, Dez Cadena and Henry Rollins, best-known and longest-standing of the four — the band turned up the heat in the furnace. Bassist/conceptual mastermind Chuck Dukowski locked in with drummer Robo to give the grooves all the toughness of steel-reinforced concrete, while guitarist Greg Ginn’s constantly developing songwriting dug deeper and deeper into his ever-darkening layers of angst and neurosis. Meanwhile, waves of atonal blast issued from his clear Plexiglas guitar, seemingly acting as a display case for all the vintage heavy metal and free jazz he consumed.

As Black Flag became one of early hardcore’s definitive, foundational bands — albeit never as speedy as the genre’s dictates proscribed — they committed two ultimate sins: One, they grew their hair. Two, they got slow. And heavy. Second album My War showcased a determinedly uncommercial metal mutation that ultimately proved more influential than their punk or hardcore records. This, despite facing mohawked hordes wanting to kill them every night for “selling out, maaaaan!” Add to this the ongoing battle with the LAPD every time they attempted to play locally, endless van tours earning little money, eating dog food and sleeping on floors. Rollins lived a monastic existence in a shed in Ginn’s parents’ backyard between tours. It wears on the soul.

Read more: These 11 singers steered the course of punk and hardcore in the ’80s

Black Flag truly died for your sins. You should be paying them tithes. Here are 11 bands and genres that owe everything to them. Please enjoy our custom playlist as you read.

The deep, dark secret about Black Flag is that while their influence on hardcore is undisputable, no band sounds like them! Few HC bands copycatted their actual sound or style but adopted their ferocity and tenaciousness. The one exception? Santa Cruz’s BL’AST, who were/are so 1981-82 BF, they might as well have called themselves Rise Above. They formed in 1983, roughly the moment the My War sound gestated. Singer Clifford Dinsmore still hews closely to the shaven-headed howler profile Rollins dropped around then for his brief long-haired, post-Jim Morrison persona. The band’s other constant, guitarist Mike Neider, still plays a Plexiglas Ampeg Dan Armstrong model a la vintage Ginn. They eventually signed to Ginn’s SST Records from 1987-89, and a later lineup featured Dukowski. They still channel Damaged to this day.

True, Sonic Youth evolved out of the no-wave scene that arose on NYC’s Lower East Side in reaction to punk rock in the late ‘70s. But SY leader Thurston Moore has long held that punk and hardcore have both been part of the tapestry woven into their multi-dimensional sound. Certainly Black Flag’s crushing power and dissonance are key factors in the Sonic Youth experience, as well as Ginn and co.’s utter fearlessness in breaking with parameters of style. It’s probably not by accident that SY signed with SST in the mid-’80s, issuing some of their best LPs — EVOL and Sister — with that label.

“I’d think Slayer would definitely be influenced by BF as Jeff Hanneman has been seen in Circle Jerks T-shirts,” Morris muses to AP, who moved onto the latter band following his Black Flag tenure. He has a point: Speed metal famously wed the velocity, noise and fury of hardcore with heavy-metal power and excess. Slayer, the absolute kings of the genre, underlined the lineage with 1996 hardcore covers album, Undisputed Attitude, as well as in Hanneman’s choice of apparel.

It seems odd they covered no Black Flag on the record. You can hear their influence all over the dark lyrical themes, the bone-crushing sound and Tom Araya’s growl, which somehow combines elements of Cadena, Rollins and Ronnie James Dio. Then there was Hanneman and Kerry King’s lead work, which borrowed as much from Ginn’s chaotic guitar logic as from Eddie Van Halen. Yeah, Slayer must have been digging the Flag…

You could hear it on your first spin of Mudhoney’s debut single, “Touch Me I’m Sick.” Think about the sluggish tempos, the grimy lowdown guitars, Mark Arm’s growl ‘n’ howl. Sure, they had to have been endlessly spinning Black Sabbath, the Stooges and the Sonics in their spare time. But the album Mudhoney must have really loved was My War. In fact, you probably couldn’t launch spitwads in any direction in Seattle in those days without hitting a house featuring My War in its record stacks. It’s simply the soundtrack to grunge’s gestation. All of them — Soundgarden, Tad, Nirvana, every last flannel-shirted one of them — dug that album the most.

OK, do you honestly think the fathers of slow-core, sludge metal and possibly even doom metal — Montesano, Washington’s own Melvins — would have existed without the stylistic dents Black Flag clearly pounded into their collective forehead? They began playing hardcore punk, as evidenced by the 2005 anthology Mangled Demos From 1983.  A quick audit of tracks such as “If You Get Bored” or “Forgotten Principles” prove Damaged and Jealous Again were on the turntable a lot. Then My War and Slip It In came out, and Buzz Osborne and crew dug up their old Judas Priest and Sabbath albums and hardly ever played at a tempo beyond creepy-crawl again.

Absolutely, Hole — Courtney Love’s contribution to the alt-rock ‘90s — became synonymous with a certain aggressive pop music with a naked emotional intensity. It permeated the breakthrough album Live Through This, then went glam rock with a shiny, widescreen production on Celebrity Skin. But have you listened to Pretty On The Inside, their debut album, recently? Think about that sludgy, noisy stew, filled with rage bombs like “Teenage Whore” and “Babydoll.” Listen to Love open her throat and just howl. Think Pretty maybe owes a thing or two to My War? Yeah, this writer does, too. But that ain’t a bad thing.

Think not of prime Texas metallicists Pantera’s ‘80s releases on indie Metal Magic Records with vocalist Terry Glaze, which more resembled the poodle-haired Sunset Strip hairspray metal in vogue in those pre-Nevermind days. Fast-forward instead to their Phil Anselmo heyday — Cowboys From Hell, Vulgar Display Of Power, etc. As Morris — who has a great future as a rock critic if neither OFF! nor the Circle Jerks reunion tour work out — puts it, “I think that the vocalist guy in Pantera wouldn’t exist if there wasn’t a Hank Rollins.” True that. But Dimebag Darrell’s heavier-than-heavy riffology and chaotic lead work owe a thing or two to Ginn, as well.

The punkier parts of the industrial scene

Those growly vocals? The 10,000 lb. guitars? The chaotic energy? The dedication to ferocity and that stubborn tenacity in doing doggedly uncommercial music? Would any of that have entered industrial music without Black Flag? Well, pioneers such as Throbbing Gristle already infused the latter qualities in the scene, alongside the ugliness and atonality. But both the Black Flag version of hardcore and the ugly metallicism of the My War days became part and parcel of industrial, even in acts as commercial as Ministry or Nine Inch Nails. Think of Grossman’s comments beginning the story or his fellow Skrew bandmate Danny Lohner’s defection to NIN circa The Downward Spiral tour. Then there’s Austin-based industrial thrash-punks Skatenigs, whose Phil Owen bellows “absolutely!” when asked if Black Flag is an influence. Enough said.

Sure, some of doom metal’s vocalists sound more wistful and melodic than any of Black Flag’s growlers and howlers. But there’s plenty of children of Rollins in the down-tuned rock scene, such as Cathedral’s Lee Dorrian. But the titanic crunch factor in the guitars? That ultra-thick, heavier-than-heavy distortion? Don’t buy that every doom metaller doesn’t own My War and Slip It In? Possibly even Loose Nut and The Process Of Weeding Out? Damn, you’re in denial, aren’t you? Then there’s doom’s even less commercial cousin death metal, who’d never deny BF’s influence, even as they push speed, Ginn’s heaviness and Rollins’ growl to cartoonish extremes.

Yep, this one is definitely a no-brainer. Think of heavier-than-heavy tracks such as Fu Manchu’s “Evil Eye,” with a more Rollins-than-Rollins vocal from Scott Hill. (By the way, did anyone notice Hill also plays a plexiglass Dan Armstrong? Not in the video above, however.) Or Mondo Generator songs such as “So High, So Low.” Sure, the desert which breeds most stoner–rock outfits is so hot that you can’t exactly get up to moshpit tempos — you would perspire to death in 10 seconds! And they all probably own every last Black Sabbath album on scratchy old vinyl. But the long-haired, heavier-than-God era of Black Flag has DNA weaving through every last stoner-rock band’s genetic structure, guaranteed.

Here’s where the effect of Damaged returns to punk in a big way. Angelino power punks the Bronx are so Black Flag, Morris tells AP that “Circle Jerks have had [guitarist] Joby Ford play ‘Nervous Breakdown’ with us.” They were even cast as Black Flag in the 2007 Darby Crash biopic What We Do Is Secret, performing “Police Story.”  True, singer Matt Caughthran more resembles Reyes than the other Black Flag vocalist, and latest LP Bronx VI features tracks such as “White Shadow” and “Superbloom,” which sound more like Guns N’ Roses’ punk-meets-hard-rock approach. Then “Curb Feelers” comes on with a snaky riff more akin to something off Slip It In, and all’s well in the world.

The post 11 bands and genres that prove Black Flag are a continued influence appeared first on Alternative Press.

Link to the source article – https://www.altpress.com/features/bands-influenced-by-black-flag-sonic-youth-slayer/

The idea of compiling a list of the greatest punk singers of the ‘80s might seem a bit odd. After all, this was when hardcore…

1979: As far as the American record business was concerned, punk rock was finished. They’d spent a packet on the Sex Pistols, Ramones and Dead…

IMPALED NAZARENE isn’t a common name in the sphere of mainstream heavy metal music, not by a long shot. But with that said, they’re much…

Welcome to Alternative Press’ 10 best punk vocalists of the ‘10s. As we noted when counting down punk’s greatest guitarists of this period, the genre…