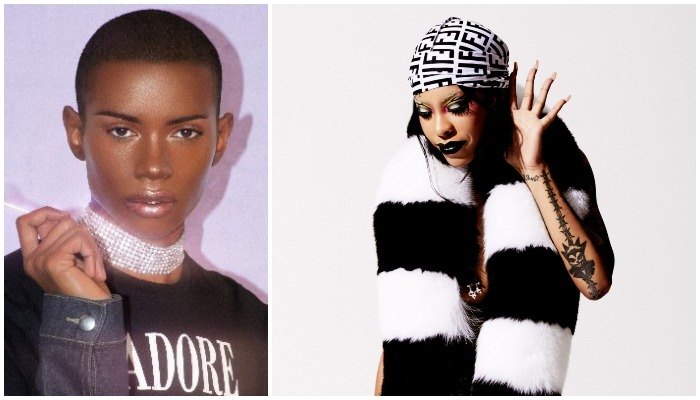 Although it has the word in its name, hyperpop is a far cry from the pop music you hear when you turn the radio on. A relatively new concept, hyperpop is the product of forward-thinking 2010s pop music combined with SoundCloud’s nightcore scene.

PC Music owner A.G. Cook, as well as SOPHIE and others associated with the record label, are widely credited as the names that gave hyperpop its start in the mid-2010s, later materializing it into a microgenre.

Read more: 9 artists that Alternative Press editors and writers are listening to

In 2019, Spotify launched a hyperpop playlist, featuring a wide scope of artists as well as guest curations from 100 gecs, Cook and more. This collection further proved that the undefinable sound of hyperpop was deserving of its own signifier.

While what exactly hyperpop sounds like can’t be pinned down, its community does have one thing in common: a desire to be heard and be creative outside the limits of the mainstream.

Here are 15 artists making hyperpop music and taking over the alternative scene.

The success of 100 gecs‘ 2019 album, 1000 gecs, was the main motivator in Spotify’s creation of its hyperpop playlist. The album helped solidify hyperpop’s place in modern music and inspired many others to venture into a similar sonic range. In 2020, the duo shared a remix album of 1000 gecs. 1000 gecs And The Tree Of Clues featured names such as Cook, Fall Out Boy, Charli XCX and more.

Standout alt artist Rico Nasty is a musical powerhouse, a one-of-a-kind artist who combines hyperpop, trap metal, nü metal, scream rap and more. Her captivating song “IPHONE” was produced by one-half of 100 gecs (Dylan Brady) and has allowed her to explore a new side of her sound.

If there was a figurehead of hyperpop, it would be Charli XCX. Her 2017 mixtape, Pop 2, was the product of collaborations with like-minded artists—Cook, SOPHIE and other then-underground names such as Dorian Electra and Caroline Polachek. While she has shown hesitation to be boxed into any one genre, hyperpop included, there’s no question that she’s a leader in creating genreless music.

You wouldn’t guess it, but hyperpop star Gupi is the son of pro skateboarder Tony Hawk. However, he has made a name for himself in the music scene without his father’s help. Simple lyrics, maximalist instrumentals and dubstep-influenced sounds only further prove that Gupi deserves a place in the hyperpop scene.

21-year-old Fraxiom grew up on the bubblegum-pop stylings of Katy Perry and Black Eyed Peas before seeing 100 gecs open for BROCKHAMPTON on tour in 2019. This experience gave them the motivation to make their own music. So they quit their job and started learning how to create music from their bedroom. They also joined forces with Gupi to create the musical duo food house and have released similar music together.

The latest hyperpop artist to take over TikTok is ElyOtto. Not only did the smash hit “SugarCrash!” amass over 150 million streams on Spotify, but over 8 million videos on TikTok used the sound. This popularity also led to Kim Petras and Curtis Waters hopping on a remix of the track with ElyOtto.

Rising hyperpop star Namasenda is one of PC Music’s newest artists. Utilizing Auto-Tune—like many hyperpop artists—and distorted beats, she’s quickly making a name for herself in the scene. Even joking that Nicki Minaj invented hyperpop, Namasenda takes inspiration from artists such as Cook, Danny L Harle and more.

With pumping beats, catchy verses and an overall carefree “bad bitch” attitude, Quay Dash excels just by being herself. Influenced by rappers such as Lil’ Kim, Quay Dash found a home with the LGBTQIA+ community in the Bronx. With quick-fire lines that trash-talk any transphobic bigot who dares speak up, she’s yet another SOPHIE-approved artist to add to your playlists.

Approved by SOPHIE, khalif (formerly known as Le1f) is known for creating dramatically dark hyperpop rap songs. Listen to one of the artist’s songs and you come face to face with an entire emotional experience. khalif definitely deserves to be on your radar, and this unique sound will get you hooked.

If you watch a lot of Netflix rom-com TV shows, you may have already heard one of CHAV’s songs before. “Kickin’ On The Floor (QUEEN)” can be heard during a party scene in Ginny & Georgia. CHAV is a breakout pop-rapper who co-founded the queer and progressive pop label Flat Pop Records. In fact, many of their songs focus on the queer experience and what it means to be a queer person of color in the modern world.

If you opened TikTok just once during the summer of 2020, there’s no doubt that CMTEN’s viral hyperpop track featuring Glitch Gum made its way onto your page. “NEVER MET!” is glitchcore at its finest, with dozens of layers and stylized vocal effects. With almost 50 million streams on just that song alone, the song’s catapult to internet fame also led to a 100 gecs remix.

Directly influenced by the club-pop stylings of Cook’s mid-2010s work, Petal Supply makes colorful and energetic songs. While other artists struggled through the COVID-19 pandemic, Petal Supply harnessed the sudden turn to virtual communication and increased social media use. It also inspired her to work on new music centered around the idea of “e-dating,” which is what her 2020 album, Hey, is all about.

Hyperpop is known for its queer themes, as a large percentage of both fans and artists are a part of the LGBTQIA+ community. That Kid embodies these themes and takes them to a new level. With sexual lyrics, vibrant instrumentals and overall good energy, That Kid is as unapologetically glamorous as the entirety of the hyperpop genre is.

16-year-old glaive hit almost 800,000 monthly listeners on Spotify only one year after teaching himself how to make music during quarantine. Trap-based production fused with EDM and pop influences create glaive’s unique sound. While he still attends school, and occasionally has to stop taking a test to answer a call from his manager, glaive is definitely one to keep your eye on.

The post 15 artists changing the landscape of alternative music with hyperpop appeared first on Alternative Press.

Link to the source article – https://www.altpress.com/list/hyperpop-artists-to-know/

100 gecs have announced a North American tour, kicking off later this year. Dubbed the 10,000 gecs Tour, the duo’s 34-stop circuit includes shows in…

100 gecs have teased new music is on the way, with the experimental duo taking to social media to announce a new album, ‘10000 gecs’.…

Last spring, Elliott Platt was cleaning fish tanks at his local pet store when he received the luckiest news of his young life. He’d been…

Glaive and Ericdoa have released a new song called ‘fuck this town’ ahead of a joint EP arriving this September. READ MORE: Glaive – teen hyperpop…