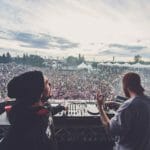 Coming off of their most recent release, “Drive” alongside Tilian and BEAUZ, Adventure Club have returned for their final pre-album single, “Never Surrender” with Codeko and Sarah De Warren. The duo’s sophomore album, Love // Chaos, is slated to hit streaming platforms near the end of the year.

Hinging on the trials and tribulations that go hand-in-hand with post-relationship heartbreak, “Never Surrender” fuses Adventure Club and Codeko’s pristine production capabilities with Sarah De Warren’s grounded lyricism and vocals. Melancholy meets melodic on a nostalgic entity laced electric guitar and crisp snares. Fall into the evocative soundscape that is “Never Surrender” below.

Link to the source article – https://dancingastronaut.com/2021/11/adventure-club-emits-final-pre-album-single-never-surrender/

Working their way through 2021 with one fiery pre-album release after the next, Adventure Club slides one more in as we bridge the gap between…

Six years after the release of their debut album, Red // Blue, Adventure Club have divulged their sophomore album, Love // Chaos, via Ultra Records.…

Considered to be one of the forefathers of melodic dubstep, Adventure Club, has released a new single that will give fans a taste of what’s…

Adventure Club‘s Love // Chaos is on the horizon, and the duo have presented fans a flux of singles emblematic of what’s to arrive. The…