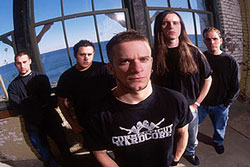 Band Photo: All That Remains (?)

All That Remains has announced that drummer Jason Costa has decided to sit out the remainder of the US tour dates. Taking his place will be Anthony Barone of Beneath The Massacre and Shadow Of Intent. A message from the group reads as follows:

“All That Remains unfortunately has to announce that our drummer Jason Costa has to head home to deal with some personal matters.

“We love him and respect his decisions, we look forward to having him back when he is ready.

“We would like to thank Anthony Barone for jumping in at the last minute. Make some extra noise for him when you come to a show.”

Link to the source article – http://www.metalunderground.com/news/details.cfm?newsid=152977

Tallah Premiere New Single & Music Video “The Impressionist” Band Photo: All That Remains (?) Tallah premiere another single and accompanying music video from their…

ALL THAT REMAINS is celebrating the 15th anniversary of their breakthrough album, “The Fall Of Ideals”, with a tour and a vinyl reissue. The trek…

March 30, 2022 ALL THAT REMAINS drummer Jason Costa has left the band’s current U.S. tour in order to “deal with some personal matters.” He…