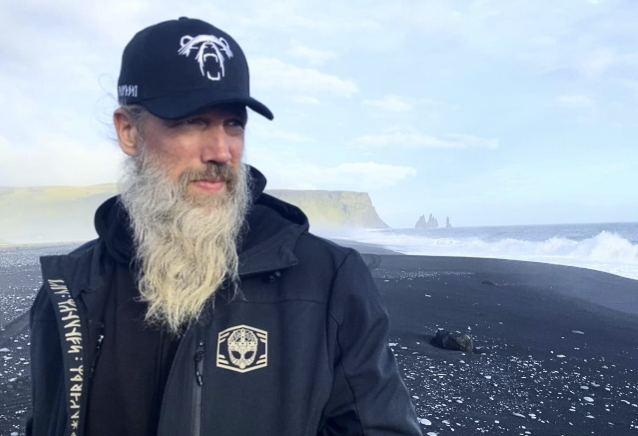 During an appearance on MACHINE HEAD frontman Robb Flynn‘s “No Fuckin’ Regrets With Robb Flynn” podcast, Johan Hegg of Swedish death metallers AMON AMARTH revealed that he and his wife Maria recently took in a refugee family from Ukraine.

“Obviously what’s happening in Ukraine is horrible,” he said (as transcribed by BLABBERMOUTH.NET). “We have two Ukrainian women and their children living with us. A lot of people in Sweden are doing that. It needs to be done. Over 10 million people in Ukraine are refugees, and almost four million of them are refugees in Europe now. So, obviously, they need somewhere to stay.”

When asked by Flynn if the Ukrainian family that is staying with Hegg has relayed any horror stories from their journey escaping their war-torn country, the singer said: “Fortunately for us, and for them — mostly for them, but also for us — because there are stories where people are very traumatized who come to live with people, and it is difficult. But fortunately for the people living here, they didn’t experience too much on that; apparently, they got out in time. They’re from Kyiv. But they have both a place outside Kyiv, in the countryside, and an apartment in Kyiv. So, at the moment, it’s the mother and grandmother of two children that are here, but the husband of the mother of the children is still in Ukraine, which, obviously, is difficult for them. I think he’s a farmer, so I think actually he’s trying to farm the land so that they can produce food, which is also important, obviously. But every once in a while, you can tell that the mood is going down and they’re affected by it. But they’re doing a good job of trying to keep a positive attitude, which I’m really impressed about.”

Hegg went on to say that he and his wife are simply trying to help in any way that they can. “We just imagine what it would be like to have to leave everything behind yourself — live from a suitcase, basically, and depend on other people to help you. It must be horrible,” he said.

In addition to the fact that he and his wife are hosting a Ukrainian family, Hegg and his AMON AMARTH bandmates have launched an auction of rare collectible items from the vault to provide humanitarian aid to refugees of the war in Ukraine.

“Obviously, it’s terrible,” Johan said. “It’s the biggest refugee crisis since World War II. But we also feel that it’s important not to forget that there are other warzones in the world with loads of refugees. So we decided that we would donate the proceeds [from the auction] to the UNHCR [United Nations High Commissioner for Refugees], which is the UN refugee program, and then Doctors Without Borders [which brings desperately needed medical care to crises around the globe and pioneers modern-day humanitarian aid]. But also since my wife especially, but also me, we’re big animal lovers, we decided to donate to the international fund for animal welfare. Especially for the situation in Ukraine, where a lot of pets and farm animals are suffering right now and they also need our help. Because have pets, and they’re family members to us. It must be devastating to have to leave your pets behind. So hopefully that money can help someone be reunited with a dog or a cat. It’s just stuff lying, collecting dust right here. So if we can make someone happy and we can collect some money to give away to charity, that’s awesome.”

In early March, Hegg publicly denounced Russia’s invasion of Ukraine and called for peace to be restored in Europe. The 48-year-old musician took to his Twitter to write: “My lyrics are often about glorious battles & brave warriors, but they’re just stories, sometimes based on history. That doesn’t mean I condone war as a matter of solving conflicts. War is never a solution to any dispute. It can only generate more animosity & hate between people.

“Right now Putin has invaded the Ukraine, a democratic, sovereign state, and though this is far from the only weaponised conflict in the world, it has affected me deeply. I thought we as Europeans were passed this, especially considering our troubled past.

“My hope is that Putin will end this attack on Ukraine, & that peace will be restored in Europe. My fear is that even if this happens, it will take a very long time for trust to return between Russia & the rest of the world. I stand with Ukraine & all Russians who oppose this war.”

More than five million people have reportedly fled Ukraine since the start of the Russian invasion. UNHCR said 4,796,245 million Ukrainians had left the country since February 24.

Vikings, due to the situation in Ukraine we have decided to auction off some rare collectible items from the vault to help refugees and victims. For complete details and listings please visit:https://t.co/KGvTu2qKb4

Link to the source article – https://www.blabbermouth.net/news/amon-amarths-johan-hegg-and-his-wife-take-in-ukrainian-refugee-family/

‘While children die in Ukraine, UFC will not get my money,’ says the singer. Continue reading… Link to the source article – https://loudwire.com/amon-amarth-johan-hegg-boycotts-ufc-allowing-russian-fighters-compete/

AMON AMARTH frontman Johan Hegg has denounced Russia’s invasion of Ukraine and has called for peace to be restored in Europe. The 48-year-old Swedish death…