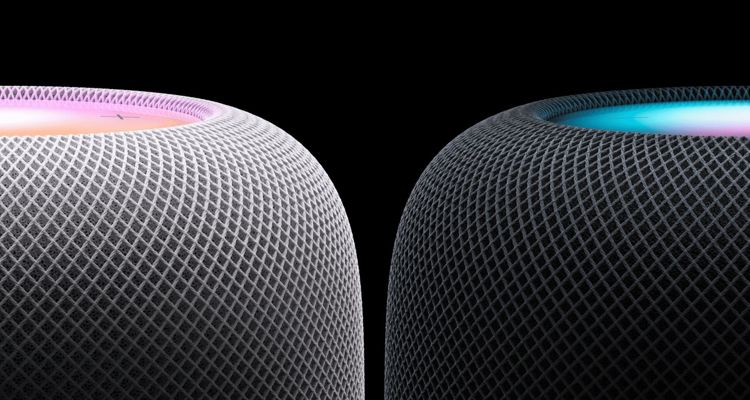 Apple has announced the second-generation HomePod, “a powerful smart speaker,” delivering “next-level acoustics” with a sleek new design. The latest HomePod is available to order online and in the Apple Store app beginning today, with availability starting Friday, February 3.

“Leveraging our audio expertise and innovations, the new HomePod delivers rich, deep bass, natural mid-range, and clear, detailed highs,” says Greg Joswiak, Senior Vice President of Worldwide Marketing at Apple. “With the popularity of the HomePod mini, we’ve seen growing interest in even more powerful acoustics achievable in a larger HomePod. We’re thrilled to bring the next generation of HomePod to customers around the world.”

The new HomePod features a “custom-engineered high-excursion woofer, powerful motor that drives the diaphragm a remarkable 20mm, built-in bass-EQ mic, and beamforming array of five tweeters around the base,” all working together to achieve a powerful acoustic experience. It combines an S7 chip with software and system-sensing technology that offers even more advanced computational audio, maximizing the full potential of its auditory system to create a “groundbreaking listening experience.”

With all the robust new hardware in the latest generation HomePod, owners of the original HomePod may wonder if it’s possible to pair the new HomePod with its first-generation and mini counterparts. Notably, creating a stereo pair in the same room with the new HomePod requires another second-generation HomePod — although you can use the two models to play your music or use features such as Intercom in different rooms.

Additionally, a software update is on the way for the HomePod mini that grants it two features currently available only to the new generation: indoor temperature and humidity-sensing controls.

The latest HomePod costs $299 and comes in white and midnight colors. In-store availability and deliveries begin Friday, February 3, in the US, UK, Canada, Australia, China, France, Germany, Italy, Japan, Spain, and 11 other countries.

Apple has announced that it will be discontinuing the iPod. The last remaining model, the iPod Touch, will be available while supplies last. Apple released…

You likely already sing along to many of your favorite songs, but wouldn’t it be much easier if you didn’t have that pesky lead singer…