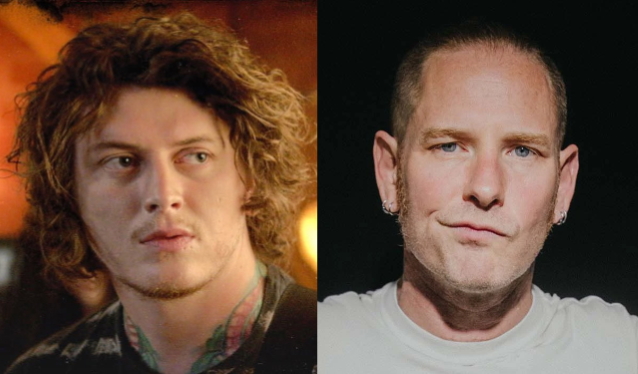 ASKING ALEXANDRIA guitarist and co-founder Ben Bruce was the featured guest on BBC‘s “The Rock Show With Johnnie Walker” during the “Rock God” segment. Ben picked SLIPKNOT and STONE SOUR frontman Corey Taylor and stated about his choice (as transcribed by BLABBERMOUTH.NET): “Corey has been someone that’s inspired and influenced me since I was — I don’t know — probably 10 [or] 11 years old. I was listening to a lot of blues music and other rock and metal music that’s passionate too, but there was just something about SLIPKNOT where I was just mindblown. I’d never heard anything like it. And then from there I discovered STONE SOUR, obviously, and I think the first song I heard by them was actually ‘Bother’, and I just remember thinking, ‘There’s no way this is the same guy.’ It really, for me, was those softer, almost rockier ballads in STONE SOUR that really made think, ‘Okay, this guy is the real deal.’ From there, actually, me and Corey have ended up becoming really quite good friends over the years, which is incredible to think about considering what an inspiration he was to me growing up, and still is to this day.”

Two years ago, Bruce told NME that he sent a copy of ASKING ALEXANDRIA‘s 2020 album “Like A House On Fire” to Taylor for his opinion. “I sent it [to him] as soon as we finished recording and was, like, ‘Dude, what do you think?’,” Ben recalled. “He said, ‘I think it’s going to piss people off and I think it’s the best thing you’ve ever fucking written. Whether people realize it or not on a first listen, I promise you they will. Every band who’s been around for years has been through this and it’s your time.'”

This past January, ASKING ALEXANDRIA released a new EP titled “Never Gonna Learn” via Better Noise Music. In addition to the title track, the project included a new collaboration with Maria Brink from IN THIS MOMENT.

ASKING ALEXANDRIA closed out 2021 by celebrating its first-ever No. 1 at U.S. active rock radio with hit single “Alone Again”, taken from the band’s seventh full-length studio album “See What’s On The Inside”. The song had the biggest first streaming day and week in the group’s history and was a fitting first offering from its latest album. “See What’s On The Inside” made a top 10 Spotify debut in both the U.S. and the U.K. upon release.

Link to the source article – https://www.blabbermouth.net/news/asking-alexandrias-ben-bruce-picks-corey-taylor-as-his-rock-god/

March 31, 2022 ASKING ALEXANDRIA guitarist and co-founder Ben Bruce recently appeared on “Side Jams With Bryan Reesman” to discuss his newfound love for cooking…

Continuing the musical journey introduced on their fall 2021 album “See What’s On The Inside”, acclaimed British rockers ASKING ALEXANDRIA have released a new EP…

April 15, 2022 Houston-bred rock/hip-hop fusion artist Hyro The Hero has released a new version of the title track off his “Kids Against The Monsters”…

April 4, 2022 Kentucky rockers BLACK STONE CHERRY have released the official music video for the song “Ringin’ In My Head”. The track is taken…