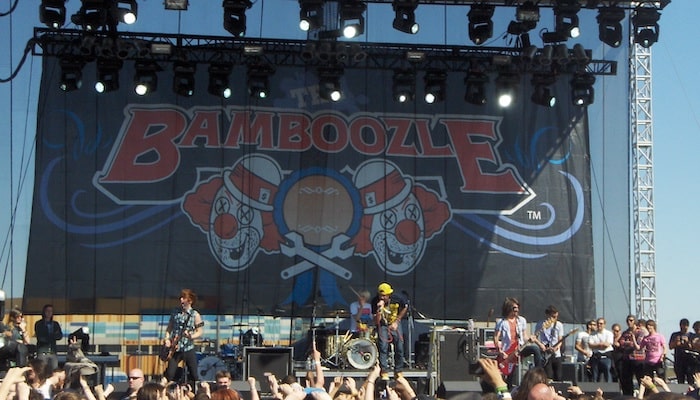 Legendary music festival Bamboozle has officially announced its return. The event will come back to Asbury Park, New Jersey in 2023, just in time to celebrate the 20th anniversary of its debut.

The reveal was accompanied by a video, posted to the official Bamboozle website and social media. While the festival has yet to announce a line-up or venue, the event dates have been confirmed for May 5-7, 2023.

In characteristic fashion, the reveal was accompanied by a cryptic statement from Bamboozle founder John D’Esposito about the upcoming event.

“We’re back,” John D’Esposito says. “The clowns are safe and home where they belong. 2023 can’t come soon enough. Let’s get it.”

While concrete details of the event remain forthcoming, fans have been receiving hints about the event since early this year.

In February, Bamboozle’s official Twitter account posted a simple visual, along with the vague message “the calm before the storm. #bamboozlefestival.”

The hints continued trickling in over the last few months. A March 9 post on Facebook introduced what we now know to be the event’s official tagline, “Emo’s not dead.”

Also in March, the festival launched a Myspace-inspired website, further suggesting the event would return in 2023. On March 17, D’Esposito additionally posted one of the most definitive comments regarding the event to date on his personal Facebook page.

Read more: 10 artists who bring together elements of alternative and hip-hop

“As promised, today a festival website was launched,” D’Esposito wrote. “Was it your space – or myspace? Either way, let the games begin. 18 years ago, we created an event on Myspace – for its 20th anniversary we are inviting back some old friends, introducing everyone to new friends and will no doubt, redefine a scene  and once again rise to the top of the festival world. Welcome Home BAMBOOZLE FESTIVAL. 10 Years Will Be Long Enough.”

While the website content has since been replaced by an official teaser, the new announcement brings little by way of definitive information about the upcoming festival. However, D’Esposito did provide additional information to the Asbury Park Press.

“It’s good to be back,” D’Esposito told Asbury Park Press. “When Bamboozle comes back it’s not going to look the same because the scenes change and evolve but we’re definitely going to celebrate our roots because we wouldn’t be here 20 years later if the festival wasn’t special to a lot of people. We not only want to re-create that memory but we want to evolve into a new trend setter.”

Bamboozle festival has a long and storied path leading from its earliest years to our present musical moment. The festival actually grew from the roots of Skate And Surf, which D’Esposito launched in 2001. Though the event initially lasted for only two years, the festival presented iconic sets from artists including My Chemical Romance, Thrice and Paramore among many others. The festival was also reprised in 2013 and saw its final run in 2015.

In 2003, Bamboozle took the place of Skate And Surf, and was held in Asbury Park from 2003 to 2005. While the festival made its way back to the city in 2012, the in-between years saw it move to the Meadowlands Sports Complex in East Rutherford, New Jersey.

The model of Bamboozle has continued to evolve and inspire offshoots over the years. From 2006 to 2009, Bamboozle Left brought the event to California, along with artists including Dashboard Confessional, the All-American Rejects and Fall Out Boy.

From 2008 to 2010, the Hoodwink Festival was hosted in both New Jersey and California. For those events, bands including the Summer Set, Say Anything and Saves The Day played cover sets featuring music by other notable artists.

While Bamboozle helped hundreds of thousands of fans connect with artists over the years, the festival began to run into trouble in the lead-up to its final year. Faced with financial losses in 2012, controlling partner Live Nation ultimately chose to put a hold on the event.

At the time, D’Esposito made it clear he was committed to growing in spite of the decision. The festival director told NJ that he was interested in expanding his approach to event design and promotion, taking advantage of technology, social media and other modern tools.

Even so, he insisted on staying true to his roots. “It’s time to regroup,” D’Esposito told NJ, “and go back to the core.”

Now, we will have a chance to see how the festival has evolved as D’Esposito gears up for a 2023 return. It will be interesting to see how the passage of time impacts the event, given that nearly a decade has passed since Bamboozle’s stages last played host to musical artists.

D’Esposito himself has changed over the years, noting that even his children have never had the chance to see their father’s work firsthand.

“They didn’t get to see Bamboozle,” D’Esposito told the Asbury Park Press. “I’m coming back to show my kids how good their dad was.”

What is your reaction to the return of Bamboozle? Let us know in the comments below.

The post Bamboozle sets the stage for the legendary festival to return in 2023 appeared first on Alternative Press.

Link to the source article – https://www.altpress.com/news/bamboozle-festival-2023-dates-announcement/

Firefly Music Festival has announced its 2021 lineup. The iconic music festival will return this year for four days, taking place Sept. 23-26. The event…

Bigfoot Festival have announced the full line-up for their 2021 festival next month. The Ragley Hall, Warwickshire-based event, which is being billed as the UK’s…

The line-up for End of the Road 2021 has been announced after the Wiltshire festival announced plans to go ahead this year. Set to take…

Roskilde Festival has been cancelled for the second year running due to ongoing coronavirus-enforced restrictions. READ MORE: European festivals on returning in 2021: “We are…