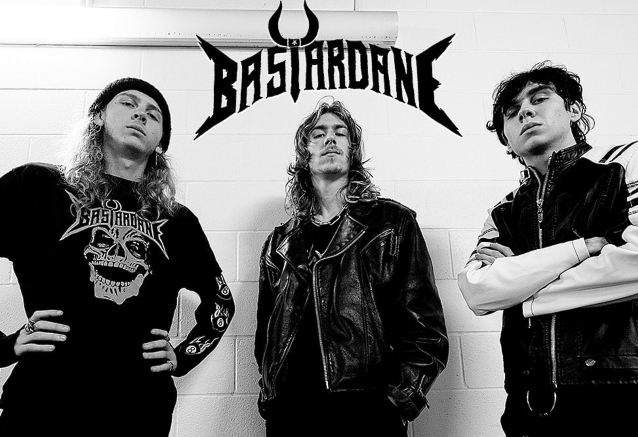 BASTARDANE, the new band featuring drummer Castor Hetfield, the son of METALLICA frontman James Hetfield, will kick off its 2022 tour in May. So far the following shows have been announced:

BASTARDANE will also appear at this year’s METALLICA co-headlined edition of the BottleRock Napa Valley music festival, which is scheduled for May 27-29 at the Napa Valley Expo in Northern California.

BASTARDANE recently released its debut album, “Is This Rage?”

In addition to the 21-year-old Castor, the Savannah, Georgia-based hard rock trio includes Jake Dallas on vocals/bass and Ethan Sirotzki on guitar. The group formed in 2019 from a collection of college students who met through jamming in basements, backyards, and anywhere that was available. Their brand of entertainment fuses fast high-gain riffs and power chord grooves with heavy feedback and clean, dissonant chord progressions.

In a 2021 interview with The Hum, the trio said: “We are BASTARDANE and we are not some average chump white male band looking to get laid. There is a time in every generation when music is the guiding light out of hard times. We just want to make emotionally empowering music that isn’t trying to cater to a certain audience. Our career is about making people happy and fulfilling the emotional needs of those who can’t tolerate words alone.”

“Is This Rage?” track listing:

James Hetfield isn’t the only member of METALLICA whose offspring has followed in his footsteps. Two of drummer Lars Ulrich‘s sons play together in TAIPEI HOUSTON, while bassist Robert Trujillo‘s son Tye plays bass for OTTTO.

Castor‘s mother is James‘s wife Francesca, whom he married in 1997. She is from Argentina and used to do wardrobe for METALLICA.

Link to the source article – https://www.blabbermouth.net/news/bastardane-feat-james-hetfields-son-castor-may-2022-tour-dates-announced/

BASTARDANE, the new band featuring drummer Castor Hetfield, the son of METALLICA frontman James Hetfield, has just released its debut album, “Is This Rage?” In…

April 15, 2022 BASTARDANE, the new band featuring drummer Castor Hetfield, the son of METALLICA frontman James Hetfield, will team up with OTTTO, the three-piece…

Castor Hetfield is the drummer for the hard rock trio. Continue reading… Link to the source article – https://ultimateclassicrock.com/james-hetfield-son-castor-bastardane-album/