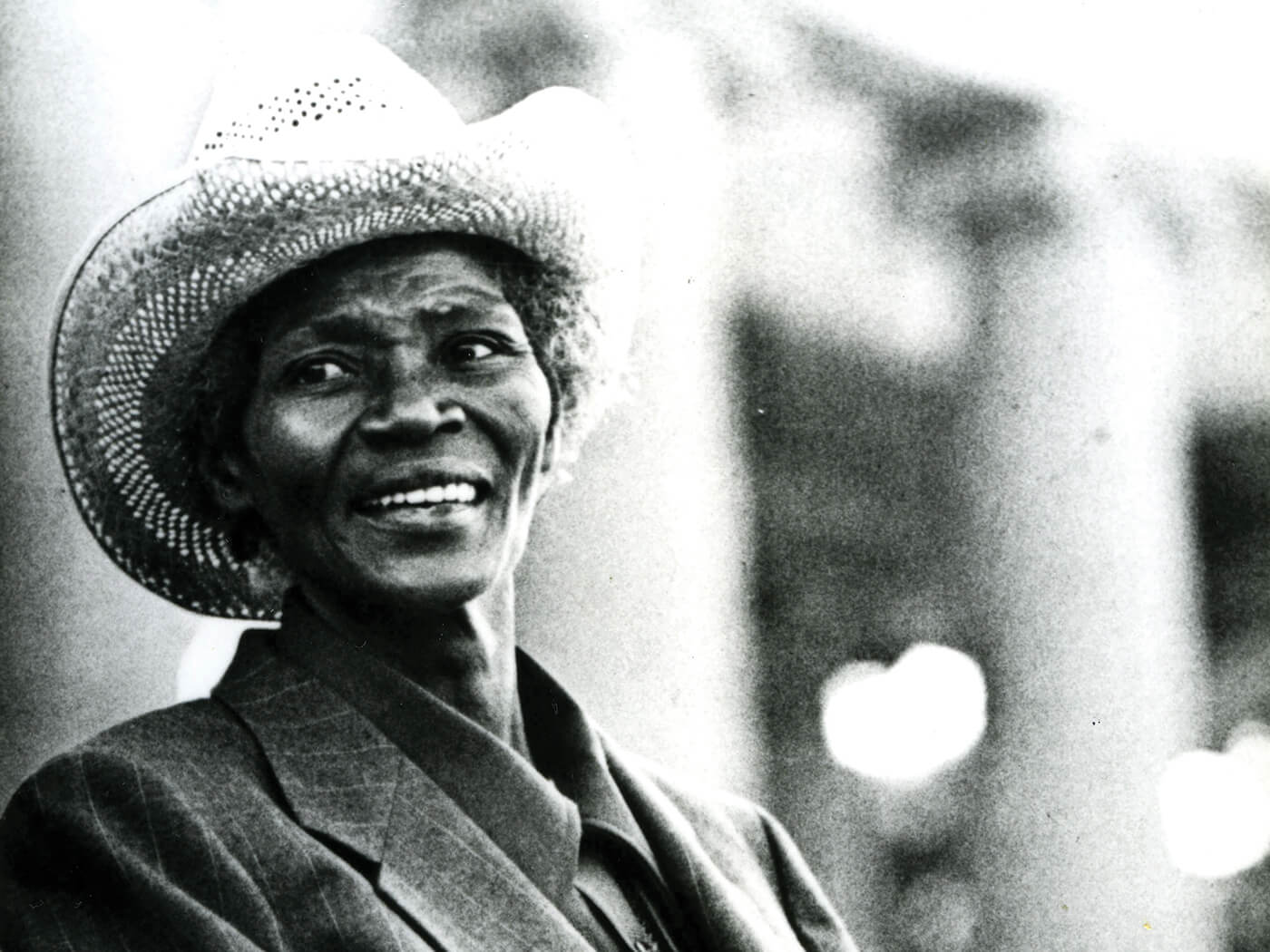 When Big Mama Thornton took the stage in 1977, she was struggling. Despite pioneering rock, blues and R&B in the 1950s, she’d been largely forgotten except as someone whose songs were covered and whose style was copped by Elvis and Janis Joplin, among others. Influence, however, doesn’t pay the bills. She toured continuously to survive, despite being so physically weak that she had to be helped onstage. Alcoholism hastened her decline and ravaged her voice, so that it was barely a squeak compared with the hurricane it had once been.

And yet, she gives one hell of a performance. What she lacked in physical power she more than made up for in sheer charisma, as though she’d learnt a whole new bag of tricks in order to sell these old songs to a new audience. Holding court in a folding chair and fronting a five-piece band, she pares down her once-blustery songs so that they’re quieter, weirder, spookier even. There’s a lot of space and silence in these numbers. Her band occasionally bows out for several measures, leaving Thornton to holler and howl in the void: declarations of determination, shouts of survival. Listen to the timing of her exclamations at the end of “Summertime”, how she puts an extra beat or two between her exclamations: “Your mama!/And daddy!/They may be standing over there!” It’s
a sly way to pull you into the song even as it’s ending, pointing to some comfort and security just nearby. “Said you don’t have to worry!”

Small yet intimate, renowned for its attentive and appreciative audiences, the Rising Sun Celebrity Jazz Club in Montreal was an ideal venue for Thornton at this point in her life. It hosted a steady series of old and neglected blues and R&B legends, including Lightnin’ Hopkins and Muddy Waters, and owner Rouè-Doudou Boicel recorded most of their sets. Sassy Mama was originally released in 1994 and again in 2005, but this version marks the first time it’s appeared on vinyl, appended with a vestigial remix of “Hound Dog”.

“Hound Dog” – also included here in a medley with Rufus Thomas’s “Walkin’ The Dog” – was crucial to her career and to her legacy. After touring the South as a drummer, singer and harmonica player in the 1940s, Thornton signed as a solo artist with the Houston-based Peacock Records. That she was openly and unapologetically gay alienated some of her peers, but her booming voice and mastery of so many instruments made her a popular attraction even before “Hound Dog” sold two million copies in 1951. Three years later, a white kid from Memphis mimicked her performance and outsold her five times over.

In the 1960s, Thornton relocated to San Francisco and played nightclubs up and down the West Coast. Joplin caught one of those shows and was mesmerised by the performance, in particular “Ball And Chain”. Thornton’s original barely beat Joplin’s cover to market, yet the latter was such a hit that the song was popularly associated with the white interpreter rather than the black originator. Like many of her peers, Thornton saw very little money from her own recordings, even less from other artists’ covers. Despite their intentions to honour her, Presley and Joplin were hindrances instead of boons, stalling whatever professional momentum Thornton had.

So they both become just names to drop in song introductions, as when she declares that she’s going to play “Ball And Chain” “the way I wrote it. [Janis] might’ve made some changes… I don’t know.”

Thornton instructs her band to play it like BB King, with a minimum of notes telegraphing a dark mood. “I didn’t say get ugly with it, I just said play it!” she says after a pretty gnarly guitar lick. At the end she deconstructs the song, wringing out every drop of meaning from each syllable.

Whether it’s a fast jam or a lowdown lament, Thornton had a way of crawling inside these songs and inhabiting them with force and humour. Sometimes that even means ignoring the song altogether. Just a few measures into “Watermelon Man” she starts in on an extended one-sided conversation with a producer vendor, using every trick to get herself free fruit. It’s like hearing one side of a phone conversation that escalates in completely unexpected ways: “You might not even know the kinda police I’m gonna call!”
she exclaims at one point.

It’s a fantastic and eccentric reimagining of a well-known standard that shows how Thornton could sing the blues without wilting under the weight of her own troubles or the troubles in the song. Instead, this Rising Sun set is more about shedding that burden: playing the blues to exorcise your demons. With every yelp, whoop and holler she’s staking out her place in the world, even if that place is neither as big nor as prominent as it should have been. “I ain’t goin’ nowhere”, she exclaims at the end of “Ball And Chain”. “I’m still sittin’ in this chair!”

Shonka Dukureh, an actress and musician who portrayed R&B singer Willie Mae “Big Mama” Thornton in this year’s Elvis biopic, has died at the age…

The cause of death of Elvis actor Shonka Dukureh has been revealed. The actor, who plays Big Mama Thornton in Baz Luhrmann’s biopic Elvis, died at the…

“Your Mama Don’t Dance” was an unlikely song, and an unexpected smash, for Kenny Loggins and Jim Messina. The lively track from the duo’s second…

Doja Cat has shared the video for her new track ‘Vegas’, which she recorded for the soundtrack of Baz Luhrmann’s new Elvis Presley biopic. READ…