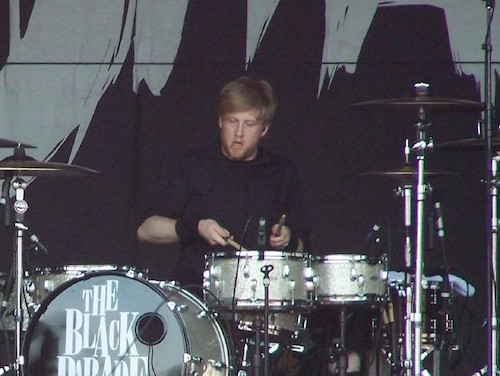 Former My Chemical Romance drummer Bob Bryar is auctioning off the C&C drum set that he used in the music video for “Helena” and to record parts of the 2006 landmark album The Black Parade.

The iconic set’s sale will mark the end of the musician’s drumming days, according to Bryar, and will be sold on eBay.

Read more: Tyler, The Creator drops anticipated new album ‘Call Me If You Get Lost

The instrument, which the musician says is the last of his drum kits to be auctioned off, is the same one used when My Chemical Romance opened the 2005 MTV Video Music Awards. Bryar plans to auction the kit via eBay and use the funds to benefit the Williamson County Animal Center in Franklin, Tennessee.

Bryar announced the sale and the end of his drumming days via Twitter.

its been a while. I hope everyone is doing OK.

I’m permanently closing the book on my drumming days. I have too many wrist issues, I’m too old, too fat, and it’s time for something new.

I just put my very last drum kit, the ‘Helena’ kit, on eBay.

Just like the other kits, the money will go to the Williamson County Animal Control and Adoption Center.

All of the details and pictures are in the eBay post. (link below) If I can figure out the password I will most more pictures on Instagram @bcbryar. I miss you all a lot!”

Sparkly and with paint so deep red that it almost appears black, the kit has a Three Cheers For Sweet Revenge-era finish that the drummer says is one of his favorites. Currently, the entire set is auctioning at $2,050 and includes a bass drum, rack tom, floor tom and snare drum with internal dampener. The listing also includes a custom-made road case for the drums, which the ex-drummer says cost $1,700 by itself.

Prior to posting his final drum kit for sale, Bryar sold other sets on the auctioning platform. In the sale post he wrote:

this is my very last drum kit and it’s ready for a new home. I used this kit when mychem opened the MTV VMA’s in 2005, the following tour, and for some of the parade record. you can youtube the VMA’s to see it in action.

the finish was created to match the helena days. it’s a very dark red sparkle that is almost black. it’s my favorite finish of all of the kits i’ve had. if you look closely there is still some confetti from tour that snuck into the bass drum hole. i’ll leave that in there for you.

I will include the road case that was custom made for it. the case has spaces for all of the pieces… the bass drum, rack tom, floor tom, and snare drum. it also has the my chemical romance logo from the continuing tour that we were on. if i remember correctly the case alone was $1700.

the drums have been in my house for a long time now so i can take these pictures now. the case is at the storage facility so i don’t have a good picture of it right now.

when/if they sell, i will go to the storage facility to get the case and i’ll add some other stuff while i’m there. i can add a DW9000 pedal and maybe a stand or 2 or whatever else i find in there.

just like all of the other drum kits, the money [is being] donated to the williamson county animal control and adoption center.

the sizes of the drums are very interesting and they sound awesome.

thank you for looking!

Read more: 15 standout artists on Spotify making music you need to check out

While the kit will certainly make any drummer happy, it marks the end of an era for the musician. Bryar first began playing with My Chemical Romance during Warped Tour 2004, having replaced Matt Pelissier after the band released Three Cheers For Sweet Revenge and served as their longtime drummer, playing from 2004 to 2010.

With the kit going on sale for significantly lower than market value, emo percussionists can now use it to form their own legendary band. You can find Bryar’s eBay listing here.

Will you be putting in an offer on the famous drum set? Let us know in the comments below!

Link to the source article – https://www.altpress.com/news/my-chemical-romance-bob-bryar-sells-drumset-auction/

My Chemical Romance have voiced their support for a proposed ‘Welcome To The Black Parade’-themed LEGO build. READ MORE: Five things we learned from our…

An Alex Van Halen-owned drum kit, which he used during VAN HALEN‘s 1980 “Invasion” tour, sold for $230,400 at an auction held this past weekend…

The rocker and Tama Drums team on the limited edition instrument. Continue reading… Link to the source article – https://loudwire.com/metallica-lars-ulrich-black-album-signature-snare-drum-tama/

UPDATE: April 27, 2021 11:41 AM ET After launching the My Chemical Romance “Welcome To The Black Parade” LEGO set idea, VNMBricks has reached the…