Californian rockers BUCKCHERRY have released the fifth video from their ninth studio album, “Hellbound”, for the track “54321”. The clip, shot on tour dates in Dallas and Oklahoma City, was directed by Kurtis “KasterTroy” Imel. The video follows clips shot for the tracks “So Hott”, “Hellbound”, “Wasting No More Time” and “Gun”.

In other news, BUCKCHERRY has announced the third leg of the 2022 “Hellbound” tour, starting in Des Plaines, Illinois on April 29. The dates follow the January/February co-headline run with THE LACS and the upcoming March/April dates supporting Alice Cooper. The 18-date tour features support from BLACKTOP MOJO and SUMO CYCO on 15 of the shows. The band will continue to tour in support of “Hellbound” through the fall of 2022. VIP packages will be available for all shows.

BUCKCHERRY on tour with BLACKTOP MOJO and SUMO CYCO:

“Hellbound” came out in June 2021 via Round Hill Records. The follow-up to 2019’s “Warpaint” was recorded in the fall of 2020 in Nashville, Tennessee with producer and songwriter-for-hire Marti Frederiksen, who has previously collaborated with AEROSMITH, DEF LEPPARD, Jonny Lang and Sheryl Crow, among many others.

In the summer of 2020, BUCKCHERRY recruited JETBOY‘s Billy Rowe as its new guitarist. He joined the group as the replacement for Kevin Roentgen, who left BUCKCHERRY in July of that year.

In 2019, BUCKCHERRY enlisted Francis Ruiz as its new drummer. He joined the group as the replacement for Sean Winchester, who exited BUCKCHERRY after laying down the drum tracks on “Warpaint”. 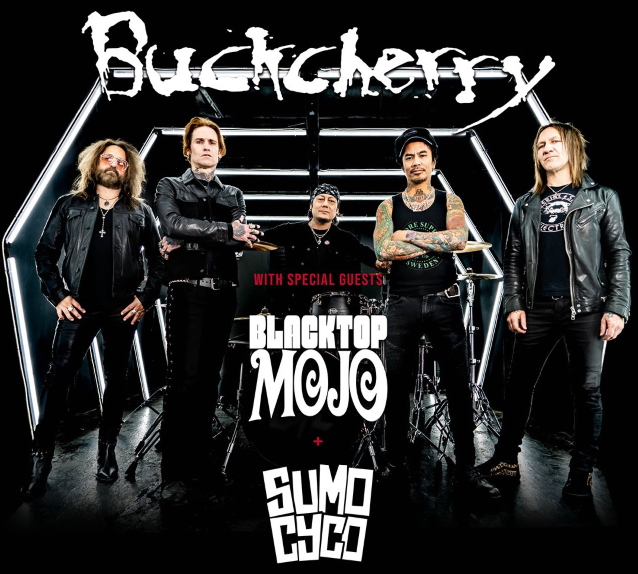 Link to the source article – https://www.blabbermouth.net/news/buckcherry-premieres-54321-video-announces-april-may-2022-tour-dates/

June 1, 2022 BUCKCHERRY frontman Josh Todd spoke to Radioactive MikeZ, host of the 96.7 KCAL-FM program “Wired In The Empire”, about the band’s plans…

After playing 100 shows in 2021, BUCKCHERRY kicks off 2022 with a co-headlining run with country rap rock band THE LACS. The 15-date trek starts…

In a new interview with Alicia Atout, BUCKCHERRY singer Josh Todd was asked about his first-ever tattoo, which he got years ago on his left…

April 20, 2022 Following a very successful run with ALICE COOPER, California-based rockers BUCKCHERRY have announced the final 2022 dates in support of their ninth…

August 29, 2022 BUCKCHERRY singer Josh Todd and guitarist Stevie Dacanay (a.k.a. Stevie D.) will head to Nashville in three weeks to finish the writing…