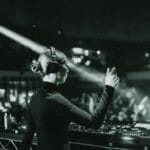 Capozzi can be found revving the engine on “911 Turbo,” a Confession label appearance that comes with plenty of horsepower. Rife with rumbling vehicular sound samples, quirky number is sure to appeal not only to gearheads, but also to house heads, some of whom recently spotted Capozzi on AC Slater and Tchami‘s Confession vs. Night Bass tour. For the Bay Area-hailing act, “911 Turbo” is a homecoming of sorts; the single sidles up with her recent Confession stints, “Hole In The Speaker,” “Thunder,” and “Bright Lights” with Wenzday. Give the low-end-indulging number a spin, and it’s clear that Capozzi is to Confession as peanut butter is to jelly; some collaborations just make sense, and Capozzi and Confession are one of them.

“911 Turbo” is a worthy addition to queues and—you guessed it—Capozzi’s stock of crowd-amplifying artillery. And with upcoming slots at Beyond Wonderland, Ilesoniq, and HARD Pacific Northwest, it’s sure to get more than just the occasional rinse. Hear Capozzi go all gas, no brakes below.

The post Capozzi puts pedal to the metal on ‘911 Turbo’ appeared first on Dancing Astronaut.

Link to the source article – https://dancingastronaut.com/2022/03/capozzi-puts-pedal-to-the-metal-on-911-turbo/

Tchami and AC Slater co-directing a label tour was one thing, but pulling together the finest names from both the Confession and Night Bass talent…

A newly announced collision between Tchami‘s Confession and AC Slater‘s Night Bass label will bring a whole lotta house, bass-house, and other variations of the…

by: Rachel Narozniak May 20, 2022 Tchami and Marten Hørger have long been in each other’s orbit, and after a slew of Hørger appearances on…