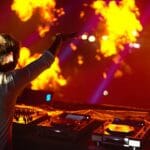 There is absolutely no doubt that “Levels” tops the list as Avicii‘s most iconic single. Exactly 10 years later, the track remains inescapable, and Avicii’s estate is celebrating the song’s milestone anniversary with the addition of his iconic performance from Osaka, Japan from 2016—one of his final sets before retiring later that summer—to Apple Music after it was first streamed on SiriusXM in 2020.

In addition to the HQ live set, Avicii’s final performance of “Levels”—a scene from his True Stories documentary that was only shown in theaters upon release—can also be streamed on his official YouTube channel. Avicii took to the stage one last time at Ushuaïa Ibiza on August 28, 2016, playing “Levels” along with Skrillex‘s remix as the crowd chanted his name.

“I couldn’t have asked for a better last show,” Avicii told attendees before he played the opening notes of the Etta James-sampled classic.

Link to the source article – https://dancingastronaut.com/2021/10/celebrate-10-years-of-levels-with-aviciis-iconic-osaka-performance/

Avicii announced his retirement from touring and music in March 2016 (though he eventually returned in 2017 for his final EP before his death, AVĪCI…

There are few tracks that, alone, have come to define an entire musical moment in time. Moreover, the list of songs that have singularly come…

Joining “Wake Me Up” and “The Nights,” “Waiting For Love” becomes the third track by Avicii to cross the 1 billion stream threshold on Spotify.…

In a recent interview with The Times, Klas Bergling, father of the late Tim Bergling, better known as Avicii, has opened up more about the…