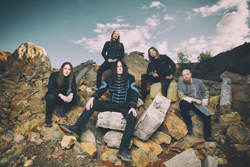 Swedish historical power metal force Civil War – founded by former members of Sabaton – returns with 10 new wartime anthems on their new album, “Invaders,” out via Napalm Records on June 17, 2022. Detailing harrowing stories of sorrow and tales of turbulent triumph from around the globe, as well as human nature itself, the album marks the band’s first with masterful frontman Kelly Sundown Carpenter and formidable shredder Thobbe Englund (ex-Sabaton).

“Invaders” grips with riveting accounts, ranging from Viking invasions and the greed of powerful nations to legendary Native American battles and magical Arthurian fantasy – all amid a profusion of enthrallingly dynamic vocals, epic soundscapes and impressive, technical instrumentals.

In celebration of this announcement, Civil War has delivered the first single and title track off of Invaders. The song “Invaders” is a powerful anthem with intense riffs and an epic chorus, telling of the legendary Native American victory at the Battle of the Wabash. With the track, Civil War gives a first taste of what new and returning listeners can expect from the new album. Stay tuned!

Daniel Mÿhr (keyboards) on the title track:
“As a first sign of life in what seems to be ages, we bring out the heavy artillery in the form of the title track from our upcoming album, Invaders. Inspired by the Battle of the Wabash, we tell the story of how the Native Americans fought foreign invaders when they came to claim their sacred lands.”

The album starts off with the captivating “Oblivion,” inviting the listener into an apocalyptic world with its exotic, menacing sound, strong vocals and heavy guitar riffs. Packed with epic symphonic power, Invaders continues with the war anthem “Dead Man’s Glory,” telling a story of Irish resistance – fighting to preserve their way of life against a Viking invasion. The album rages on with the retelling of legendary Native American victory at the Battle of the Wabash on the fast-paced “Invaders” and then settles into the pulsating, atmospheric “Heart of Darkness” before arriving at “Andersonville” – recounting the horrors of Confederate prisoner-of-war camp Andersonville Prison through the letters of a Union soldier to his wife. This song soars as a massive power ballad with heart-rending symphonics, choirs and emotive vocals. “Battle of Life” delivers the grand finale of Invaders as a pummeling, fiery power metal pinnacle, summoning listeners of all walks of life to persevere and call on inner strength in times of trouble. In keeping with the album’s theme, the Western-inspired heavy metal battle cry “Custer’s Last Stand” sees its 10th anniversary re-recording and re-release as a bonus track, entrancing the listener with Carpenter’s passionate vocal delivery, searing guitar harmonics, keyboard fanfares and tribal drums. With Invaders, Civil War prove they’ve once again etched a position all their own in the annals of modern power and heavy metal while proving their deft storytelling skill and knack for engaging lyricism. Invaders is a must-listen!

Daniel Mÿhr (keyboards) on “Invaders”:
“It took its time, but we’re happy and proud to present our new album Invaders to the world. Civil War is back in a nice, new uniform, and with Kelly Sundown Carpenter and Thobbe Englund joining the ranks we have finally put together our fourth full-length album. By taking one step in every direction we have taken our sound to even darker places, but also to more positive ones. But one thing remains the same – our roots in Heavy Metal!”

Link to the source article – http://www.metalunderground.com/news/details.cfm?newsid=153074

Belgian extreme heavy metal frontrunners Evil Invaders are back and ready to unleash their third album, “Shattering Reflection,” with full force on April 1, 2022…

Belgian unit Evil Invaders attack and take no prisoners! “Sledgehammer Justice,” the second single and most extreme song of their upcoming album, “Shattering Reflection,” is…