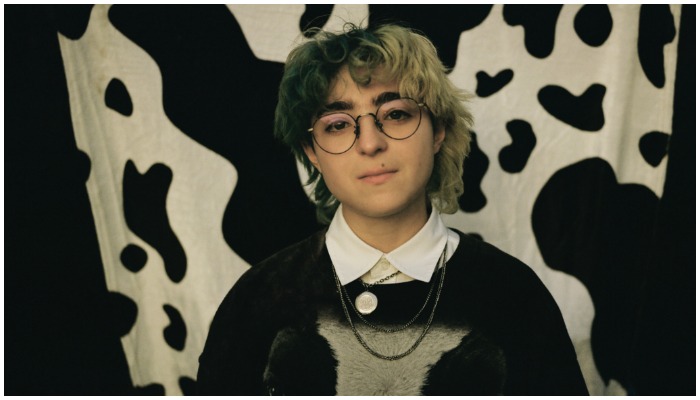 Claud is everywhere—billboards, magazines, online blogs and Times Square, just to name a few. “I’m not jaded about it. I’m more grateful that I have all that,” Claud says over a Zoom chat.

The rising artist released their debut album, Super Monster, in February to critical and commercial success. They simultaneously became the first artist to debut out of Saddest Factory Records, the label from Grammy-nominated artist Phoebe Bridgers. To say Claud’s future looks bright would be an understatement.

Read more: remy makes music for all the people who don’t fit in anywhere else

21-year-old Claud Mintz comes from Chicago but stays in New York and has family that they visit in Los Angeles, so their perspective on situations shifts with their surroundings. “I talk so much about where I am in my songs because I’m always in a different place,” they say. This adds to their creative process, as Claud is an artist of great depth who finds power in fragility. Listeners of their debut, Super Monster, can hear the thematic elements of trying to navigate the highs and lows of love and growth.

The 13-track record dives into personal situations through pop ballads, rap-like verses and pitched vocals, which allowed Claud to say their truth while maintaining some form of anonymity. However, this isn’t Claud’s first attempt at finding success through music, as they speak about their previous EPs under various monikers. In our chat, Claud discusses their upbringing and relationship with writing songs, learning from Bridgers and why they decided her label was the right fit and the overall message they hope listeners can take away from their strong debut LP.

I read that you had roughly 50-60 songs written before the album came about. What was it about these tracks that made them the chosen ones for the record? I’m aware you wanted to tell a specific narrative with your music, but I’m assuming that more of those 60 songs had to do with similar subject matter.

I don’t even know where to start with that. The huge demo list I made was a collection of songs from the last few years. They were about leaving Chicago and finding my footing on my own and the different hoops and hurdles and stuff like that. It felt cohesive to me because I kept running into the same themes and issues. That’s how the album came together. Then I took a few months this last summer to make sure I was saying what I wanted to say and that there was a message you could take from it.

With your first EPs Sideline Star and Toast, you immediately gained attention, with artists such as the Marías wanting you to tour with them. Did any of that prepare you for this album release and the attention that followed?

I feel like each EP was a different time in my life. With the Toast EP, I put that out when I was still in school, and then we got asked to go on tour with the Marías and Triathalon. I thought I should just try it, so I took a semester off school to try it, and after that tour, it led to another tour and then another tour. I feel very lucky for that, but it was never nonstop offers. I definitely worked really hard to get these bands to notice me and for people to listen to my music.

I find it interesting that you learned more about music and writing in school, but it wasn’t until you experienced real-life situations that you grew into an artist. Can you expand on this concept of nonlinear growth?

It’s definitely not a straight path. There is literally no curriculum for music. My growth was not linear, and that’s OK. I feel like artists think they will put music out and then go on tour, but it doesn’t really happen like that. You have to love your music and project so much that you can withstand all the bullshit that comes with it and all the little things you have to do to get one bigger thing.

The biggest thing for me is that I never fully went to [music school]. It can teach you technique and skill and the correct way to play the guitar, but it’s not going to teach you artistry. I don’t think anything can really teach you that—it just comes from the artist themselves. The voice inside them that tells them what they want to say. That’s where people get stuck. That doesn’t come the day you graduate college. It comes from time and getting to know yourself.

When configuring the tracks that make up Super Monster, was there any song in particular that proved difficult to rework or add rewrites to in order to have it fit the narrative?

I feel like production-wise, “Falling With The Rain” was a song I wrote two or three years ago, and it went through like four stages of production until we landed on the one that we ended up with. So that one was mainly because I couldn’t figure out how to present that song because I loved the writing of it so much, and I was attached to the story of it. I like the idea of ending my album with that song because I like the sentiment of “Things may be shitty right now, but you will get up and keep going.” I remember “Soft Spot” took a few days to write as well. A lot of the songs on the album are the type of song that came to me quickly.

There are many intricacies to the album, such as pitching your voice on certain songs and that being the idea of becoming a new persona or having the subject matter be a little too sensitive for you to share. Thus, pitching your voice provides some form of anonymity. Can you expand on this decision? The entire album is a very fragile sentiment.

I love pitching my vocals. I get a lot out of it. It’s almost like a different instrument for me. Like with “Guard Down” when I pitch my vocals with the rap-type verse, I was like, “I really want to try almost rapping but singing very fast.” I was so scared to do it, but I wrote it down and freestyled it. I said, “Here’s what we’re going to do. I’m going to do this, and we’re not going to listen back to it. We will put it on and immediately pitch it so that we don’t listen to my vocals.” It made it so much easier to listen to and work with because I wasn’t embarrassed. That’s not me—that’s somebody else. [Laughs.]

Regarding Saddest Factory Records, what were those first conversations like with Phoebe Bridgers, discussing where she was coming from with making her label and your vision for what you wanted your album to be?

I didn’t even have an album yet when she reached out to me. She reached out before Sideline Star came out and talked to me because she liked it. I guess someone sent it to her before it came out, and she really resonated with it. I was so stoked that she liked it, and she came to a couple of my shows while I was touring it. We had conversations for maybe six months about how she wanted her label to look and how I envisioned the rest of my career going and how I looked at my project. Both really aligned. On top of it, Saddest Factory is part of Secretly Group and Dead Oceans, which is a label group I really admire and have loved for so long. They have amazing artists. It felt like the stars aligned.

You’re a fan of Daniel Johnston and his juxtaposing themes of superheroes and monsters. You’re not inherently good or bad—you’re something in the middle, and that’s OK. It’s about decision-making and choice. Was this your reason for making yourself on the album, which pulls its name from a Johnston sketch, half blue and half green, with your face being yellow to represent timeliness with good and bad on each side?

I love the juxtaposition of Super Monster. That’s also why I did two colors in my hair. My hair has always been some form of green for the last two years, so I wanted it to be green and blue because it reminded me of the grass and the sky or the trees and the clouds. It all fell together nicely when I noticed this theme of falling somewhere in the middle of two binaries in all sorts of ways.

For most people, no one is inherently good or bad, and Daniel talks a lot about that in his work. On my album, I talk a lot about how growth is not linear and how there’s no point A to point B. It’s like zigzagging. On top of it, it was super cool that it was just a sketch of Daniel’s that they just found. I was talking to Daniel’s manager about it, and he said that it’s so wild that I have it now and have shown it to the world because it probably wouldn’t have made it out of Daniel’s basement.

I love the idea of your album saying it’s OK to be in the middle. It’s OK to be fragile and mess up sometimes, and being self-aware of that is key.

I really want to reiterate that growth isn’t linear. I spent years beating myself up over it, like, “Why can’t you play this bassline yet, or why aren’t you better at production?” It got me nowhere, personally. It wasn’t until I loosened the reins on myself and gave myself the space and time to breathe and be creative. The voice is always there saying you have to be productive, whatever that means. Your true creative form only comes out when you’re able to mute that voice.

You can read the full interview with Claud in Alternative Press issue 393, available here.

The post Claud knows that musical growth is “definitely not a straight path” appeared first on Alternative Press.

Link to the source article – https://www.altpress.com/features/claud-super-monster-issue-393/

MUNA have signed to Phoebe Bridgers’ record label Saddest Factory Records. The LA-based trio, who released their debut album ‘About U’ in 2017 before dropping its…

Thanks to the internet, our exposure to new artists isn’t reliant on record deals and radio hits. Alternative artists of all ages have been able…

The world of music can be an incredibly intimidating force for someone who aspires to enter it yet doesn’t know where to start. In recent…

DE’WAYNE has released his latest single “Stains.” The song was accompanied by a psychedelic animated visual which sees the artist surfing across L.A. in pursuit…