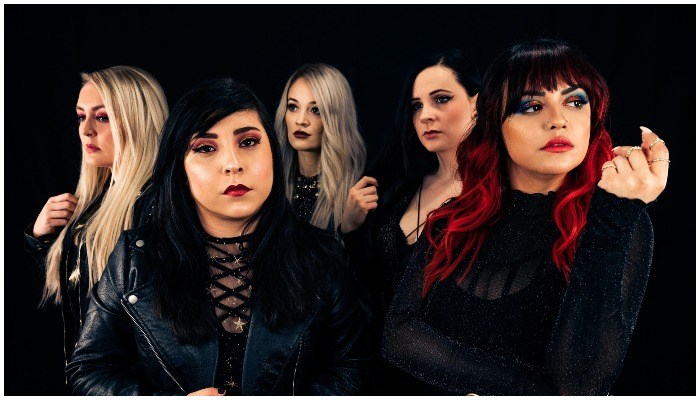 “Messy” has a powerful message about managing relationships, both romantic and platonic. It also stresses the importance of living an authentic life and knowing your worth.

The group warn of the danger of ignoring red flags and becoming complacent in your relationship. If you constantly push things aside, they will build up until you can’t ignore them anymore.

The song’s meaning starkly differs from the visual, which uses moody blue lighting and colorful laser beams for a clean-cut atmosphere. Lead vocalist Kiarely Castillo, guitarists Kristen Sturgis and Izzy Johnson, vocalist/bassist Janel Duarte and drummer Samantha Landa all have coordinating outfits. Paired with fishnets and chains, their cohesive look lends to the darker feel of the track.

Read more: Creeper’s Will Gould never expected his Salem side project would be so massive

The all-female hard-rock/metal group are known for their intense, anthemic songs, and “Messy” is no different. Head-banging drums and guitar riffs smoothly combine with Castillo’s soaring vocals to create the song’s addictive sound. However, the track also showcases the group’s new mentality on their music and their ability to step out of their comfort zone.

The song follows their last single “Chemicals,” which was the band’s first new song since their 2015 self-titled album. Released in late 2020, “Chemicals” touched on addiction from the perspective of an artist. The song was later given acoustic and remixed counterparts. Together, “Chemicals” and “Messy” mark a new era for the group both sonically and mentally.

“We know everyone’s been dying to hear what we’ve been up to, and the short answer is that we had just taken a bit of a break to focus on our personal lives,” the band said upon the release of “Chemicals.”

“We had a lot of time to reflect on what direction we wanted to go in next,” they continue. “I think collectively, our musical tastes have all evolved. We still wanted to feel heavy and anthemic, but it was important for us to step outside of our comfort zone moving forward.”

You can watch the video for “Messy” as well as exclusively read about the song’s inspiration and more below.

Where did the initial inspiration for “Messy” come from, and what statement did you want to make?

KRISTEN STURGIS: “Messy” is a song about being in a toxic relationship and wondering how and when it got to that point. I think most of us have been in a similar situation at one time or another. It’s difficult when you’re on the road, unable to see your significant other, away for months at a time. But I imagine it’s more difficult for the ones who are left at home. On the road, you’ve at least got your bandmates.

In crafting this song, what was the creative process like from that initial idea to the final song and visual?

JOHNSON: Kristen really laid the foundation of this song. After the lyrics/chord structure was finalized, Kia put her own spin on the vocals while Kristen and I got together to write some finishing guitar parts here and there to complement Kia’s part. This is going to be a fun song to play live because of its energy and simplicity.

What’s the most important thing you hope fans take away from the song?

STURGIS: I think the important takeaway to this song is to know your worth, whether that is in friendships, romantic relationships or work life. It’s easy to get complacent in a toxic environment. You think you’re better off walking on eggshells than being alone. But at some point, you wake up and realize it’s taking a toll on your mental health. So there needs to be a fundamental change in your relationship or change in your environment. Easier said than done, though.

Walk us through your thought process behind the track’s visualization.

JOHNSON: The song is called “Messy,” and we definitely wanted to envision that with the lasers/video edits. My personal favorite part is Kia’s eye makeup change for the last chorus.

SAMANTHA LANDA: The video is an antithesis to the title and lyrics because it has such a simple and clean atmosphere. But there are occasionally “glitches” in the visuals that reflect how not everything that looks clean and put together on the surface is perfect—that there can be underlying issues threatening to break through the facade. Kia’s face also looks really put together at the beginning of the video, but by the end, the makeup reflects the lyrics. She’s had to go through that “messy” transformation.

STURGIS: We actually ended up using a champagne glass in front of the camera lens for some of the distorted shots, which is referenced in the song. We all know drinking can fuel bad decisions. So it was cool adding those spur-of-the-moment details to the video. [It’s] life imitating art imitating life.

What should fans expect from Conquer Divide in the future?

JOHNSON: More songs and more variety. For our fans who are craving something a little bit heavier than “Messy,” they won’t need to wait long… I’m also hoping for some tour announcements soon. We are just trying to be patient with that.

STURGIS: We’ve all grown so much since our first record. We have a lot of introspection and did a lot of soul-searching about which direction to take the band in next, and we can’t wait to share what we’ve been working on. We love all music, from pop and EDM to rock to metalcore to even death metal, so I think we would get bored creatively if we stuck to one style for every song. Although “Messy” is a bit on the lighter side, we will definitely have something for everyone on our second album. While we were on hiatus, I’ve been honing my songwriting skills and dabbling in electronic sounds, which is an entire rabbit hole in itself. Plus, we’ve been working with Tyler Smyth and Joey Sturgis, and it’s like the dream team for us. We also worked with Eli Strobeck on production for these last two releases, and he is insanely talented as well. It’s been a slower process being independent at the moment, but we’re having a blast, and we are very excited to get our new music out to the world.

The post Conquer Divide step out of their comfort zone with “Messy”— watch appeared first on Alternative Press.

Link to the source article – https://www.altpress.com/features/conquer-divide-messy-video/

Conquer Divide premiere a new music video for their new single “Messy“ streaming via YouTube for you below. Tells the band’s Kristin Sturgis about it:…

Wolfgang Van Halen has released the official lyric video for the song “Think It Over” from his solo band, MAMMOTH WVH. The track will appear…

Wolfgang Van Halen has released the official lyric video for the song “Mammoth” from his solo band, MAMMOTH WVH. The track will appear on MAMMOTH…

Continuing to build upon the release of the tracks “Don’t Back Down” and “Think It Over” last month, MAMMOTH WVH is releasing another track from…

THE END MACHINE, the new band featuring two members of the classic DOKKEN lineup — George Lynch (guitar) and Jeff Pilson (bass) — along with…