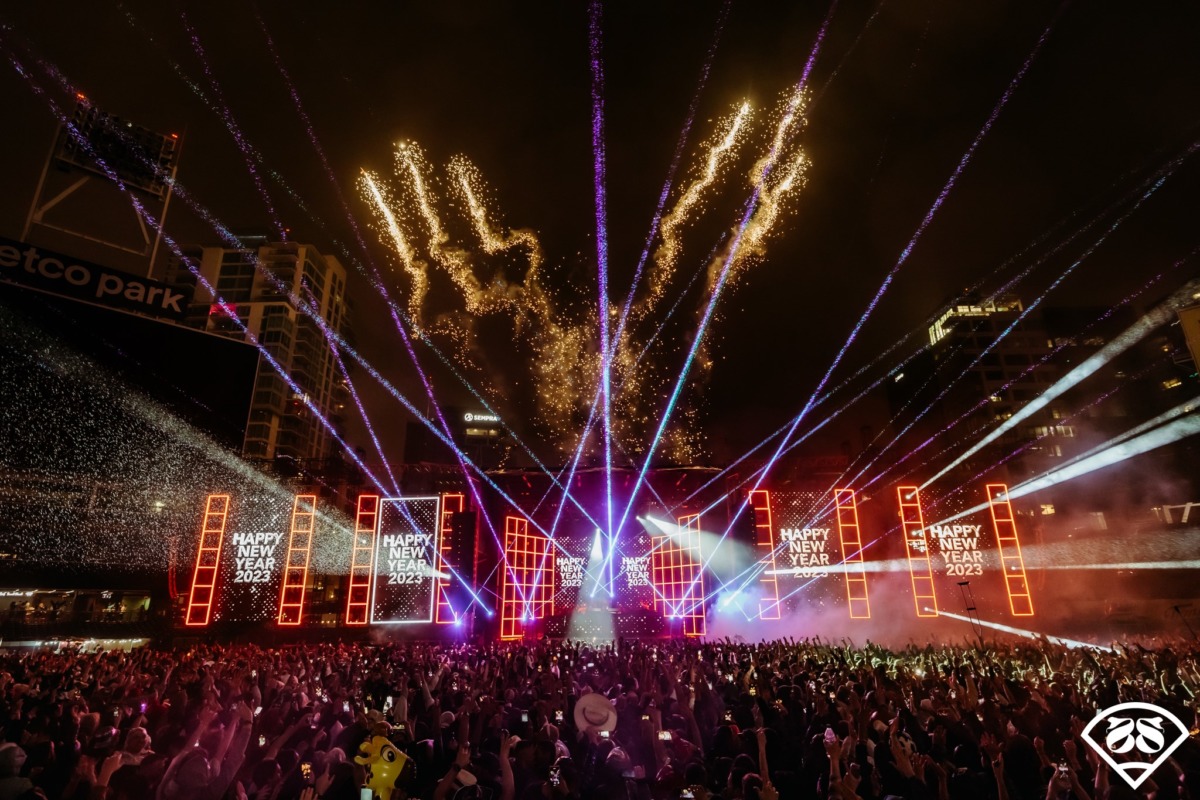 On New Year’s Eve in Southern California, a rare stroke of fate swept through San Diego. At CRSSD’s debut New Year’s Eve and New Year’s Day music festival, rain and wind poured into the city with singular gusto. But the onset of California’s worst storm in years proved a minor inconvenience for the event’s thousands of house music lovers. Despite the blustery backdrop, the biggest and best names in dance music flocked to San Diego to ring in the New Year at Petco Park.

Day 1 featured a plethora of exciting performances from Dancing Astronaut Artist to Watch in 2023 Azzecca, Dancing Astronaut 2021 Breakout Artist of the Year John Summit, Chris Lake, and plenty more. Inciting a welcomed frenzy on the Mainstage and inside the Major League Baseball stadium, Mau P delivered a set full of unreleased ammo including his signature “Gimme That Bounce.” Another one of Dancing Astronaut’s Artists to Watch for 2023, the producer behind “Drugs From Amsterdam” brought an early and energetic crowd to the big stage. One of the most-anticipated sets of the weekend was none other than Afterlife mainstay, Colyn. Tasked with Proper’s debut Sunset slot, Colyn injected over an hour of rapturous melodic techno and progressive house into the San Diego crowd. With a tracklist including Prydz’s “Pjanoo,” and a resplendent tribute to Faithless in the form of “Insomnia,” Colyn curated a deliciously dynamic set for the CRSSD community.

Making a quick pit stop before heading to a back-to-back set with Kaskade in San Francisco, John Summit invaded the mainstage with an hour and a half of non-stop hammering tunes. Using his recent weapons, “Revolution,” “Lipstick,” and even an ID remix of CamelPhat and Anyma’s “The Sign,” Summit put on an unrelenting performance at the apex of the two-day festivities. Mixing menacing, Drumcode-style techno, with tech-house, and even melodic techno, Summit flexed his undisputed title as an eternally amorphous taste-maker.

Closing off the final set of the first night was Black Book records label boss Chris Lake. Starting off his performance with his own remix to the recently released “Rumble,” the veteran DJ set the tone for a heavy night of house music. With plenty of IDs sprinkled in with “In The Yuma” and even some Anti Up—Lake’s lauded dual project with Chris Lorenzo—Lake proved why he was a go-to for the prime time slot for Proper.

Day two was decidedly less rainy, and although plenty of clouds converged over the event, the music and attendees’ sunny dispositions shined bright despite the plight. Tinlicker got things started on the Field stage, bringing their often-delicate, always-enveloping brand of melodic house to Petco Park. The set featured records from their 2022 album In Another Lifetime as well as Anjunadeep cut “Be Here and Now” with Nathan Nicholson, “Children” with Robert Miles, and their chilling remix of Sian Evans‘ “Hide U.”

Next up was one of Dancing Astronaut’s Artists to Watch in 2023 Kevin de Vries who played a towering set at the Park stage. Starting hot with his Afterlife-backed record “Dance with Me,” de Vries’ rise arrives in perfect tandem with the record label’s ascent, earning the nod as Dancing Astronaut’s 2022 Label of the Year. The set featured numerous IDs that we hope to see earn proper releases in the coming year, including Anyma’s haunting remix of Fred again.. and Swedish House Mafia’s “Turn On The Lights again..” From Tinlicker’s sobering house melodies to de Vries’ thumping techno, even the most insatiable music lover couldn’t have gone thirsty on the first of January with CRSSD.

After two melodic sets, it was time to turn the festival thermostat up a few degrees and head over to the Terrace stage to check out Westend. Situated on the concourse at the outskirts of the stadium, the set’s background featured awe-inducing views of the Coronado Bridge and San Diego Bay. Topical as ever, he enamored the crowd with his new edit of the White Lotus theme song, as well as other favorites from his catalog, including Sonny Fodera, Gorgon City, Danny Howard and Stevie Appleton‘s “Remember” to name just a couple.

The party continued back at the Field stage to take in a high-energy set from perpetual mischief-maker, FISHER. Over the course of the hour and a half he wreaked havoc with “You Little Beauty,” “Yeah The Girls,” “It’s A Killa,” “Stop It,” and his preternatural sensation “Losing It” reminding the crowd of that bombastic and beautiful fever that took hold in 2018. But it wasn’t all FISHER originals. He rinsed Mau P’s much-hyped ID “Bounce” before closing his set with his rework of Bob Sinclair‘s “World Hold On.”

HI-LO closed out the weekend back at the Park stage with a gritty techno set featuring staples from the Oliver Helden‘s techno alias like “Kronos,” “Mercury,” and “Rabbit Hole.” Heldens describes his HI-LO alias as one reserved for only his “deepest and darkest records” and proved it with 90-minutes of pure unadulterated techno. He played out his newest release “Samsara” with serial collaborator Reiner Zonneveld and supplemented the set with edits of some of the biggest tracks from 2022 like “Turn On The Lights again..” and “Consciousness” as well as deeper cuts like the Drumcode-backed “Qualia” by Zimmz.

All in all, Proper NYE/NYD served as a dance music lover’s ideal send off to 2022 and an even better beginning to what’s ahead for 2023. FNGRS CRSSD and their CRSSD brand never fail to deliver, but given the circumstances of a brand new festival and suboptimal weather conditions, it further solidifies that notion and reaffirms them as one of the premiere house and techno promoters in the world.

Link to the source article – https://dancingastronaut.com/2023/01/crssds-proper-nye-debut-closes-out-2022-in-style-review/

by: Rachel Narozniak Apr 1, 2022 John Summit‘s got a white-knuckle grip on the charts that only continues to tighten, and this go-round, it’s his…

by: Alex Lambeau Mar 27, 2022 It was only a matter of time before John Summit would announce his own record label or event brand.…