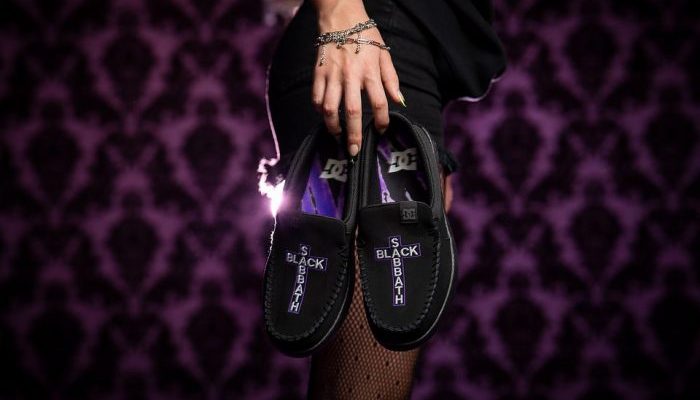 If you’ve ever wanted to rep Black Sabbath on your feet, here’s your chance. The band’s collaboration with DC Shoes is now available.

The collection, which dropped on Halloween, consists of footwear and apparel to commemorate the 50th anniversary of the group’s iconic 1971 album, Master Of Reality.

The lineup for the collection touts the iconic Black Sabbath logo on various apparel. This includes long-sleeved shirts and T-shirts, shoes, sneakers and sweatshirts, available in the album’s signature purple, black and white color scheme.

Read more: In issue 400, twenty one pilots reveal the importance of their community

Master Of Reality is widely recognized as one of the greatest heavy metal albums of all time. Its influence can be felt in several genres, including stoner rock, grunge and doom metal, among others. It also emerged as a major musical influence on the skateboarding scene.

The DC X Black Sabbath Collection was made in collaboration with the music-centric fashion brand Bravado.

In addition, DC Shoes has put out a limited-edition tribute album, Shadow Of Reality, which covers Master Of Reality in its entirety.

Read more: Every Time I Die’s Keith Buckley on daring himself to make ‘Radical’

Skateboarders Danny Way (who is a longtime Sabbath die-hard) and Evan Smith with the band UVWAYS also contributed to the album, covering “Embryo” and “Children Of The Grave,” respectively.

The cover art for Shadow Of Reality was created by artist BB Bastidas. The covers album is limited to 1,000 promotional copies worldwide, only available on vinyl.

You can check out the DC X Black Sabbath Collection here. Let us know which items you are picking up in the comments below.

Link to the source article – https://www.altpress.com/news/dc-shoes-black-sabbath-collection-master-of-reality/

When Black Sabbath released the doomed-to-fail Never Say Die! in 1978, the irony of the title was lost on nobody — including the band. The metallurgists…

Nothing has been the same since Feb. 13, 1970. Continue reading… Link to the source article – https://loudwire.com/black-sabbath-album-anniversary-invent-metal/

It was the second and last with Dio for over a decade. Continue reading… Link to the source article – https://loudwire.com/black-sabbath-anniversary-mob-rules/

It was supposed to be a Tony Iommi solo album. Continue reading… Link to the source article – https://loudwire.com/black-sabbath-seventh-star-anniversary/