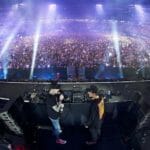 A debut single is a statement for any artist. But when it comes from two household names who’ve made the choice to lean away from their piecemeal collaboration style of years past to lean into nurturing the creative synergy that’s always been there, it carries a different weight. In that sense, “Escape,” the first production formally credited to Kx5, comes with heavy significance. It’s a sentiment felt by both deadmau5 and Kaskade, who are now ready to tap into the possibilities that continuous collaborative interplay can yield. And although they’re charting new territory by formally installing an alias 14 years in the making, which symbolizes their commitment to a steadier type of collaboration than they’ve ever indulged in together, they’re not looking to reinvent the wheel—at least, not yet.

“We’re not out to alienate any fans of previous collaborations we’ve done [by saying] like, ‘Hey, here’s a hot new trap beat,’ you know?” deadmau5 told Dancing Astronaut in an exclusive interview. “I think it’s pretty cool that we were able to keep that kind of consistency.”

“Consistency” is a referent to the type of sound that deadmau5 and Kaskade instilled on “I Remember” (2008), “Move For Me,” (2014), and “Beneath with Me” (2016), a “melodic, sing-songy” brand of house that “kind of allude[s] to that progressive house sound of the early 2000’s,” in deadmau5’s own words. It can be heard on “Escape,” a joint mau5trap and Arkade release that features vocals from Hayla. If “I Remember” was part of an album, “Escape” would be track number two, says deadmau5, citing its congruency and cohesiveness with the “vibe” they previously set on the former, which is widely regarded as their most seminal musical meeting to date.

And although “Escape” harkens back to a much-loved, still-celebrated time in deadmau5 and Kaskade’s collaborative history in its sonics, thus supporting its release as Kx5’s first single, per Kaskade, it won’t be of a rinse and repeat variety as Kxd further takes shape. “We’ve got a handful of things that are in the oven. For me, certainly as I listen to [‘Escape’], it’s the safest thing because we’re kind of coming outta nowhere with this [alias], right? But I think these next steps are where it kind of unfolds and we really find our footing, and I do think we will push people a little bit,” Kaskade added.

As what’s to come continues to cook, stream “Escape” below.

Link to the source article – https://dancingastronaut.com/2022/03/deadmau5-kaskade-consummate-kx5-alias-with-debut-single-escape-featuring-hayla/

by: Ross Goldenberg Jun 3, 2022 Pairing one of the year’s biggest releases thus far with Dancing Astronaut‘s 2021 Breakout Artist of the Year couldn’t…

by: Alex Lambeau Mar 30, 2022 Dance music giants from the early 2010’s are experiencing a strong resurgence this year with headlines like the return…