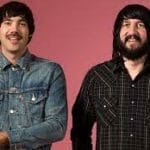 With the release of their latest album, Is 4 Lovers, Death From Above 1979 treat listeners to a seamless blend of electronic music and punk rock. From punk-based sounds filled with rapid guitars and angsty high energy to more electronic sounds that urge listeners to dance, Is 4 Lovers highlights how various genres can be mixed together in order to create a unique sound.

“One + One” had been inspired by Sebastien Grainger’s wife’s pregnancy, and acts as the karmic sequel to the band’s 2004 track, “Romantic Rights.” “NYC Power Elite Part I” pokes at wealthy New Yorkers, highlighting those who pose as starving artists while affording “helicopter brunches.”

Certain tracks, such as “Glass Homes,” have more of a focus on the band’s electronic sounds, while tracks like “Mean Streets” bring a harder punk edge. Stream Is 4 Lovers in its genre-fluent full form below.

The post Death From Above 1979 lace punk with electronic on ‘Is 4 Lovers’ appeared first on Dancing Astronaut.

A lush display of intimate storytelling, ATTLAS returns to the limelight in collaboration with MAYLYN for their “Into Arms Of Lovers.” The pair’s honeyed single is available worldwide now, and…

Hot off his release of piano house single “Not Enough,” Staten Island’s Zack Martino returns to the Armada imprint and his roots with “Snow White” featuring Kyle Reynolds. Fusing house…