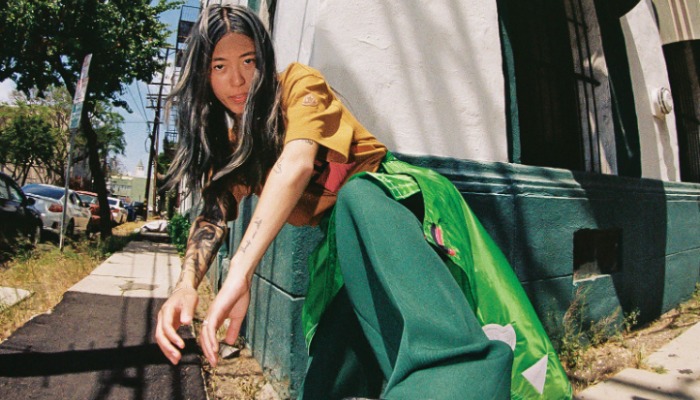 Deb Never has released her highly anticipated second EP, Where Have All The Flowers Gone? The project features production from Jam City, Jim-E Stack, Michael Percy, Luke Wild and more.

The eight-song EP showcases just how much of a musical expert Never has become. Constantly bridging the gap between genres, Never dances from alt-rock to hip-hop and from grunge to pop, without ever missing a beat.

Never announced the release on Twitter, assuring her audience of the EP’s “good luck.”

WHERE HAVE ALL THE FLOWERS GONE? EP OUT FINALLY 9.10 pre save now for good luckhttps://t.co/KUjA81o3lq pic.twitter.com/b6uEE6pjus

She also took to social media to announce holding an “intimate” release show in New York Sept. 7 to celebrate the EP.

Never’s passion for playing with genre and mood became clear early on in the project through the release of “Sorry,”  one of the first singles from the EP. Never spoke about her love for experimentation in music in an exclusive interview with Alternative Press about the track.

“I like playing with juxtaposition in my music, never fully leaning into a definitive genre, always teeter-tottering in the middle,” she told AltPress. “With that being said, ‘Sorry’ could’ve been a clear pop song, but I wanted to make it in my own way, which I suppose is low-key. Maybe that contrast is what makes it have a unique sound, as you say. I like experimenting and seeing what I can get away with.

“I like starting a song in one mood and ending in another,” Never continues. “First half [of ‘Sorry’] is vulnerable and broken, just like the video. The second half of the song is like this healing process, ending with this kind of ‘Haha fuck you, see ya never’ energy.”

Check out the video for “Sorry” below.

Never also previously dropped “Disassociate,” which Never called her “favorite song off the project” in a tweet.

this my favorite song off the project can’t wait to invade ur ears go presave Disassociate https://t.co/J11nd9OIHV

Last came the release of “Sweet & Spice,” a collaboration between Never and Jim-E Stack (Charli XCX, Caroline Polachek, Joji) that serves as a sonic pros and cons list that anyone who has ever experienced a love-hate relationship can relate to.

Never began her career experimenting with different bands, later moving from the Pacific Northwest to Los Angeles to make it on her own. She released the House On Wheels EP via WEDIDIT in 2019, drawing inspiration from various ‘90s artists. Afterward, she worked with Kenny Beats on “Stone Cold” before releasing the Bandcamp-only Intermission EP.

Never spoke about House On Wheels in an interview with Billboard.

“I wanted the project to embody me as a person and give people a better understanding about what I like and what I’m like,” she says. “Like, ‘Oh, you’re crying, but you’re gonna dance.’”

Although written about the previous EP, the sentiment of dancing through tears can easily be applied to Where Have All The Flowers Gone? But it’s important to remember one thing: Never’s music may be a lot of things, but it isn’t sad. According to a 2019 FADER Magazine interview with Never, “It’s just honest.”

Where Have All The Flowers Gone? tracklisting:

Never is set to support slowthai during his Hell Is Home tour kicking off in March.  Purchase tickets here, and check out all of the Never’s live performance dates below.

The post Deb Never’s new ‘Where Have All The Flowers Gone’ EP is a must listen appeared first on Alternative Press.

Link to the source article – https://www.altpress.com/news/deb-never-where-have-all-the-flowers-gone-ep/

Deb Never has released an angst-ridden new video for her latest single “Sorry.” The song is the first track from an upcoming project due out…

Jorja Smith has announced her first project in two years and has shared new song ‘Gone’ – listen to it below. READ MORE: Jorja Smith…