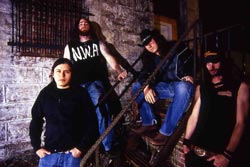 Indiana-based death/thrash outfit Demiricous premiere their comeback album “III: Chaotic Lethal” ahead of its official release later today, May 13th. That album is the group’s first full-length outing to emerge since 2007 and can be streamed in its entirety below.

“‘Chaotic Lethal‘ is our nail through the heart and brain of the underground. This is us delivering our brand of grime and savagery back into an otherwise over produced and overly polished modern metal scene.

A tale of Greed, self righteousness and the unwillingness to learn…Kicking in every direction with possessed riffs, psychotic reactions, criminal reality, suicidal drumming, and the ever rotting human condition. This is ‘Chaotic Lethal‘.”

Link to the source article – http://www.metalunderground.com/news/details.cfm?newsid=153377

Demiricous‘ comeback full-length “III: Chaotic Lethal” has been scheduled for a May 13th release date by Post. Recordings. A new advance track from that outing…

Sweden’s psyched out avantgarde death metal quartet Reveal! premiere the pre-release full-album stream of the band’s upcoming new album “Doppelherz”, which will be out in…