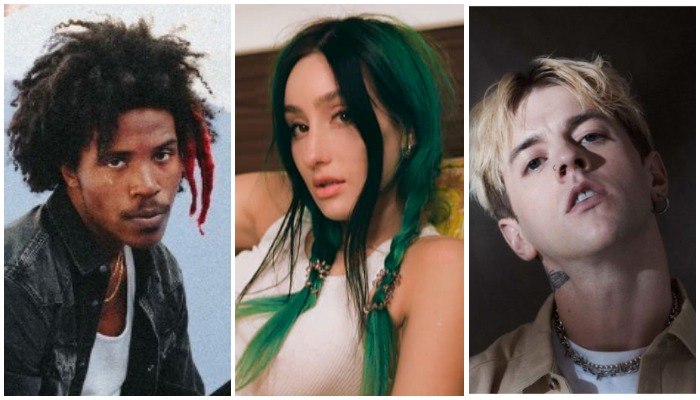 DE’WAYNE, American Teeth and phem are all joining forces on an addictive new collab, “SICK.”

The track touches on knowing that certain bad habits will make you unhappy, sad or angry but not wanting to give them up.

Each of the three singers have their own unique sound, and “SICK” perfectly blends them into a mix of indie, punk and rock sensibilities.

DE’WAYNE exclusively told Alternative Press about his excitement for the track. “American Teeth and phem already had such a great record,” he says. “And when they hit me for it, I just wanted to take it all the way home for them.”

Elijah Noll of American Teeth also shares, “The song is a celebration of accepting my bad habits and owning myself fully. We’re all a little ‘SICK’ and that’s okay. This was my first collaboration with phem and DE’WAYNE — I’m a fan of both artists, so it was a lot of fun to work on this one together, along with [producer] Colin [Brittain].”

American Teeth teased fans with a snippet of the song on social media last week. Both DE’WAYNE and phem commented on the post, with phem saying it’s “the best song that’s evr been created” and DE’WAYNE saying, “’bout to go crazy.”

Read more: KOAD is “on some bullshit” in his new music video—watch

This collaboration follows big releases from all three singers this year. After releasing a handful of singles, including “Still Not Dead” featuring DREAMERS and Wes Period, American Teeth joined forces with Onlychild on “Sloppy.”

Read more: 10 women who made the ‘90s one of the most memorable decades of music

DE’WAYNE released his debut full-length, STAINS, in June via Hopeless Records. The 11-track project, which includes the single “Perfume” featuring Awsten Knight, is an authentic glimpse into the singer’s existence.

In an exclusive interview with Alternative Press, DE’WAYNE discussed his thought process behind crafting the album.

“I just wanted to tell my story over these songs,” he says. “I really was like, ‘OK, this is my debut album.’ Not to be like, ‘I want to be different,’ but I wanted to make a project that was innovative and forward-thinking and not just of the time—something that I can listen to in a few years or five years and still be proud of it, because I know what’s hot right now and what’s good right now, but I want it to be also important in a few years. So I just want to take every story that I had 25 years leading up to making one album.”

DE’WAYNE, American Teeth and phem all appeared in the 100 Artists You Need To Know issue, which you can find here.

Link to the source article – https://www.altpress.com/news/dewayne-american-teeth-phem-collab/

American Teeth, the solo project of Elijah Noll, has announced his debut album We Should Be Having Fun. The album’s announcement was accompanied by the new…

Not long to wait either! American Teeth have announced the details of their debut album. Here’s all of the info: 1) It’s called ‘We Should…

After more than a year devoid of live performances, with countless album and project delays, there’s no doubt that 2021 has delivered some exciting releases.…

In part one of this round-table conversation, Amy Lee, Lzzy Hale, Taylor Momsen and Maria Brink flipped the script. “I was thinking women’s empowerment is if we didn’t talk…

American Teeth, the pop-rock, synth-tinged solo project of Elijah Noll, debuted his raw music video for the single “Fix You” via Fearless Records. The track…