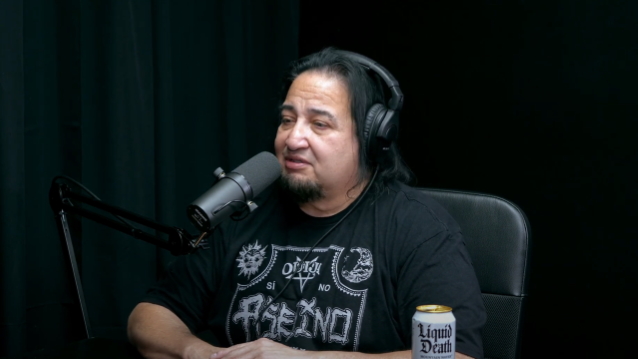 In a new interview with “The Garza Podcast”, hosted by SUICIDE SILENCE guitarist Chris Garza, FEAR FACTORY guitarist Dino Cazares opened up about his band’s search for a new vocalist following the departure of Burton C. Bell nearly two years ago.

“A lot of people are calling me out for not announcing our new singer,” Dino said (as transcribed by BLABBERMOUTH.NET). “[They’re saying] ‘What’s up? You were gonna announce a new singer? What happened?’ What I was gonna do is announce the new singer just before the STATIC-X tour [with FEAR FACTORY] that was supposed to happen right now. So I was gonna announce it, I was gonna release a track just before the tour, just to get some hype for the tour [and] introduce the person. But the tour got postponed, and I went on tour with SOULFLY [as a guest guitarist] and then all this other stuff.

“The thing is if I announce his name right now, everybody’s gonna attack — boom! They haven’t even heard him yet, and they’re gonna attack him,” Dino explained. “So I wanna do where I release a track. Everybody’s, like, ‘Release a track right now.’ Well, there’s planning involved. I don’t wanna put a song out just to put it out and nothing behind it. So, in other words, what I’m trying to say is what most fans don’t understand is you wanna create hype for something. In other words, just before a tour, I would release a song with the new singer, and people would get excited — boom! — you’ve got something to tour on. It would hopefully help generate more ticket sales, generate more interest for the band, blah blah blah blah. But if I release a track now, there’s nothing behind it and it’s just whatever. That’s what most fans don’t understand — there’s planning and there’s timing involved. So I’m withholding who this person is till the time is right… So that’s my thing that I’m saying to everybody right now, is that.”

When asked by Garza if the new FEAR FACTORY singer is “emotionally” ready to handle the inevitable pushback from some fans that he will get once his identity has been revealed, Dino said: “I think that they’re ready. When it comes to talent, they’re very ready. But ‘tour ready’ is completely different. Let’s hope that… Well, the person that we have has done some touring, but not touring like we do touring. Like, a full U.S. tour can be anywhere from four weeks to six weeks to whatever, then you fly over to Europe and do another four to five weeks, come back to the States, do another tour, then you go to South America and do another few weeks there, then you go to Australia and do another few weeks there, and then you plan for next year. I think one of the other things, too, is when this person is announced, they’re gonna have to be able to handle all the criticism. That’s gonna be the hard part. ‘Well, it didn’t sound like Burt.’ Well, of course not. I want this person… They do actually sound like Burt — they can handle all the old stuff like Burt — but as far as moving forward, I would like them to have their own identity. We’re still gonna have the formula of what makes FEAR FACTORY — for sure — but I want this person to somewhat have his own identity as well.”

Pressed about what happened to cause Burton to leave FEAR FACTORY, Dino said: “Good question. I don’t know. I think he just lost interest in… I can only assume, because we went through some really heavy lawsuits for four years, and it financially crippled us — personally as well — and I just believe that he lost interest. I think that possibly all the stuff that we went through in FEAR FACTORY was just, like… He’s one of those guys, ‘Fuck it. I’m out. I quit. Fuck it.’ He doesn’t come across as a fighter — as somebody who’s gonna be, like, ‘Fuck it. We went through it. Let’s go through it and let’s just continue.’ I mean, I left the door open for him for a while to come back into the band, but he pretty much said fuck me, Raymond [Herrera, former FEAR FACTORY drummer] and Christian [Olde Wolbers, former FEAR FACTORY bassist] — everybody. Fuck everybody.

“I’m not gonna push it,” Dino added. “I’m not gonna push him or nothing like that. Fans ask me all the time: ‘Hey, call him up. Just call him up.’ Well, if you saw the stuff he said when he left, he’s not exactly a phone call away… He left pretty bitter, and that’s pretty much where… It looks like he’s having a good time being free. So I’m not gonna force anybody to come back or [any] stuff like that.

Two months ago, former NIGHTRAGE singer Antony Hämäläinen, who recently unsuccessfully auditioned for the vocalist slot in FEAR FACTORY, claimed in an interview that the new FF frontman is “a person from Italy.” He also added that a female vocalist who is “in a band with somebody who’s a well-known producer/musician” auditioned for the position as well but didn’t get the gig.

Asked about his previous comment that he was open to hiring a female vocalist for FEAR FACTORY, Dino told Bucketlist TV: “That was true. I auditioned a few women, yes. But it didn’t work out — not because they were female or anything like that. Because I wanted to pick whoever was best for the position, and it turned out to be a guy.”

Dino also addressed his statement from last year that he wanted to give an “unknown guy a shot” at fronting FEAR FACTORY. He said: “Well, it wasn’t like I was only looking for somebody that nobody knew. I was looking for all different [types of singers]. Sure, if the guy turned out to be, or the girl turned out to be, someone that nobody knew and I gave ’em that shot, yeah, great. I was open to all of it, is what I’m saying. Male, female, whatever, known, unknown — I was open to all of that.”

In September 2020, Bell issued a statement officially announcing his departure from FEAR FACTORY, saying that he “cannot align” himself with someone whom he does not trust or respect.

Bell‘s exit from FEAR FACTORY came more than two weeks after Cazares launched a GoFundMe campaign to assist him with the production costs associated with the release of FEAR FACTORY‘s latest LP.

Bell later told Kerrang! magazine that his split with FEAR FACTORY was a long time coming. “It’s been on my mind for a while,” he said. “These lawsuits [over the rights to the FEAR FACTORY name] just drained me. The egos. The greed. Not just from bandmembers, but from the attorneys involved. I just lost my love for it.

In October 2020, Dino issued a statement in which he said that the door for Burton to come back to FEAR FACTORY wouldn’t “stay open forever.” The guitarist also revealed that Burton “lost his legal rights” to the FEAR FACTORY name “after a long court battle” with Herrera and Olde Wolbers. “I had the opportunity to do something right, and I felt that obtaining the name in full was the right thing to do for the both of us, so after nearly four years we can continue as FEAR FACTORY, to make more records and to tour,” he said. “That is why it is sad to hear that he decided to quit and, in my opinion, for whatever issues he has it seems like it could’ve been worked out.”

FEAR FACTORY‘s latest album, “Aggression Continuum”, was released in June 2021 via Nuclear Blast Records. The LP, which was recorded primarily in 2017, features Cazares and Bell alongside drummer Mike Heller.

Link to the source article – https://www.blabbermouth.net/news/dino-cazares-why-i-have-yet-to-reveal-identity-of-new-fear-factory-singer/

During an appearance on the latest episode of “The Jasta Show”, the video podcast hosted by HATEBREED frontman Jamey Jasta, FEAR FACTORY guitarist Dino Cazares…

August 26, 2022 During an appearance on the latest episode of the “Rock ‘N’ SeXXXy UnCensored With Amber Lynn” podcast, FEAR FACTORY guitarist Dino Cazares…

FEAR FACTORY will release the first song featuring the band’s new lead singer prior to the group’s North American tour with STATIC-X. The 37-date “Rise…

FEAR FACTORY guitarist Dino Cazares, who has yet to publicly reveal the identity of the band’s replacement for Burton C. Bell, spoke about the singer…

Former NIGHTRAGE singer Antony Hämäläinen, who recently unsuccessfully auditioned for the vocalist slot in FEAR FACTORY, claims that he knows the identity of the person…