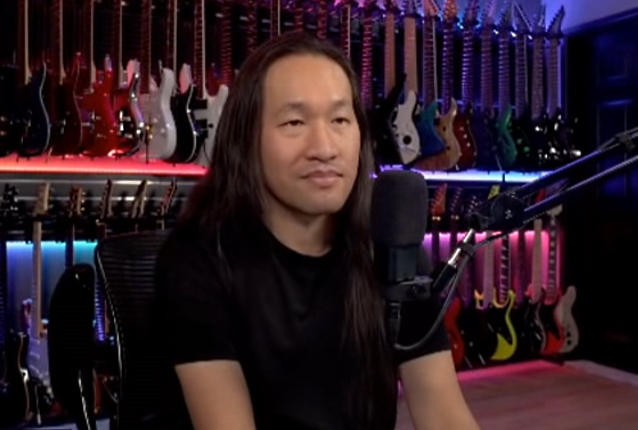 Last year, some of the world’s most legendary musicians teamed up with DRAGONFORCE‘s Herman Li in a bid to raise funds for guitar shred pioneer Jason Becker, who has been living with ALS for the past three decades.

Such high-profile guitarists as Steve Vai, Joe Satriani and Marty Friedman joined Li live on his Twitch channel for some impromptu jamming, with all proceeds going directly to help pay for Becker‘s medical expenses.

Becker — the composer, virtuoso musician, and former child guitar prodigy — has been suffering from ALS for more than 30 years, but that hasn’t stopped him from creating music. His latest album, “Triumphant Hearts”, was released in 2018, after Becker composed the music via computer using his eyes and enlisted heavy hitters like Satriani, Friedman, Joe Bonamassa, Uli Jon Roth, Neal Schon, Jeff Loomis and Paul Gilbert to play the parts.

In 2021, during a severe health scare, Becker‘s family, friends, and fans rallied together again to aid Becker, launching the #ShredForJasonBecker livestream fundraisers on Li‘s Twitch channel and a special Reverb storefront, where artists listed autographed guitars, merch and other rare items in support of Becker.

Li, who has been a fan of Becker since his youth, spoke about his fundraising efforts during a recent interview with Just Jen Reacts. He said (as transcribed by BLABBERMOUTH.NET): “For me, it was an honor, because… I have a crazy story about this whole thing. When I was, I think, 17, I read an article about Jason Becker having ALS, that he couldn’t move and play guitar anymore. And I even wrote to him on the Internet, via e-mail, when I was probably 19 or something, and he actually wrote back to me. And now, it comes all full circle that I’m able to help him and we raised — not just me, but along with the amazing musicians and the people out there, the fans — we were able to raise past six hundred thousand dollars.

He continued: “It’s an incredible thing, the community, the people out there — I’m talking about legends in the music industry for a long time all the way to the YouTube legends and the Twitch legends, we got everybody getting involved in this. So, I mean, I’ve gotta say I’m just one small piece of the puzzle that everyone together. But it was great.

“I was actually kind of shocked myself; I didn’t know I was able to do something like that,” Li admitted. “But it’s a crazy story — from a fan myself, growing up [and] listening to [his music], I’m able to do that for [Jason].”

Becker‘s story is one of brilliance, talent, determination, adversity, and, ultimately, triumph. A child prodigy on guitar, Jason rose to prominence as a teenager when he was one half of the technical guitar duo CACOPHONY, with his great friend Marty Friedman. In 1989, at only 19 years old and after wowing audiences all over the world, the young virtuoso became the guitarist for David Lee Roth, following in the huge footsteps of Eddie Van Halen and Steve Vai. He wrote and recorded on Roth‘s third solo album, “A Little Ain’t Enough”, and was poised for superstardom when a nagging pain in his leg was diagnosed as Motor Neurone Disease (MND), also known as Amyotrophic Lateral Sclerosis (ALS), or Lou Gehrig’s Disease, the same condition Stephen Hawking lived with for over five decades. It is a fatal condition with a life expectancy of maybe five years. Maybe.

That was more than 30 years ago. He lost the ability to play guitar, walk, talk, and breathe on his own. But never lost his will to live or his desire to create music. Communicating through a series of eye movements with a system developed by his father, Jason spells out words as well as musical notes and chords. He imparts his musical vision to his team who then can input the notes into a computer, edit the parts to his exacting standards, and then generate charts for session musicians. His inspiring music and life story have been the subject of countless news articles and magazine cover stories.

Link to the source article – https://www.blabbermouth.net/news/dragonforces-herman-li-it-was-an-honor-to-help-raise-more-than-600000-for-jason-becker/

Former MEGADETH guitarist Marty Friedman performed at the opening ceremony of this year’s Tokyo Marathon on Sunday, March 6. The Tokyo Marathon 2022, one of…

In celebration of his latest music video for the song “For A Friend”, former MEGADETH guitarist Marty Friedman recently answered some questions submitted by fans…

Joe Satriani revealed he has been in talks with Alex Van Halen and David Lee Roth about a potential Van Halen tribute tour. “I’ve been…

DRAGONFORCE guitarist Herman Li spoke to Finland’s Chaoszine about the progress of the songwriting sessions for the band’s next studio album. He said: “We’ve got…

MEGADETH‘s Dave Mustaine has once again praised the band’s current guitarist Kiko Loureiro, saying it him a “long” time to find someone who plays like…