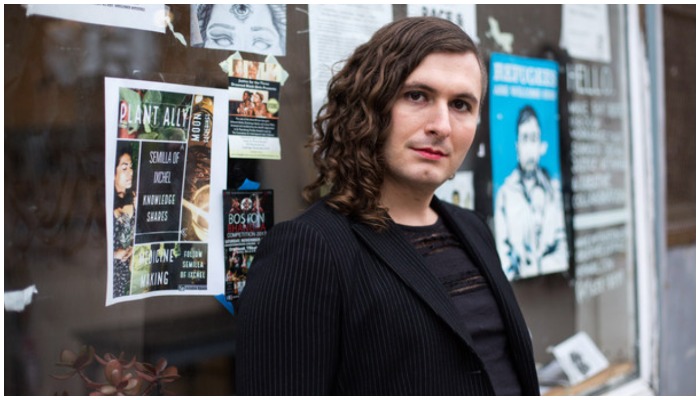 By day, Evan Greer is the deputy director of Fight For The Future, a nonprofit organization centered around the internet and civil rights. By night, she pours her phenomenal advocacy work into punk rock songwriting.

Greer, a Boston-based trans and genderqueer activist, has spent years on the road but arrived in the spotlight with the arrival of her 2019 record, she/her/they/them, exploring themes of queer liberation, transgender visibility and beyond. Her latest EP, Spotify Is Surveillance, is an extension of that, showing her passions and crafting a raw experience that will draw in listeners instantly.

In a time when trans rights are still being stripped back by bigoted legislation, and in an era where the internet grows increasingly more reminiscent of 1984, Greer is delivering exactly what the world needs: a guitar-laden wake-up call.

Her new EP, out now, features singles “Back Row” and “The Tyranny Of Either/Or,” as well as five other tracks, including a stunning take on a John Prine song. In an exclusive chat with Greer, she highlights how she crafted her music and visuals to go hand in hand with her advocacy and more.

You released the “Tyranny Of Either/Or” music video on International Transgender Day of Visibility. Your videos are quite thought-provoking. Did this video come together in similar ways to “Surveillance Capitalism”?

For “The Tyranny Of Either/Or,” I worked with Taina Asili and Gaetano Vaccaro, who are dear friends of mine. Taina produced my last record, she/her/they/them, and she runs an Afro-Latin rock revolutionary social justice band out of Albany, New York, and they do video work together. They’ve produced a series of really amazing music video documentaries highlighting the stories and work of women artists of color.

I decided at the last minute that I was going to throw together a video for that song and for Trans Day of Visibility. I decided, rather than make it a video [of] me looking pretty and playing guitar or a video of the lyrics, that if I was going to do it, I might as well use it as an opportunity to highlight and celebrate some of this history that’s so hidden from so many of us. I worked with Molly McGowan, who’s listed in the credits, and she helped with finding some of this archival footage and photos along [with] the storyline that I had put together. It was, in a way, still a nice, queer collective group effort to bring forth some of that history.

I think of myself as someone who’s a history buff. I really love learning about social movements of the past and having that inform my activism today. Every time I sit down to really look at the history of trans and queer resistance, I learn something new. And I realize just how much of these details are not in our history books and not taught to us. Even those of us who were pretty savvy and pretty in the know about these things. I learned a few new things just putting together this very brief history that only covers like five years between the Compton’s Cafeteria riot and Sylvia Rivera’s iconic speech at the Christopher Street Liberation Day Rally. It’s just a good reminder of how much is out there. It seemed, especially at this moment when, once again, trans people are in the crosshairs and legislation is being rammed through in states across the country, directly taking aim, especially at trans youth… Those moments and Sylvia Rivera’s speech that I sampled at the beginning of the song couldn’t possibly be more relevant today. She was lambasting the movement predominantly for ignoring the needs of trans youth and folks on the street and folks who were homeless. And those are the very same folks who are bearing the brunt of transphobia and systemic oppression today. It felt like it resonated because people really needed a song like that at this moment.

It’s honestly wild how much history goes untold. You are sharing this really important history, which is so necessary.

In a way, that points to one of the underlying points of the album, which is that the internet is actually awesome. The internet is the antidote to those history books in the sense that now. Any teenager in the U.S. can go on the internet and search for Sylvia Rivera and find out who she was and learn about her and learn about our history of militant trans and queer resistance and know that they are not alone. And that’s so powerful and so empowering. But then you juxtapose that against the fact that a very small handful of companies like Google, Spotify, Amazon [and] Facebook have employed this surveillance-based business model that is the antithesis of liberation, the antithesis of empowerment, the antithesis of creating a freer, more open, more democratized world. I feel like that’s the tension that I’m trying to capture with some of this work is recognizing that, on the whole, the ability for humans to talk to each other and access our universal collective amalgamation of knowledge and creativity is the best thing to ever happen. But if we don’t rein in this very small handful of companies that are trying to co-opt that with this parasitic business model, then we’re going to be heading toward a dystopia rather than a better world. I think we’re very much at a turning point right now, where the decisions that we make and the policies that we enact will determine what type of future our children and our children’s children will be living in.

The music industry is still dominated by cis white men, but it’s slowly shifting in a more diverse direction. Your labels Don Giovanni Records and Get Better Records are awesome with artists from different backgrounds. Can you tell us about your experience with them and how they’ve lifted up marginalized artists, as well as your own voice?

It’s really been a match made in heaven for me. I put out my last record on Don Giovanni Records, which was a huge honor. I love so many of the artists on Don Giovanni—Screaming Females to Waxahatchee and so many others. With this record, I felt so drawn toward continuing to work with Don Giovanni but also working with Get Better, just as an explicitly queer label. It gets a little ridiculous sometimes. People approach me, and often, I am the only trans woman, punk artist who they know other than Laura Jane Grace. And so, just being in this role and trying to make sure that I’m using my platform responsibly, I felt really drawn to working collaboratively with a label that’s run by other trans and queer and gender-nonconforming people. Their entire mission is lifting up our voices, and it’s just been so much fun. I’ve loved working with both labels. They’re both phenomenal. They both have just been enormously supportive of my work and taking a chance.

You can read the full interview in Alternative Press Issue 393, available here.

The post Evan Greer is here to share the queer history we never learned in school appeared first on Alternative Press.

Link to the source article – https://www.altpress.com/features/evan-greer-spotify-is-surveillance/

LGBTQIA+ artists have always been major players in the alt and punk scene. From Freddie Mercury and David Bowie to Halsey and Laura Jane Grace, rock…

Today, there’s nothing more inspiring than seeing musicians and other public figures using their platforms to support great causes. In the alternative scene, it’s fairly…

In the early days of April, Reade Wolcott entrusted with me something she has been keeping secret for years. “The number of people who know…

Kathleen Hanna led the charge of the riot grrrl movement and helmed pioneering bands, including Bikini Kill, Le Tigre and the Julie Ruin. Aside from…

MAN ON MAN, the project featuring FAITH NO MORE keyboardist Roddy Bottum and his boyfriend Joey Holman, will release its self-titled debut album on May…