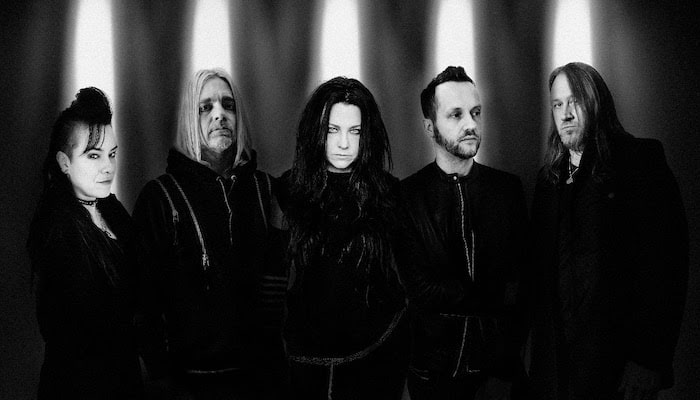 After nearly 10 years since Evanescence put out a collection of new work, their latest release The Bitter Truth has catapulted them back into the mainstream. Just weeks after the LP release, Evanescence joined The Kelly Clarkson Show to perform “Better Without You.” Led by vocalist Amy Lee, the group put on a larger-than-life, fiery performance.

“My next guests have been rocking it out for nearly two decades, earning two Grammys with their first album out of the gate,” Clarkson says in her introduction. “It’s been 10 years since they’ve put out a new album, but they spent their time during the pandemic digging in creatively, and the result is a new LP that’s certainly been worth the wait. Now performing ‘Better Without You’ from their new album, The Bitter Truth, give it up for Evanescence.”

Read more: 15 albums from 1995 that are a perfect gateway into the world of punk

You can watch Evanescence’s The Kelly Clarkson Show performance below.

After delivering several singles in waves beginning in 2020, leading up to the release of The Bitter Truth on March 26, 2021, Evanescence released the official video for “Better Without You” in April 2021. Evanescence’s performance on The Kelly Clarkson Show isn’t the group’s only talk show appearance in promotion of the album, though. Earlier this year, Evanescence appeared on the Jimmy Kimmel Live! to perform “Wasted On You.”

Evanescence’s performance of “Better Without You” isn’t the only news for fans to rejoice over. The band announced they are reuniting with Halestorm for a co-headlining arena tour in late fall 2021. In a safely filmed tour announcement video, Lee and Lzzy Hale expressed how excited they are to head out on the road and see fans again.

“We are so stoked to be going out on tour together again and want you all to see us,” Hale says.

Are you ready for some REAL LIVE music? We’ve all missed concerts for far too long, but the time has come and we’re back to perform a US arena tour this coming Fall with our friends in @Halestorm!! Fan pre-sale begins tomorrow at 10am local time. Passcode THEBITTERTRUTH21 pic.twitter.com/WPFNrH7WTA

Read more: Conquer Divide step out of their comfort zone with “Messy”—watch

Evanescence will embark on their first in-person tour with Halestorm beginning in November 2021, but they will also appear remotely for the Driven To Perform livestream concert on May 13 hosted by Alice Cooper.

We’ve partnered with @CooperTire for the Driven To Perform Concert on May 13 at 8 pm CT hosted by @alicecooper. Vote your favorite band & register for the show to be one of the first to hear us perform songs from our new album, “The Bitter Truth.” https://t.co/infsfCFcLw pic.twitter.com/mfFaXKdmvH

Lee and Hale have also appeared in several interviews together. Alternative Press recently spoke to In This Moment’s Maria Brink and the Pretty Reckless’ Taylor Momsen alongside Lee and Hale for a female empowerment round table. The full interview is featured in the debut Power Issue: Women Rising, available here.

Check out Evanescence’s upcoming tour dates and be sure to get tickets below.

Evanescence and Within Temptation 2022 tour dates:

The post Evanescence perform “Better Without You,” announce tour with Halestorm appeared first on Alternative Press.

Link to the source article – https://www.altpress.com/news/evanescence-better-without-you-performance-halestorm-2021-tour/

EVANESCENCE performed the song “Better Without You” on Monday’s (May 10) episode of the daytime talk program “The Kelly Clarkson Show”. You can now watch…

Evanescence have shared a music video for their song ‘Better Without You’, taken from their recently-released fifth album ‘The Bitter Truth’. The clip was directed…

EVANESCENCE has launched a music video for the latest single to be taken from the band’s Top 5 album “The Bitter Truth”. The clip for…

EVANESCENCE and HALESTORM are returning to the concert stage in the U.S. this fall. Produced by Live Nation, the tour will kick off Friday, November…

Evanescence are set to hold a new livestream concert that will be hosted by rock icon Alice Cooper. The band released their latest album ‘The…