EXODUS‘s Steve “Zetro” Souza talked to “The Zach Moonshine Show” about his band’s decision to postpone the North American leg of its “The Bay Strikes Back Tour” to 2022. The 30-date trek — also featuring TESTAMENT and DEATH ANGEL — was originally scheduled to kick off on October 6 at the Fremont Theater in San Luis Obispo, California and make stops in Austin, New York, and Detroit before concluding on November 27 at The Fox in Oakland.

Speaking about the thought process behind pushing back the tour, Zetro said (as transcribed by BLABBERMOUTH.NET): “They wanted us to test every night, and the bands didn’t wanna test every single night. ‘Cause the venues we were playing were not as big as say… MEGADETH just went around with LAMB OF GOD and TRIVIUM, and they did sheds, and HATEBREED — they played amphitheaters — and those are pretty big places where you can keep spread apart. We weren’t gonna have that luxury, and if Chuck Billy [TESTAMENT singer] gets sick three weeks after the tour starts, for whatever reason, the tour [is] over. So we felt it was better to let this thing play out just a little bit more. And the tour will start — same dates. If you bought a ticket, we will honor it at the dates. The same dates, the same venues, and this one starts April 9th. I mean, almost exactly the same route — every date starts… ‘Cause we would have been there now; we would have been doing it; we would almost have been through it right now — we would have been two weeks into it. I think it was a better decision for now. I just want safety for everybody; that’s all that matters.”

“The Bay Strikes Back Tour” dates have been rebooked beginning in April and will include additional cities not originally scheduled for the tour.

EXODUS will release its new album, “Persona Non Grata”, on November 19 via Nuclear Blast Records. The LP was recorded at a studio in Lake Almanor, California and was engineered by Steve Lagudi and EXODUS. It was produced by EXODUS and was mixed by Andy Sneap. For the third time in the band’s history, they returned to Swedish artist Pär Olofsson to create the album artwork.

“Persona Non Grata” is the follow-up to 2014’s “Blood In Blood Out”, which was the San Francisco Bay Area thrashers’ first release since the departure of the group’s lead singer of nine years, Rob Dukes, and the return of Souza, who previously fronted EXODUS from 1986 to 1993 and from 2002 to 2004.

In July, EXODUS drummer Tom Hunting underwent a successful total gastrectomy in his battle with squamous cell carcinoma (SCC) of the stomach. He rejoined his bandmates on stage on October 7 at the Aftershock festival in Sacramento, California.

EXODUS tapped John Tempesta to play drums for the band at Psycho Las Vegas in Las Vegas, Nevada in August and at Full Terror Assault in Cave In Rock, Illinois in September while Hunting was recovering from surgery. Tempesta was a member of EXODUS from 1989 until 1993 and played on the band’s albums “Impact Is Imminent” (1990) and “Force Of Habit” (1992). 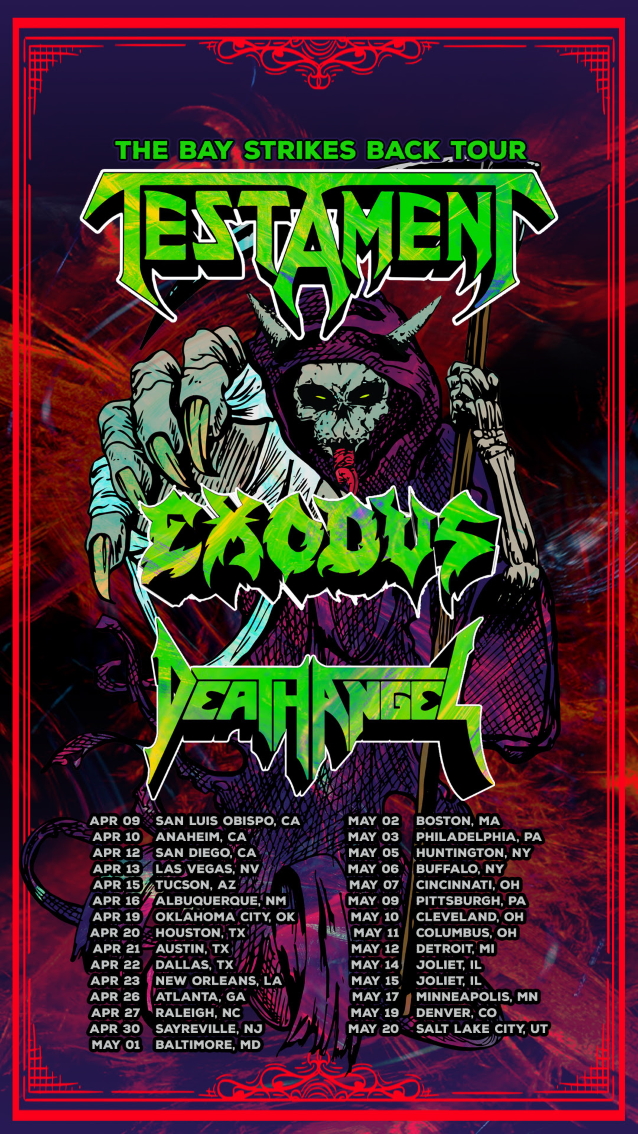 Link to the source article – https://www.blabbermouth.net/news/exodus-frontman-says-it-was-a-better-decision-for-now-to-postpone-the-bay-strikes-back-tour/

TESTAMENT, EXODUS and DEATH ANGEL played the sole 2021 date of “The Bay Strikes Back Tour” last November 27 at the Fox Theater in Oakland,…

Five new dates have been added to the rescheduled North American leg of “The Bay Strikes Back Tour” featuring TESTAMENT, EXODUS and DEATH ANGEL. Newly…

TESTAMENT, EXODUS and DEATH ANGEL played the sole 2021 date of “The Bay Strikes Back Tour” last night (Saturday, November 27) at the Fox Theater…

During an appearance on “Put Up Your Dukes”, the new podcast hosted by ex-EXODUS singer Rob Dukes, current EXODUS frontman Steve “Zetro” Souza was asked…