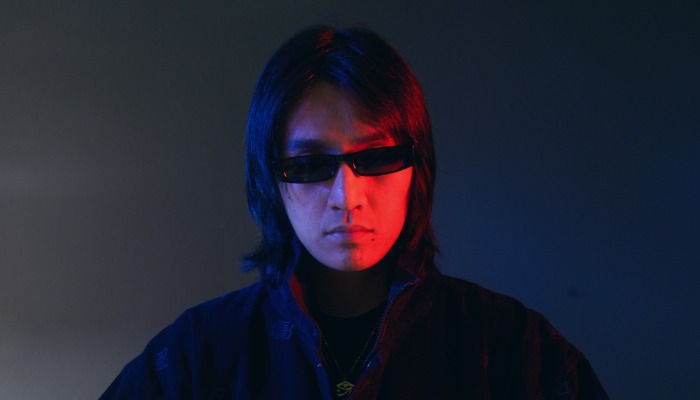 Eyedress has released his fifth and final single, “Chad An Gordy,” ahead of his upcoming album, Mulholland Drive. The latest track from the album, which is scheduled to drop Aug. 27 via Lex Records, features production and vocals by King Krule.

The track begins with melancholic, reverb-heavy bass. Then Eyedress’ ghostly vocals enter, threatening to hypnotize listeners if they aren’t careful. Suddenly, the instruments swell around him. Miscellaneous noises swarm, attempting to overpower his pacified voice and bury him in the chaos.

Read more: KennyHoopla and Eyedress are revolutionizing alternative as we know it

The frenzied video that accompanies the track follows Eyedress’ struggles after getting hit by a car, nearly killing him. He begins to fall apart, bones snapping as he loses his grip on reality. We then find out that the musician was the one driving the car that caused his own near-death experience, and he’s stuck in a surreal, endless time loop.

chad an gordy prod by king krule is out now big thanks to everyone that took part in this enjoy the video y’allhttps://t.co/8eYDNICTMI pic.twitter.com/1bBUtZf4vL

The release of “Chad An Gordy” follows the releases of “Prada” (feat. Triathalon), “Brain Dead,” “Something About You” (feat. Dent May) and “Spit On Your Grave.” It also perfectly coincides with Eyedress’ debut Alternative Press cover.

“I can’t wait for you all to hear my new album, Mulholland Drive,” Eyedress tells AltPress. “I tried to put something in there for everyone. Big thanks to everyone [who] helped me make this album in such a short amount of time and love to all the featured artists that decided to be a part of this album. It’s definitely going to be special having worked with people I really respect and look up to. The album has 15 songs and is not bound by one genre, as usual. I had to stick to code and give the fans that variety.”

Variety can also be seen in the lyrical themes of his songs, from the sweet “Something About You” to the antagonistic “Brain Dead.” And while Eyedress is unafraid to tackle darker themes in his music, he explained in a press release how the album will be positive overall.

“This album is about loving yourself and your life,” Eyedress says. “At this point in my life, all the people who support me have made my life better than I can imagine. I’m literally eating off of this, and I want to give back because there’s so much love.”

The project also features a wide range of collaborations with other artists. Beside the already released singles with Triathalon, May and King Krule, fans can look forward to hearing from DâM-FunK, Stones Throw producer Vex Ruffin, BEE EYES, Paul Cherry, Satchy and Elvia.

“It’s been fun to get to work with artists I’ve always wanted to work with,” Eyedress continues. “My goals have come full circle.”

Check out the music video below.

Eyedress will be performing at Riot Fest Sept. 17 alongside Meet Me @ The Altar, Smashing Pumpkins and Kississippi. Before that, he will make stops in Atlanta, Brooklyn and Los Angeles. You can buy tickets to see Eyedress live here.

The post Eyedress releases “Chad An Gordy” ahead of ‘Mulholland Drive’—watch appeared first on Alternative Press.

Link to the source article – https://www.altpress.com/news/eyedress-chad-an-gordy-music-video-mulholland-drive/

Eyedress has announced his fourth studio album, Mulholland Drive, will arrive Aug. 27 from Lex Records. The news comes with a glimpse of what’s to…

After more than a year devoid of live performances, with countless album and project delays, there’s no doubt that 2021 has delivered some exciting releases.…

Eyedress just released the cinematic music video for his song “Spit On Your Grave.” The “Jealous” singer takes on the persona of a swagger-filled vampire…

Eyedress has released a new two-song single that showcases both ends of Eyedress’ sonic capabilities. The single includes “Something About You,” featuring Los Angeles-based musician…

Eyedress has released his new album, Mulholland Drive. Alongside the new record, we bring you our cover story from issue 396. I met Eyedress (aka…