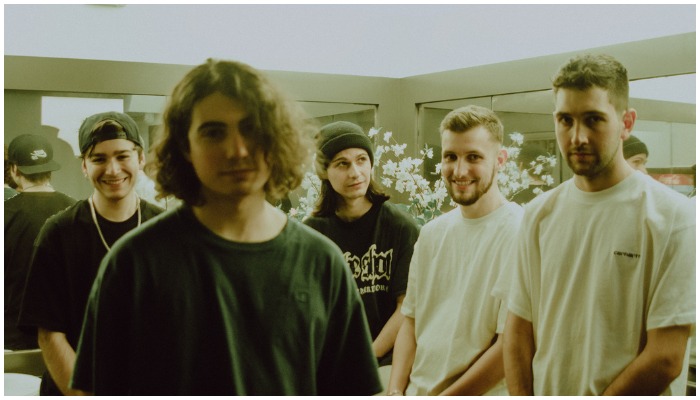 Only two EPs into their discography, Featherweight are already proving themselves as an act to be reckoned with. Mixing upbeat elements of pop punk with classic alt-rock, the quintet take listeners on a nostalgic trip to the ’90s. Inspired by bands such as the Story So Far and Turnover, the group implement heavier riffs for mosh-worthy anthems and head-banging moments.

Composed of vocalist Miguel Cervera, guitarist/producer Jorge Blanco, lead guitarist Juan Ruiz, bassist Carlos Sánchez and drummer Adrián Sáenz, the group released their first single in 2019 with “Promazine.” The single ended up on their debut EP, A Place Where My Mind Crumbles, which dropped later that year. Despite the trials that came with 2020, the five-piece proceeded to release a few singles over the course of the year until putting out their sophomore EP, Never Bloom.

With the coronavirus pandemic came a time of compromise for bands around the world. Studios were off-limits due to social distancing guidelines, but for acts such as Featherweight, adapting to the times was just another hurdle to jump in their journey. Hailing from Madrid, Spain, the pop-punk quintet managed to record the Never Bloom EP from the comfort of their homes.

Featherweight released A Place Where My Mind Crumbles in 2019 and put out the Never Bloom EP in December 2020. How have the band grown since the first release?

We have grown so much, both personally and musically, in between both releases. We had the chance to get to know each other better, to listen and discover new music… We also learned a lot and are still learning, working very hard and pouring everything we have into what we do. That’s how Never Bloom was born. There has been an amazing individual and group evolution, which is clearly shown on our new record.

Was the EP recorded during the pandemic? How did the band handle the trials that came with that, and was it more difficult to make than your previous EP due to the circumstances?

We composed the whole EP during the pandemic. Unfortunately, we were not allowed to leave our homes, and we would FaceTime almost every day. We understand each other really well when it comes to music, so we adjusted quickly to the circumstances. We would bring a few ideas every time we called each other and ended up coming up with the songs. We had to record ourselves with what we had and then share it with the others. The process was not difficult. We like to view it as a different way of keeping up with what we love: making music. As a band, we really like playing with new sounds, making and composing new stuff. We believe next time we will be able to find another way [to] come up with something different that we really like.

Your music is a combination of classic pop punk and rock but also has heavier aspects like in “Pretend.” Where does your sound come from? How did the band decide that this was the type of music you wanted to create? Were there any specific artists who you were inspired by?

“Pretend” hides a lot of rage itself, and that’s why we decided to try with a more punk and robust or heavy sound. We think we managed to transmit that feeling very well, both musically and lyrically. We absolutely love listening to many different songs from many different genres. That ends up with us making music we actually have the pleasure to enjoy listening to as well, which is full of emotions. Bands such as Turnover, Citizen, the Story So Far [and] Title Fight have helped us find our style. They represent a series of values we think are amazing as a band.

For Never Bloom, the band were able to collaborate with Bloom’s Jono Hawkey and Trash Boat’s Tobi Duncan. What was the experience of collaborating with other artists like? Who would you like to eventually work with in the future?

Working with both of them has been an experience we still can’t get over. We thought they were the perfect artists who could provide a new sound and style to both songs. Once we reached out to them and told them our idea, they connected with us immediately and understood what we wanted to do. They both were very involved, and that made things even easier, even being miles apart. Jono and Tobi are great musicians, and we are very proud of the outcome. As to future collaborations, we’d love to work with Boston Manor or girl in red.

Last year, you recorded a cover of Billie Eilish’s “everything i wanted.” What inspired you to make that particular cover? Do you think you’ll be releasing any more covers in the future?

Stepping out of our comfort zone is pretty important for us. That’s why we wanted to do something that had nothing to do with our style and combine it with sounds we liked. “everything i wanted” by Billie seemed like the perfect song, and we had lots of fun recording it and filming its video. As a band, we think the most enjoyable and nourishing thing we can do is create our own music to express ourselves through it. We love writing and composing, and that’s what we’re also into right now. Plus, we’re not closing any gates when it comes to new music. We never know what’s going to happen.

You recently played a sold-out show in Madrid. After a year without live music, what did that feel like? How did that set differ from your previous concerts?

Playing a show after more than a year and selling all the tickets in barely 10 days is still crazy to us. It was a really special performance, and we feel very lucky to be able to do what we love. We also have a very open and committed fanbase and friends. They were that way too even when everyone, them included, had to sit down, wear a mask and keep a safe distance. Gigs are our safe place. It’s where we can create that special connection between us, our music and all the people there. Every [set] we play feels different than the previous one. It’s hard not to see people jumping, crowdsurfing or stage diving, but it definitely was a different experience, which helped Featherweight bring the best of us. It ended up great. We were very happy, and we hope we can play another gig very soon.

The band are only a few years old. Where do you hope to be in the next few years?

Up until now, we’ve had the chance to live amazing experiences, which we’ve enjoyed a lot. Hopefully, we can keep on growing and enjoy that part of the process. We’re sure it’ll also help us grow as musicians and as individuals.

The post Featherweight pulled from a myriad of genres for their ‘Never Bloom’ EP appeared first on Alternative Press.

Link to the source article – https://www.altpress.com/features/featherweight-never-bloom-ap-recs/

Former Yuck frontman Max Bloom has announced a new solo album called ‘Pedestrian’. It comes after the indie group announced in February that they were splitting…

Ashland are returning to their roots with their first release since Over The Moon. With their new EP I, the duo deliver pop synths backed by…

Yotam Ben Horin is feeling pretty pensive these days. He’s back in the U.S. to record an intimate solo record, and in a couple of…