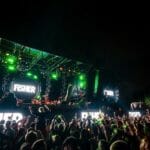 The man, the myth, the modern day tech-house legend, FISHER is back with another massive single, adding to his already impressive resume. “It’s a Killa” featuring Shermanology, out now via Catch and Release Records, and it also happens to be FISHER’s first collaboration in his small but loud discography.

Tapping into uncharted territory by blending a classic underground tech-house sound with electric bass-thumping drums, FISHER and Shermanology have produced a tune locked and loaded for main stage pyrotechnics. Dancing Astronaut first recognized “It’s a Killa” in ID form back in October of 2021, when Chris Lake premiered the tune at his weekend one Austin City Limits set. Although the song has been tweaked since its debut, “It’s a Killa” maintains the same elements and energy that made the ID as hotly anticipated as it was. Watch the video below for arguably the best crowd reaction of the 2021 festival circuit.

For the second year in a row, Lake and FISHER will play back-to-back nights of Under Construction shows over the 2022 Memorial Day weekend. Taking place in Arizona, the lineup enlists support from Miane, Hot Since 82, Dancing Astronaut Artist to Watch in 2022 Cloonee, and more. In 2021, FISHER and Lake’s Under Construction Arizona show was the first no-restrictions dance music event on the West Coast, drawing in more than 20,000 attendees across its two days of operation. The duo opened the performance with “A Drug From God” for the very first time, which ranked one of our Top Tracks of 2021. Although the pre-sale for the 2022 Under Construction series has already sold out, general on-sale tickets are still available here.

The post FISHER’s got a new single with Shermanology—and ‘It’s a Killa’ appeared first on Dancing Astronaut.

Link to the source article – https://dancingastronaut.com/2022/03/fishers-got-a-new-single-with-shermanology-and-its-a-killa/

Shermanology introduces a new edit of banger ‘It’s A Killa’. The brother and sister duo release an original edit of the unmissable track with production…

The hope was that “A Drug From God” wouldn’t make it onto Dancing Astronaut‘s most-anticipated IDs of 2022 list, and Chris Lake and Grimes—who goes…

by: Alex Lambeau Aug 31, 2022 One of the latest artists to embark on his own record label has been Cloonee. At the end of…

Words by Melisa Yuriar (@mildcob) Cast your fishing poles into the tech-house pond and get ready to rave: Aussie producer FISHER has a new tune.…

by: Alex Lambeau Sep 6, 2022 Back with another mesmerizing tech-house single, FISHER has unveiled “Yeah The Girls.” Easily his most anticipated single from a…