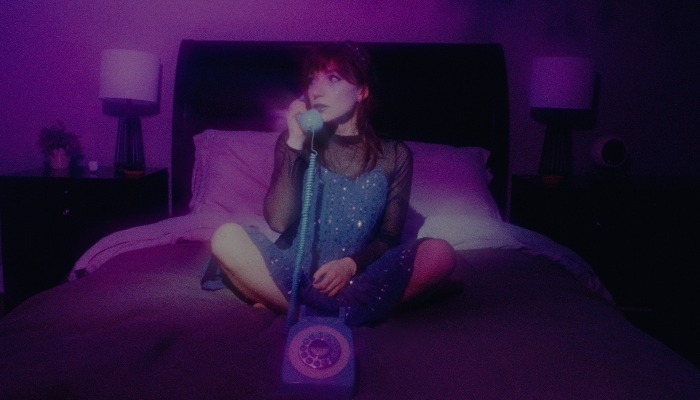 Flower Face has released a new video for her latest single, “Cornflower Blue.“ The single comes from her upcoming full-length, which drops in 2022 via Nettwerk Records.

Flower Face is the solo project of 23-year-old Windsor, Ontario native Ruby Mckinnon. As a multi-instrumentalist, producer, visual artist and video director, Mckinnon has crafted an impressive body of work in her relatively short career, self-producing a large portion of her own music and videos. She carefully crafts a unique world behind the art that she creates.

Read more: LILHUDDY and Joel Madden on new-era pop punk and owning who you are

As a songwriter, Mckinnon speaks her truth, writing songs that tackle heavy subjects surrounding mortality, loss, heartbreak and her well-documented battle with stage 3 ovarian cancer when she was only 17 years old. Mckinnon admits candidly in a press release that her “close brush with the grim reaper” led her to dive into music full time and create compelling art rooted in honesty.

“‘Cornflower Blue’ is about loving, or being loved, to the point of exhaustion; when it becomes a consuming obsession rather than a pure, comfortable love,” Mckinnon says. This sentiment rings true in the track’s lyrics and sonic landscape, with Mckinnon lamenting on a past love through her signature reverb-soaked vocals. The song also builds tension through rising crescendos that show both her use of artistic restraint and her ability to create cinematic climaxes, something that Mckinnon admits is entirely intentional.

The music video for “Cornflower Blue” sees Mckinnon amid purple and blue lens flares and VHS footage as she sings passionately into an old payphone at night, creating a lonely and melancholic atmosphere throughout its three-minute runtime. Additionally, flashbacks of a previous relationship and loving embraces play out, which feel heartbreakingly relatable and nostalgic at every turn. For the creation of this music video, Mckinnon enlisted outside help for the first time from director Mathew Pimental. The result is a visual that is breathtaking and aesthetically intertwined with the song’s overall mood.

We sat down with Mckinnon to discuss her early days discovering music, what her creative process is like, her past battle with stage 3 cancer and much more. Read our interview and watch the video below.

Your upcoming record will be your first release on Nettwerk Records. How did that relationship come together?

It’s going to be my first release on a record label in general. I’ve had some offers and negotiations in the past with smaller labels, but I’ve always done things independently, and nothing had ever come along where it felt worth it to give up my independent work. However, when I connected with Nettwerk, we were instantly on the same page and tuned into the same path that I want to follow. They understand what I am about as an artist, and I knew from the beginning that they were the right people to trust with my music.

Sonically, what can we expect from your upcoming record, and how has your sound evolved over the years?

I think that my entire career of making music, dating back to when I was 14 creating music on GarageBand, has always been about chasing a cinematic sound. I know that I have always fallen into the category of bedroom pop previously because of the resources of what I was able to make at the time, but now as I am making more connections and getting these amazing opportunities, I am getting closer and closer to achieving that cinematic sound.

I’ve had the opportunity to have real string players on my new record and have been able to work in a big studio with a whole team this time as opposed to just being myself. I’m constantly pursuing this big, dramatic and cinematic sound, and that’s coming into play on this record. This new record is a step forward.

How important is it that you can have full creative control over every aspect of your project, down to the vision — sonically, aesthetically and visually?

It’s pretty important. That’s always been my biggest struggle as I evolve as an artist. I’m a bit of a control freak in the studio and artistically. It is sometimes hard for me to give up creative control, but I do find it really important to maintain my vision and personal authentic self and what I am portraying to the world. I’m a very meticulous person, especially when it comes to creating demos. I will often demo on my laptop down to the last note, with 40 layers of instruments, and do all of my vocal production because I know exactly what I want it to sound like. For “Cornflower Blue,” the studio version is almost identical to the demo version.

What can you tell me about the process behind creating the music video for “Cornflower Blue”?

I have always done my past videos on my own, but this time, I connected with a filmmaker from Detroit named Mathew Pimental on Instagram and brought him in to direct the video. I had this whole video in my head when I was recording the song. When I saw Matthew’s film reel and connected with him, it was like the stars aligned with how in sync we were. We started throwing ideas back and forth, brainstorming, and the idea really evolved, but then the border closed due to the COVID- 19 pandemic.

Finally, I was able to fly across the border to the U.S. to film the video. It was a really collaborative effort, but Matthew brought so much to the table. We are actually shooting another video together soon. This video is an example of a time where I let go of a bit of creative control, and it turned out well. [Laughs.]

Do you feel at all like your sound has been influenced by the Canadian music scene?

I know that there is a very Canadian sound, and I don’t feel like I necessarily have that, but being from Canada is obviously very different in terms of entering the music scene than being in the U.S. Often, I’m frustrated thinking it would be easier if I was from New York, but then again, the access to artist grants here in Canada are crazy, and I wouldn’t have been able to do what I have done these past couple years without that financial support. Aside from people making fun of my accent sometimes, I don’t feel like I have a Canadian sound. [Laughs.]

What were some of the early influences that inspired you when you first began writing music?

My first favorite band was the White Stripes. My dad was a radio producer since he was 18, so he always introduced me to music the moment that the songs would be released. I was getting a lot of influences from him. When I became an 11-year-old angsty person, I started listening to a lot of old AP bands. [Laughs.] However, everything changed when I discovered Bright Eyes. I think my influences are all over the place.

I get compared to Mazzy Star a lot, and I do love them, but I feel like my sound is an amalgamation of all these random, different things that I like. There are still influences from my childhood that I love like Breaking Benjamin and Three Days Grace. I feel like those bands and the songs they created are no different than the current indie bands making vulnerable, confessional, emo songs, but for some reason, only the indie bands are looked at as high art. They’re all expressing the same kind of things, right? Just in different levels of melodrama. I guess I’m drawing influences from all of those different things, all at once.

What would be your dream tour and collaboration?

I would love to open up for the National. I have this fantasy of their singer Matt Berninger bringing me onstage to perform “Pink Rabbits.”

You have persevered through many trials and tribulations, starting with your cancer diagnosis at age 17, and emerged from that difficult period with a newfound passion for your art and life. What would be your advice to those who may be struggling with a serious illness, and how has it informed your music?

My advice is to advocate for yourself, and don’t accept no. As a young woman going through what I went through, I am still dealing with people dismissing my concerns and not taking me seriously, so advocate for yourself. I guess my close encounter with the grim reaper just taught me that it’s stupid to not pursue something that you want to pursue.

On a personal level, I wanted to be able to tell my story and not just the cancer thing; that’s just a book on the shelf. I wanted to tell my entire story because when I was sick, everyone knew because I was in high school. In school, everyone knows everything. It was like the topic of staff meetings and assemblies. I was so out of it — I was on a million different drugs and doing chemo treatments, had major surgery and was just not in my right mind. I didn’t think about how that part of it was going to affect me until much later when I started going into the world and meeting people who I didn’t go to high school with. [I] realized that every time I met someone, I thought they knew everything about me.

I felt like I didn’t have a chance to introduce myself. I didn’t have a chance to tell anyone who I was or any part of my life, regardless of whether it had to do with the illness or not. It became important to me that I’m able to tell whatever part of my story, important or small, with my own words to people who are willing to listen. The way that my audience has grown is so exciting for me because I feel like now I can do that. I have the chance to do that. People are now telling me their stories, too, and it’s just a great kind of sharing thing. That’s my favorite part of what I’m doing.

Link to the source article – https://www.altpress.com/features/flower-face-cornflower-blue-release-interview/

Here at Music Feeds, we’re eager to introduce you to the incredibly talented artists whose music fills our speakers every day. Enter For Fans Of: a snack-sized…

Zoë Kravitz kicked off the latest Saturday Night Live episode with a vibrant cat-themed monologue. “I currently have a new movie out called The Batman,”…

Ariana DeBose brought a little taste of West Side Story to Saturday Night Live. The Golden Globe-winning actress, who stars as Anita in Steven Spielberg’s…

Wonho has unveiled a teaser for the forthcoming music video of his new single, ‘Eye On You’. READ MORE: BIBI: “I have a long-ass plan…