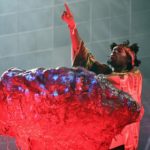 Flying Lotus has shared the official soundtrack to his Netflix anime series Yasuke in full. The new LaKeith Stanfield vehicle follows the story of the first African to become a non-Japanese samurai, not only scored, but also executive produced by Flying Lotus. The Brainfeeder head honcho put together 26 new tracks for the animated feature’s first season, inviting frequent collaborator Thundercat, Denzel Curry, and Niki Randa to contribute to the tracklist.

Yasuke premiered on Netflix on April 29, just days after the You’re Dead! producer teased the show’s intro and outro tracks during the opening and closing credits. Now, the full tracklist is upon us, rounding out at 44 minutes in total. In a recent interview with Vulture, FlyLo expressed feelings of familiarity with his protagonist, identifying with the character’s outsider nature, and honing in on that feeling to help develop both the show’s storyline, as well as the accompanying sonics. Says FlyLo,

“Being a Black man whenever I go to Japan, it was really easy to get the story. I knew exactly what it felt like. They say, ‘write what you know.’ I was able to help shape Yasuke’s present-day narrative in the story based on my friends and the things that I was feeling.

Listen to Flying Lotus’ new Yasuke soundtrack in full below.

Link to the source article – https://dancingastronaut.com/2021/05/flying-lotus-shares-full-26-track-yasuke-soundtrack-featuring-thundercat-denzel-curry-and-more/

Logic and Madlib have joined forces to form a new duo called MadGic – listen to their first track below. READ MORE: Logic – ‘No…

Noel Gallagher’s High Flying Birds unveiled a new single today, “We’re On Our Way Now,” which the always quotable songwriter dubbed as “a taste of…