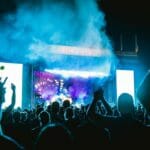 From May 27 – 29, Forecastle Festival will take over Louisville, Kentucky to commemorate 20 years of programming with a cross-genre lineup featuring an eclectic array of acts, including Tame Impala, Jack Harlow, RÜFÜS DU SOL, Porter Robinson, and Tyler, The Creator. The electronic genre is well-represented on Forecastle’s 2022 roster of talent, with additions such as Alison Wonderland, Dr. Fresch, and TroyBoi indicating that Robinson is just the tip of the dance iceberg.

Curative expertise should be expected of an event that’s been in operation for two decades, and come May, festival organizers are prepared to celebrate Forecastle’s growth accordingly—and with a special focus on the hip-hop and electronic genres, not to mention ascendant artists. These three components, which have been Forecastle’s bread and butter over the years, will be a prominent part of the event’s 20th-anniversary celebration, says Ted Heinig, President of AC Entertainment:

“Forecastle Festival launched in 2002 and we’re celebrating 20 years of being a great Kentucky tradition. Each year we’ve seen incredible growth and progressively and intentionally evolved the artist programming. Hip-hop, electronic and emerging artists have always played a big role in the festival, but this year those genres really take center stage as we explore the genres more in depth. “

With a lineup as varied and as expansive as Forecastle’s, it would be natural for attendees to need some direction. They’ll find it in Dancing Astronaut‘s account of three acts that warrant special attention at the 2022 event. For the readers who are hoping to dive into the less widely known series of performers present at Forecastle, but unsure of where to start, just sit back and relax—we’ve got you covered.

Hailing from Denver, Colorado, Maddy O’Neal marries her rock ‘n’ roll roots and love of hip-hop with her passion for crafting soul-bending dance music productions. The up-and-coming producer has already covered considerable ground in the industry, touring as support for CloZee, Big Gigantic, Pretty Lights, Cherub, and more mammoth talents, in addition to performing at Electric Forest, Camp Bisco, and Red Rocks Amphitheater, to name just a few. Collaborating with the master of psychedelic sonics herself, CloZee, in 2021 for “Zest Please,” which has amassed more than 1 million streams in the time since, O’Neal is primed for a huge year, and will surely be supplying Forecastle with a diverse-yet-fluid set. Stream one of her top tracks, “After Glow,” below.

Pulling Influence from Flying Lotus and J. Dilla, as well as vintage funk and disco, producer and beatboxer Flamingosis captures smooth, soulful energy that makes for an exhilarating live set. Laying claim to 500,000-plus monthly listeners on Spotify alone, the New Jersey native has been pushing boundaries in the scene for nearly a decade, and recently bestowed brand new music upon fans, his 2021 album, Daymaker. Slip into a world of flow and rejuvenating beats with Flamingosis’ “Sunset Park”

Welcoming fans to her own “twisted reality,” Lucille Croft finds a space for bass within Forecastle’s epic lineup, dubbing seductive vocals over menacing basslines and pulsating ambiance. Engaging listeners in dark, playful expressions of her sound, Croft brings something different to the table. Featured on Dancing Astronaut’s 5 Under 15K Vol. 27 back in 2019, the sensual purveyor has been climbing the ranks as expected, making for an enticing listening experience and an even more elusive live show. Don’t miss her 2020 track “Control,” which boasts more than 5 million streams so far⁠—check it out below.

The post Forecastle Festival touts a can’t-miss lineup of up-and-comers for the 20th anniversary appeared first on Dancing Astronaut.

Link to the source article – https://dancingastronaut.com/2022/03/forecastle-festival-touts-a-cant-miss-lineup-of-up-and-comers-for-the-20th-anniversary/

Louisville Ky.’s longest-running music festival, The Forecastle Festival shared who will be returning to its grounds at the Waterfront Park on May 27 through 29…

Forecastle Festival is breaking ground with a jaw-dropping lineup slated for May 27 – 29 of 2022. Located in Louisville, Kentucky’s Waterfront Park, the long-running…

New Orleans’ BUKU Music + Arts Project makes its triumphant return after a two-year hiatus on March 25 and 26 of 2022. A self proclaimed…