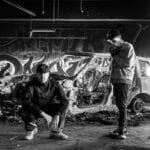 Returning with yet another reverberating breakbeat voyage, G Jones and Eprom have just released their latest, “A2C2ID” from the roll out of their upcoming EP, Acid Disk 2.

Be sure to catch G Jones on his North American tour with support from Mr. Carmack, Shades, Ivy Lab, Redrum, and Jon Casey. Meanwhile, Eprom will play at festivals like Lightning in a Bottle, Digital Garden, and The Untz this spring as well as Red Rocks Amphitheater in support of Flume for his long-awaited world tour announced earlier this year.

Stream the latest from Acid Disk 2 below.

The post G Jones and Eprom align on second outing ahead of joint EP, ‘A2C2I2D’ appeared first on Dancing Astronaut.

Link to the source article – https://dancingastronaut.com/2022/03/g-jones-and-eprom-align-on-second-outing-ahead-of-joint-ep-a2c2i2d/

Words by Melisa Yuriar (@mildcob) Acid meets breakbeat on G Jones and Eprom’s latest collaborative cut, “On My Mind,” out now via Illusory Records. “On…

by: Alex Lambeau Aug 31, 2022 G Jones palette has always been colored with unique sounds that exist far outside the box in bass, and…

Today Do LaB, originators and creators of the boutique festival experience Lightning in a Bottle, have revealed the lineup for the event’s 2022 return to…

Burgeoning electronic producer Francis VI has exemplified great promise during his formative years in the dance music space. With both official remixes and original cuts…