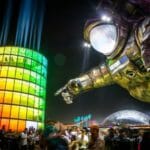 Coachella and its beloved 642-plus acre home at Empire Polo Club in Indio, California are now inseparable—least until 2050. For more than two decades, Coachella and Stagecoach have attracted herds of music lovers to the desert oasis in Southern CA, generating north of 3 million dollars for the city of Indio annually. Thanks to a recently signed long-term lease, Goldenvoice‘s development agreement in Indio will hold from the year 2030 through 2050.

The contract also grants Goldenvoice year-round oversight of operations at the festival site, allowing the promoting giant to host two additional three-day music festivals on the grounds per year (this is your cue to recall the success of 2016’s Desert Trip featuring Paul McCartney and The Rolling Stones). In a recent statement, Empire Polo Club owner Alexander Haagen III said,

“We are pleased to continue our long-term relationship with Paul Tollett and Goldenvoice. The new long-term lease will assure that the iconic Coachella and Stagecoach Music Festivals will continue for many years to come.”

Goldenvoice president Paul Tollett remarked, “Goldenvoice has had a unique relationship with Empire Polo Club for over twenty-five years. It is a privilege to now take over the operations of the venue and we look forward to continuing to build upon the special history that has been established there. It’s immeasurable how much we’ve learned from Al Haagen.”

After what will have been two consecutive years of postponement, both Coachella and Stagecoach will be back on track starting next April. Coachella 2022’s headlining acts will include Travis Scott, Rage Against The Machine, and most recently announced, Swedish House Mafia.

Link to the source article – https://dancingastronaut.com/2021/10/goldenvoice-inks-new-lease-to-keep-coachella-in-indio-through-2050/

In October of 2021, Coachella amended its “Health & Safety” policies for 2022, changing the official language to require a “negative COVID-19 test taken within…

After weeks and months (perhaps even longer?) of speculation, this year’s Coachella lineup has finally arrived. Over the past few weeks, information trickled out that…

Siding with the organizers of the Coachella music festival, a federal judge issued a restraining order Monday prohibiting Live Nation from selling tickets to a…