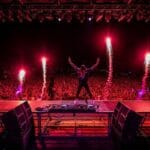 Gryffin and Jason Ross had always seemed like a match made in melodic heaven, but the idea didn’t start to actually come to fruition until this past May when Gryffin unexpectedly shared a quick five-second clip of the two wrapping up what they deemed a “banger.” It wouldn’t be until Insomniac’s first-ever Lost In Dreams festival on Labor Day Weekend that they’d appear on stage together to finally let everyone experience what they’d been working on. Just shy of two months later, Gryffin and Jason Ross are formally equipped to let “After You” into the release wild, signaling their long-awaited merger alongside Calle Lehmann for delivery.

The timing of “After You” truly couldn’t have been any better considering both Gryffin and Jason Ross had the chance to fully introduce it to the masses at EDC Las Vegas just a few days prior to its arrival, with the two joining on stage once more during the former’s set. Gryffin, Ross, and Lehmann had already unofficially met once before on Ross’ “All You Need To Know” rework, and “After You” firmly cements their conceptualized synergy, putting forth a seamless hybrid between Gryffin’s guitar-driven magic and Jason Ross’ melodic-bass mastery, with Lehmann topping the single off with a set of moving vocals that have that instant-classic feel to it, leaving no wonder as to why those in attendance at the Las Vegas Motor Speedway already knew the lyrics by heart before release day.

Gryffin explained how “After You” turned from a mid-pandemic idea into a collaboration with Jason Ross and Calle Lehmann, stating,

“‘After You’ started as an idea tossed around at the end of a long Zoom writing session. The hook immediately captivated me, and I had Calle send me his vocals right away. Jason and I were also looking to work together, and I sent him the idea and he loved it. Over the next several months, we passed the record back and forth, working in LA and virtually with Calle in Sweden to get it as perfect as possible. We’re so thrilled to share this record with you all.”

The post Gryffin and Jason Ross seamlessly collide with Calle Lehman on the ultimate post-EDC boost, ‘After You’ appeared first on Dancing Astronaut.

Link to the source article – https://dancingastronaut.com/2021/10/gryffin-and-jason-ross-seamlessly-collide-with-calle-lehman-on-the-ultimate-post-edc-boost-after-you/

by: Ross Goldenberg May 6, 2022 The Gravity successor is officially locked in for 2022. There’s no exact timetable for Gryffin‘s sophomore album just yet…

by: Zach Salafia Apr 1, 2022 Gryffin has been mysteriously quiet in 2022. Just after his performance at EDC in October of 2021, he released…

EDC Las Vegas had its fair share of memorable sets throughout all three days of its 25th anniversary, but one set that stood above most…

by: Ross Goldenberg May 16, 2022 No one was expecting back-to-back Fridays with new Gryffin music. Exactly a week after publicizing that Alive was the…

by: Ross Goldenberg Jul 1, 2022 Gryffin welcomed his live show back on the first night of Bonnaroo‘s 2022 edition, and those tuned into the…