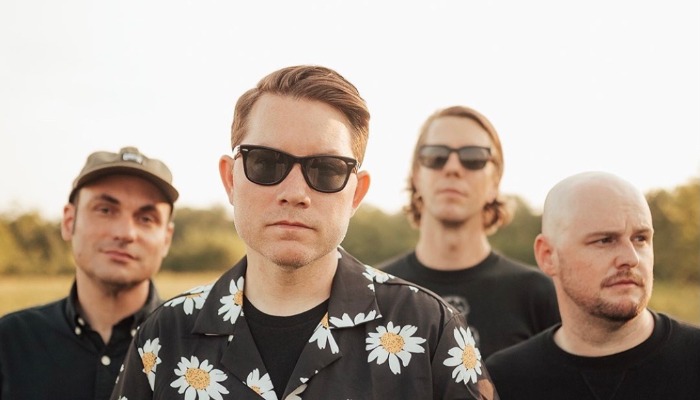 Hawthorne Heights have released their eighth full-length, The Rain Just Follows Me, via Pure Noise Records. The project was produced by Grammy-winner Cameron Webb (Alkaline Trio, NOFX, Megadeth) and tackles what it’s like for singer/guitarist JT Woodruff to be in Hawthorne Heights for over a decade, both physically and emotionally distanced from his wife and daughter.

Hawthorne Heights created the album while on tour, working between sound checks and rehearsals to produce the project.

“The most unbelievable part of this story is that this entire album was written and recorded before the pandemic,” Woodruff says. “All of this darkness and turmoil is basically a summation of the coldest and loneliest nights I’ve tried to reconcile for the past 17 years.”

Despite the dark themes of the album, the overall goal of the record is to project positivity to Hawthorne Heights fans.

“We want to create the best songs that are accurate depictions of our lives and connect to other people through [them],” Woodruff continues. “I hope this record helps people understand that others out there are thinking like them—and thinking about them. Everyone gets poured on in life. We just want to provide an umbrella.”

Limited-edition vinyl variants of The Rain Just Follows Me will be released in stores Oct. 22.

Read more: Hawthorne Heights have some advice for Kanye’s plan to sue his label

Woodruff spoke about the vulnerable meaning behind the album title in a press release.

“I really wanted to name this album after those lyrics,” Woodruff says. “It perfectly described what I’ve been going through. During the day, everything seems totally fine, but when I lay down and turn out the lights, my world comes crashing down. If this happens on tour or at home, I usually just think of the coast. I think of the way I feel, watching pelicans on the pier.

“And usually everything will stabilize, but for some reason, nothing was working,” he continues. “When you’re gone for months out of the year, it starts to feel normal. Your entire family and circle of friends have to rearrange their lives to stay connected to yours. And as much as this seems like a woe-is-me, touring-band sob story, it really isn’t about that at all. It’s about how our society has taught us to work ourselves to exhaustion, and at the end of the day, our prize is an early grave.”

Woodruff also talked about the physical toll touring took on him and how it affected his songwriting.

“I developed nightly panic attacks,” Woodruff says. “It was just exhaustion—from running out of gas and breaking down on the side of highways, from never being able to get the smell of diesel fuel out of your head. It was the first time in our career [where] I had no vision of a record. That scared the hell out of me.”

Not only did Woodruff reflect on his own life through the creation of this album, but he mused over what Hawthorne Heights—made up of Woodruff (vocals, guitar), Mark McMillon (guitar, vocals), Matt Ridenour (bass, vocals) and Chris Popadak (drums)—are as a band after almost two decades.

“Are we a heavy band with melodic vocals, or are we a pop-punk band with screaming?” Woodruff says. “What we realized was we were separating the songs more than we realized. On one side, we had killer pop-punk songs. On the other, there were super-heavy songs. At its core, Hawthorne Heights is both of those things put together.”

Listen to The Rain Just Follows Me and let us know your thoughts in the comments below.

The Rain Just Follows Me tracklisting:

Link to the source article – https://www.altpress.com/news/hawthorne-heights-the-rain-just-follows-me-release/

The title track from their new album Hawthorne Heights have given fans another taste of their upcoming new album, ‘The Rain Just Follows Me’.  Check…

HAWTHORNE HEIGHTS have announced their eighth full-length album, “The Rain Just Follows Me”, which will be released digitally on September 10, 2021 via Pure Noise…

Hawthorne Heights have announced that their eighth full-length, The Rain Just Follows Me, will arrive Sept. 10 via Pure Noise Records. Ahead of the release,…