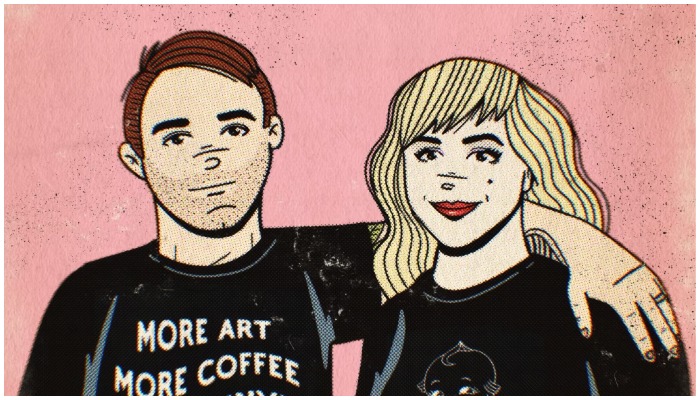 Don’t be fooled: HE Creative are doing exactly what you think they’re doing when you glance over their Instagram feed for the first time—creating a normalized space for punk rock, female empowerment, diversity and more.

Designed in various shades of muted hues, HE Creative are using their creative design studio as a means to elevate the voices of the alternative community, whether that be musicians, actors or otherwise, in a unique way. Additionally, they’re continuing conversations revolving around Black artists’ and women’s influence on punk rock. Apart from their eye-catching, retro designs, HE Creative have also immersed themselves into collaborative work with various musicians, including Toby Morse of H2O, Kanye West and Jessicka Addams of Jack Off Jill.

Read more: WILLOW talks about her influences, working with Avril Lavigne and more

One-half of the creative pair, Phil Howell, joined Alternative Press to discuss the studio’s ethos, their mission in the alternative community and how HE Creative restructured from corporate creation to their own self-expression through illustration.

I noticed pretty early on that you either know Toby [Morse] or you know H2O pretty well. But when I saw that you were messing with Toby and Rancid, I was like, “This is amazing.” So you were doing corporate-y type stuff, and then the stuff you were doing for fun took over and became more of your focus?

We were doing corporate stuff, and then we had a spell of really shitty clients. The work was soul-destroying. I had a mental breakdown and went full, “Fuck it, I’m going to start posting stuff on Instagram that I want to post.” We were watching a lot of the CW Riverdale show, so I did a mashup of Betty and the Misfits logo. And it started to blow up.

I noticed a lot of your point of view. It’s women. It’s LGBTQIA+. It’s all these things, and it’s empowering. That really spoke to me as something that was like, “Archie is this classic pillar of culture, and you helped it graduate.” Some of these things that we have that are pillars in culture are really cool, and they speak to something that was going on at the time that they were created, but they haven’t graduated. And you really helped that graduate in a positive way.

Yeah, I think the way that we portray women comes back from my teenage years because I grew up in the pop-punk boom, and the gateway bands for me were blink-182 and Green Day.

As I started to delve more into that, the pop-punk bands that I followed were all singing [and] crying about girls. And that didn’t speak to me whatsoever. So I became a fan of Rancid and NOFX. And then, as I delved into Fat Wreck Chords and Hellcat and Epitaph, it was the female-fronted bands that spoke to me. So, I was a huge Distillers fan and [listened to] F-Minus and the Muffs and L7 and Hole.

The thing I think as well with female-led bands is they don’t let you down. There’s so much you get with male bands, and then you read about them, and you’re like, “Oh, that guy’s the worst.” And I think everyone’s had that experience, even from classic rock to modern music. But with female music, you very rarely read something and go, “Oh, she’s terrible.”

I think you’re creating a place, and it’s also through illustration. I think there are many ways to execute a message. But I think the illustration thing is just [for] all ages. It speaks to me so loud and clear. I can imagine young people engaging with it as well. Do you want to call out some of the things that you’ve worked on and done so people can find out about it or go look for it?

The top things we’ve done is [with] a U.K. band [called] Salem. We did their first EP cover, which was awesome because we got to see [the] vinyl in store because it was through Roadrunner. It’s the singer from Creeper [Will Gould]. And they came to us, and we did this awesome pink record with them. It’s super cool. But it’s really nice because they’re going on to do other stuff, but we’re always going to be the first record.

So, for me as a vinyl collector, it was always like a cool, “Oh, we [did] their first record.” They’re amazing, so when they become a cult band, people are going to be tracking down this EP that we did the artwork for. That was super dope to do that. We did two children’s books with H.R. from Bad Brains, which was incredible and the most bizarre experience ever to work with a living legend. And we did a book with Epitaph Records, which was, again, crazy.

Growing up, were you into comic books and graphic novels, or did you get into the illustrative part of what you’re doing now later on?

I didn’t really fit in with the comic book kind of kids that I went to school with because they were super involved. But I read trade paperbacks. I like things like Batman: The Long Halloween. So I wasn’t reading weekly, but I’d read graphic novels of completed stories and key issues. And then I really like Beavis And Butt-Head and Ren & Stimpy. [My] biggest influence is probably Disney animation. I didn’t realize until I was in university that everything I liked was from the ’60s.

When we started doing this and started trying to be more active in positivity and awareness, something that I really thought about was in the ’80s when Operation Ivy released “Unity.” That was the fight song for that generation of inclusiveness. And then that was followed up in the early 2000s by Leftöver Crack. And they did “Gay Rude Boys Unite,” and the opening line is making fun of that song, and it’s the same tune, and they’re like, “Oh, unity, but you’re anti-gay.” And they were pointing back at punk and saying, “Oh, you’ve forgotten gay people.”

Then we were like, “Well, that’s 20 years ago.” So, it was 1980 Operation Ivy, 2000 Leftöver Crack. And now for this era, we were like, “Well, that needs updating again” because people have forgotten about trans people and disabled people and people that have been left out of punk still. So even though [Leftöver Crack] were including gay people in it, it still wasn’t everyone. It’s time to update that unity idea again, but not as though we’re the beacons of the inclusive punk scene. Just when we were looking at what’s out there, no one is saying, “I’m disabled. I have a hidden disability.” I’ve never seen anyone be like, “Oh, you can be punk and disabled.”

WILLOW is on [our June cover], and it’s super important to us. WILLOW was photographed by Atiba Jefferson and interviewed by Jenessa Williams, and you made WILLOW art. I saw it posted, and that was really cool. Where did the idea to do the WILLOW art come from?

I woke up and saw the photos and was like, “These are awesome, and [so is] the costume that she’s wearing.” I just thought they were such stunning pictures. And then the same morning, I watched the interview she did with her mom about her poly relationship. I just thought, “This is really cool.” It reminded me of when we started doing this, we were talking a lot about a pop group in the U.K. called Little Mix, who are girls from all different backgrounds, races and different sexualities.

We were talking about how much more punk they are than any male. If you look at a male punk band in 2018, they’re still crying about girls and singing the same things. But there are four girls that are singing about, “My ex-boyfriend is a piece of trash,” and they’re singing songs about sex positivity and Black Lives Matter and all these massive things. But because it’s pop music, it’s labeled as “not important,” and we would talk about [how] acts like Halsey [are] the same. She’s totally punk, [and so is] Phoebe Bridgers. And then we were like, “WILLOW is super punk.”

The post HE Creative are illustrating the evolution of the punk scene appeared first on Alternative Press.

Link to the source article – https://www.altpress.com/features/he-creative-issue-395/

Tatiana Hazel got into music early. As a teenager, she began posting original compositions on YouTube, as many other young hopefuls did. Now, as a…

After taking the underground bass scene by storm with the 2020 release of his single “FEAR,” Mindset returns with EP Everyone Sounds Like. In addition…

WILLOW has announced her new album, Lately I Feel Everything, will drop July 16 through MSFTSMusic/Roc Nation/Polydor. The first single off the record, “t r…