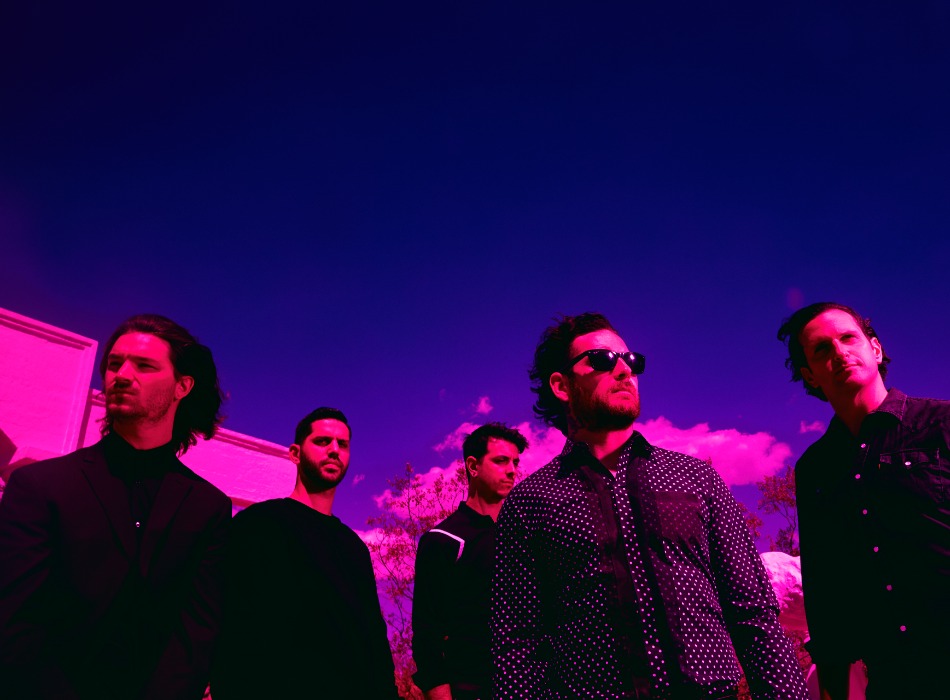 Senses Fail have partnered with Veeps to offer a two-part livestream event. Set in Joshua Tree National Park, the group appear in front of picturesque sunrise and sunset backdrops for the performances.

During the sets, the group revisit two of their classic albums. The Still Searching performance is set to air July 29, and the Let It Enfold You set will take place Aug. 5. Both performances will be followed by afterstream parties via Zoom, and there will also be a limited-edition vinyl release capturing the shows.

Ahead of the performance, bandleader Buddy Nielsen spoke with Alternative Press about the project. The group also offered readers a look at the filming process, with a series of behind-the-scenes photos from Jonathan Weiner.

During the conversation, Nielsen walked us through the ambitious production. He detailed his passion for Joshua Tree, the thought process that ultimately led to the concert and the work that went into assembling the show.

More than that, Nielsen also gave readers a sense of his journey, from the start of the COVID-19 pandemic to the Veeps concerts and beyond. Additionally, he discussed the ways he’s changed as an artist in recent years as well as his growing abilities in the recording studio.

You’ve chosen Joshua Tree as the venue for your performance. Could you talk about what this setting means to you?
The first time I ever went out was for a meditation retreat. Then, I did another meditation retreat there. And then I went camping, and I saw people rock climbing. I got enamored with rock climbing. I just have always been drawn there. There’s something very special about the landscape and about the desert. I’ve had a lot of life-changing events that happened there.

What sort of events?
I found out my wife was pregnant with our first child there. Most recently, I found out Joe Biden won the election while I was driving into the park. Just so many strange little occurrences. One aspect changed my life. I was a first responder to a really bad rock climbing accident. In 2017, I was climbing next to a kid [with] a friend of mine, and this guy fell, about 30 feet upside down. We pulled him out, and he had a compound fracture of his wrist. His wrist was sticking out, and he was unconscious.

There’s no cellphone service in Joshua Tree in the park. I luckily have a SPOT, which is like an SOS device. So I hit that, but I still had to run a mile back to the main road, get in my car, drive about 20 minutes to a ranger station [and] alert the ranger that we need help. He had to be airlifted out of there. He’s still recovering, but he has a traumatic brain injury that will affect him for the rest of his life.

That reframed so much of my life. I stepped into being a father, stepped into realizing that my life is now more important to me and the people around me. I don’t really climb anymore right now, even though it’s something I love to do. It was something that I just didn’t feel comfortable doing anymore, knowing that I have to be there for my wife and my daughter. There’s something special about the area. It’s been such a big part of what this iteration, maybe the last five years of the band, has been. It feels like a good place to merge the old Senses Fail with the current Senses Fail.

The production seemed like a massive undertaking. What was it like putting the show together?
We self-funded all of it. It’s the most amount of money I’ve ever spent on anything we’ve ever done. We definitely took a big risk on it. For me, we either do it and go big and do something really cool, or we just should not do one. A lot of people have done [livestreams], and I wanted to do something that hadn’t been done. We could have done it way cheaper and way more cost-effective. But I didn’t feel like that would be very interesting.

Since you mention the pandemic, I wanted to ask about how that affected you as an artist.
We haven’t been able to play a show since October 2019. People have been asking us the entire time, “Are you going to do a livestream?” I didn’t really want to. I didn’t want to ask our fans to support us through the pandemic. You know, I didn’t want to use the band as my survival mechanism.

Once we started to formulate the idea, I was much more interested in it because I have so much personal history with Joshua Tree. I felt like it would be a really cool way to showcase something that was special. We were able to partner with a lot of different people and turn it into a live record. Our live record turned into a vinyl release. There’s a lot we were able to accomplish outside of just doing the livestream.

I assume this shift also changed the way you approach recording music.
It really made me look at the realities of the music industry and how it’s become very based upon touring income. Most of our income is from touring. I realized that I need to learn how to record. It’s something I’ve been dabbling in, but over the last year of being locked down, I really developed a skill, a place to do it and all the gear. So, I became a producer, [an] engineer and… [a] bad mixer. I’m tracking all my own stuff now. Not anything that we’ve released yet, but in the future, Senses Fail will pretty much all be self-recorded, and then we’ll outsource different aspects of it.

I needed to figure out a way that I could be active, be creative. What did I have? I had a bunch of time. I dabbled with Twitch for like three weeks, and it just wasn’t for me. Obviously, [I] did a podcast, and I just tried to figure out where, if anywhere, I could fit in. To me, creatively, being able to record myself and fully get down an idea from start to finish and mix it and have it finalized, that gives me a lot of freedom to where I don’t have to now take a record advance money or any kind of money.

It is a huge change for me. At one point [in] the band, I was just the singer and lyricist. Now I’m the guitar player, main songwriter and producer. I didn’t really think that was going to happen. That’s not really been something that I was aspiring to be. I realized this was a glaring hole in the business. If I can’t tour, I basically can’t make any money being a musician. That’s what a lot of us figured out. Like, “Wow, we are so reliant on this that I don’t have another model.”

Could you talk about the two albums you chose to revisit for the performance?
They’re our two classic records. They’re the ones that are the biggest and most beloved of our catalog. I think if you were to ask anyone, “What Senses Fail song do you know?,” they would probably know a song off one of those two records. To me, they’re like the pinnacle of that emo sound from that era for our band. They make up a large chunk of my life when I was young in my early 20s and dealing with mental illness and addiction, coming of age and all the other good stuff that happens in your early 20s. Or bad stuff. [Laughs.]

I definitely think they are classics of an important moment in music. Does it feel different to revisit them now that we have some distance from that era?
We never really had any distance from them because it’s the songs we play and have always played in every iteration of the band, every era. I don’t even look at them as old because they’re so current to me. It’s weird. Obviously, I’m not the person I was when I wrote them. I’m not having the same issues or feelings. But these songs feel so relevant. It’s interesting because when you make a record, you think all the songs are good. You don’t know which one is going to be the one that connects.

The thing is, you hope you have one that’s a success, but you never know which one that’ll be. You don’t really have control over what you end up having to play for the rest of your career. “Can’t Be Saved” or a song like that, it’s in every set we’ve ever played since that record came out, and it never won’t be. So it never feels like it’s an old song because I’m always playing it. Some of the other songs feel like, “Man, this didn’t age well.” [Laughs.]

Link to the source article – https://www.altpress.com/features/senses-fail-joshua-tree-livestream-buddy-nielsen-interview/

Rüfüs Du Sol are riding the wave in the United States, where the Australian electronic trio are posting giant box-office numbers. The Sydneysiders’ brace of…

When Toronto hardcore artist DoFlame, also known as Mateo Naranjo has a vision, he “moves everything else to the side” until it manifests.  His new…

For Rüfüs Du Sol, the California desert and Socal’s major hub served as the ultimate getaway during the pandemic, a home-away-from home for creating music…

A new song from Joshua Bassett will be arriving soon. “SURPRISE ! NEW SINGLE ‘FEEL SOMETHING’ MAY 7TH !” the musician and actor revealed on…

MxPx have returned with a new video for their song “Secret Weapon.” The visual dropped in advance of the group’s latest entry into the “Between…