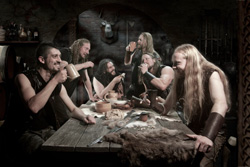 Since the release of their impressive 2005 debut, “De strijdlust is geboren,” Heidevolk have taken the heavy music scene by storm, conquering stages throughout the world with their very own brand of pagan folk metal. Following their latest offering, the much-acclaimed, “Vuur Van Verzet” (2015), February 24, 2023 will see the Dutch band release their seventh studio masterpiece, “Wederkeer, through Napalm Records.

The band comments:
“Today we proudly present our third music video from ‘Wederkeer!’

“The title track ‘Wederkeer’ is a powerful acoustic anthem about inner strength, pride and beliefs. In the video we witness a young woman wandering through the cold dark forest. She is lost yet something inside her fuels her quest and tells her to persist. Suddenly a luring hymn draws her to the scene of glimmering flares of a fire through the trees, and shadows of men singing a pure and uncompromising anthem. When she eventually enters the circle of light, the scene she thought she witnessed has disappeared, as if it was never there…

“With the release of our new album drawing near this raw acoustic track gives you yet another glimpse of what is coming your way. Join us, for the Pagan Metal Brotherhood is on the rise!”

Link to the source article – http://www.metalunderground.com/news/details.cfm?newsid=155009

posted Jan 13, 2023 at 8:05 AM by Diamond Oz.  (0 Comments) Having recently wrapped up a hugely successful European tour, today Beyond The Black…