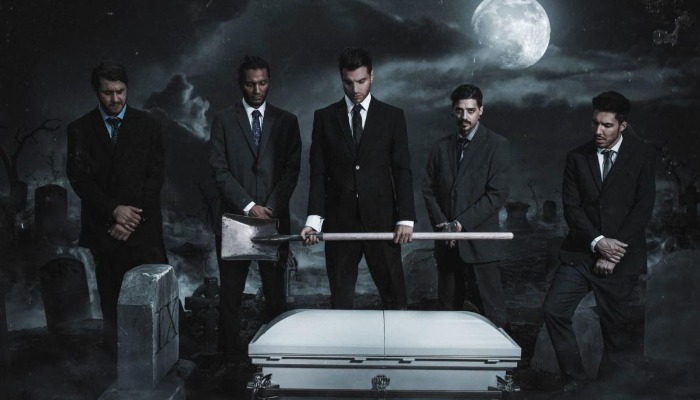 Ice Nine Kills have released their latest video, “Funeral Derangements.” The new single comes ahead of their upcoming album, The Silver Scream 2: Welcome To Horrorwood.

The band have released a number of cinematic visuals in the lead-up to the new record. From the American Psycho-inspired Jacoby Shaddix collab “Hip To Be Scared” to their Child’s Play tribute video for “Assault & Batteries,” Ice Nine Kills have made a deep dive into the classics of horror for inspiration.

The new video is no exception, paying homage to the classic film Pet Sematary, adapted from Stephen King’s novel of the same name.

Guest appearances from musicians and actors are also a common thread on the upcoming album. The visual for “Funeral Derangements” features legendary horror actor Bill Moseley (The Devil’s Rejects, House Of 1000 Corpses) and Miko Hughes, who appeared in the original 1989 film. Josh Katz of Badflower, as well as James A. Janisse and Chelsea Rebecca of the Dead Meat “Kill Count” YouTube series, also make cameo appearances.

“In perhaps the most ironic cameo in recent horror memory, we’ve tapped the amazing Miko Hughes⁠—Gage from the original Pet Sematary⁠—to play the role of the reckless truck driver,” Charnas explains. “An 18 wheeler, a twisted cat, a scalpel and an evil burial ground all come together in what I’d call our most ambitious homage yet. Dig in.”

Read more: The story behind POORSTACY’s horror-influenced ‘Party At The Cemetery’

Charnas references irony, hinting at a subtle Easter egg built into the new film. In the 1989 film, Hughes’ character appears in a particularly memorable scene with a truck driver. In the new video, Hughes returns as the truck driver, effectively coming full circle with his original appearance via a role reversal.

With each release, Ice Nine Kills continue to push to another level. They do so at every level, whether through nuanced details and carefully placed references or blockbuster-style music videos and groundbreaking songs.

Ahead of the release, Alternative Press spoke with Charnas about Ice Nine Kills’ goals and vision. He emphasized their mission to innovate, rather than chasing other artists. Charnas made it clear that the band’s “mantra” was “to not follow the trends.”

“I think that that’s a mistake a lot of bands make and it’s a mistake that we used to make back in our earlier years,” Charnas says. “We were too concerned about what other bands were doing, the popular kids [in] the cafeteria, where they were sitting. As soon as we stopped giving a shit about that, that’s when we started to become more popular. If there’s anything to learn from us, it’s don’t follow the trends. You might have success in the short term. But you don’t want to be one of those flavor-of-the-week bands that just sound like everybody else.”

Ice Nine Kills’ “Funeral Derangements” is available to watch here or below.

Link to the source article – https://www.altpress.com/news/ice-nine-kills-funeral-derangements-video/

Slashercore outfit ICE NINE KILLS has dropped the fourth and final new track from its upcoming album “The Silver Scream 2: Welcome To Horrorwood” prior…

This band. Ice Nine Kills have released another track from their upcoming album ‘The Silver Scream 2: Welcome To Horrorwood’, and this time they are…

Sitting in a car to obscure the noise from a shoot for an upcoming music video while donning shades, a white shirt, and a pair…