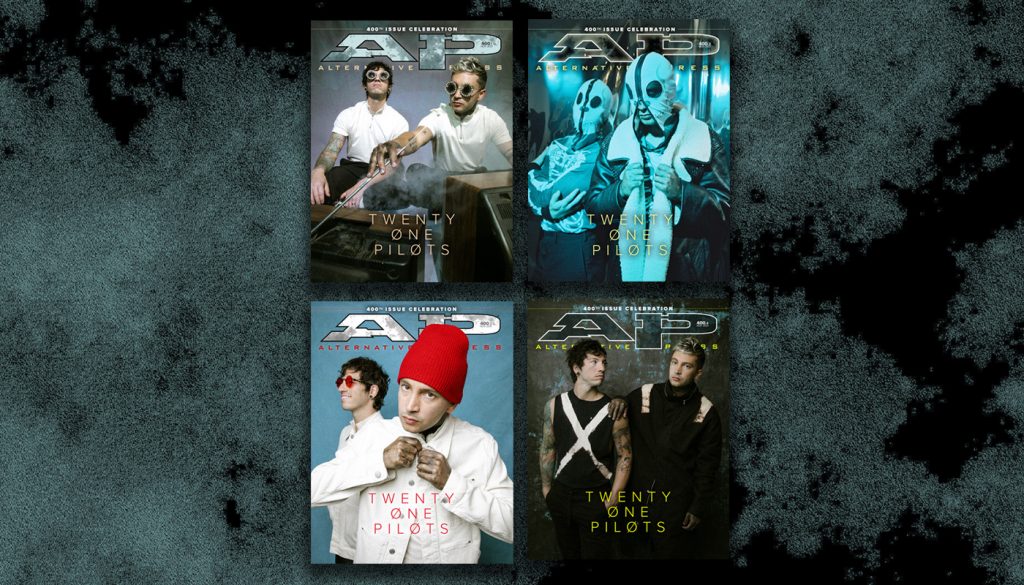 With Alternative Press issue 400, we celebrate a major milestone for the magazine. AP has continued to change with the times, staying in touch with the evolution of music and culture at large. However, we’ve never forgotten our commitment to championing “New Music Now.” In many ways, this issue looks back to our roots. As always, we insist on pushing forward into the future.

This month, beloved AP cover stars twenty one pilots make their return. They are joined by Knocked Loose, IDLES, SeeYouSpaceCowboy and many other artists. As always, we continue to highlight the broader culture that makes up the alternative world. The magazine highlights a number of multi-talented musicians such as skating legend/Urethane guitarist Steve Caballero, Avenged Sevenfold vocalist/NFT advocate M. Shadows and H2O leader/podcaster Toby Morse.

Read more: LILHUDDY and Joel Madden on new-era pop punk and owning who you are

In TØP’s latest cover appearance, the duo of Tyler Joseph and Josh Dun spoke to Maria Sherman about everything from their early years to the present. Shot by the inimitable Ashley Osborn, the cover has four variants, all of which capture the personality and energy of the band.

One of the key points of conversation was TØP’s most recent album, Scaled And Icy, released in May. The project came out of the forced isolation of the COVID-19 pandemic. One might expect the record to reflect the very reasonable uncertainty that many artists felt at the time.

Resisting the temptation to lean into negativity, they constructed a vibrant and uplifting album. The project flies in the face of a pervasive sense of despair that can at times feel insurmountable. It shows that there is light at the end of the tunnel, both for the band and for those of us who yearn for contact with the outside world.

During the interview, the band also revealed the hard work that has defined their career since the beginning, infusing every song they write. They also returned to their deep love of Ohio, a favorite topic for the Columbus, Ohio natives and our own Cleveland-born magazine. (“I was born and raised in Ohio. I liked it my whole life,” Dun reveals.)

Most of all, the discussion revealed the emotional depth that fuels the band on each and every project.

“When you’re creating something, you want to make sure that you’re tethered to reality still,” Joseph explains. “Even if you’re venturing deep into this abyss, tie rope around your waist. [You] keep it tied back to where you came from. These characters and the things talked about; I can’t not be talking about something that I’m personally going through. This person sitting right here, wearing this jacket, this person—” he taps his chest “—is also going through whatever is being written about. In some ways, there is escapism, but I like to believe that all those themes are tied back to reality.”

“It’s really important for Tyler and I to create and release music that we would listen to and that we do listen to and that we would be a fan of,” Dun adds. “That’s something that I don’t know if a lot of bands do. ‘Is this something that I personally would put on in my car? Would I enjoy this? Would I show my friends?’ All the songs eventually pass that test for both of us.”

Also in this issue:

Plus, get to know your new favorite artists Kid Bookie, Static Dress, Holly Humberstone and more.

The post In issue 400, twenty one pilots reveal the importance of their community appeared first on Alternative Press.

Link to the source article – https://www.altpress.com/features/twenty-one-pilots-cover-issue-400/

A special performance, there for you to listen to whenever you want. Back in May, Twenty One Pilots introduced their new album ‘Scaled And Icy’ to…

twenty one pilots appeared on the cover of Alternative Press issue #400. During the conversation, the band discussed their Ohio roots and why they have…

twenty one pilots are celebrating nearly six months of Scaled And Icy by releasing the livestream version of the album’s tracks. The duo of Tyler…

Another track, another top spot. Twenty One Pilots have another song up at the top on Alternative Radio.  This time, it’s ‘The Outside’, which according…

Twenty One Pilots singer Tyler Joseph has claimed that he was asked to write a song for the Top Gun: Maverick soundtrack before star and…