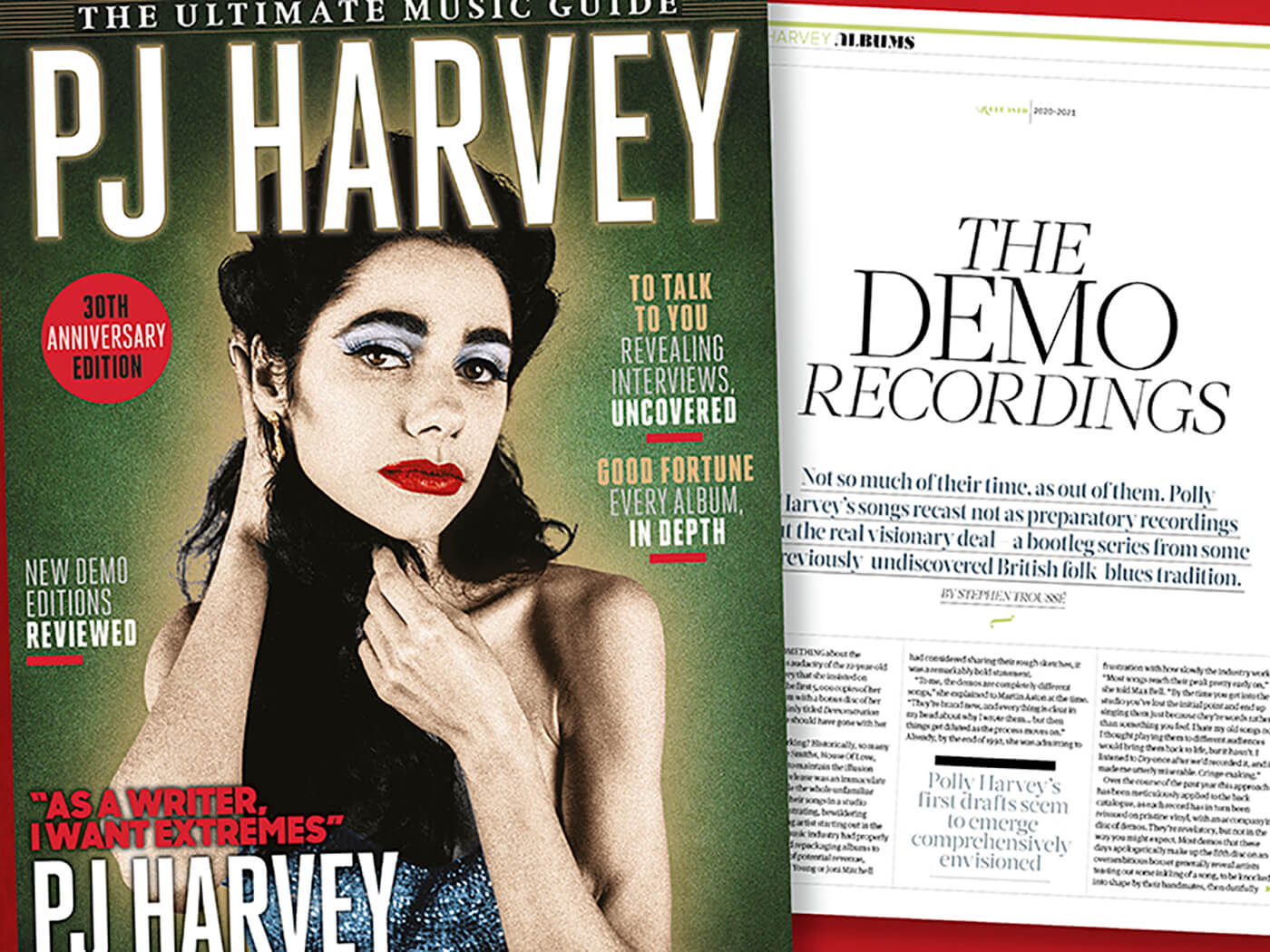 Demo in the 1990s wasn’t an especially aspirational word. When PJ Harvey released her debut album Dry with an accompanying record called Demonstration, however, she elevated the whole enterprise from implying an occasionally half-baked means of securing a gig into a much bolder statement.

In Harvey’s view her actual “finished” album came to seem something of a compromise, defanged and domesticated by familiarity. These initial versions, she seemed to be saying, were how the songs were meant to be heard.

As you’ll read in Stephen Troussé’s in-depth review of the new PJ Harvey vinyl releases of the demos she made to prepare each of her albums, the demos reveal an intrinsic part of Polly Harvey’s creative work, a process from which she has never wavered in the unbelievable 30 years of recording since the release of her debut single, Dress in 1991.

The vision for the record is in place from the start – there might be small issues with fidelity and arrangement to resolve, but the core sound and vision for the record is already utterly intact. That might on the one hand entail the raw proposals for Dry (these, tellingly, were slated to be called Dryer), or the (even more) haunting demos for White Chalk. Or in a more lateral sense, it might mean the live, public-facing Somerset House Sessions for what became Hope Six Demolition Project.

Last year, guitarist Joe Gore told Uncut’s Peter Watts about his work on the breakthrough album To Bring You My Love in 1995. Gore had come from the USA bringing with him strong chops, a top-end fuzzbox, and a determination to use both. It wasn’t to be. As Gore recalled: “She said to me, can you just play it a bit more like I played it?”

This singularity of vision is what you’ll discover more about in this deluxe, anniversary Ultimate Music Guide. Along the way you’ll read in-depth reviews of every album, and archive features which reveal how PJ Harvey’s original quest for extremity (something that links the brutality and noise of Rid Of Me, with the ghostlike delicacy of White Chalk getting on for 15 years later), has since fine-tuned itself into polemical folk rock and a hope for making impactful work. “I want to give something back of worth,” she told Uncut in 2013. “I want to make something worthwhile and meaningful.”

So far so good, then. What happens next will be worth waiting for.

Buy a copy of the magazine here. Missed one in the series? Bundles are available at the same location…

Meet ze monsta! Presenting the definitive, deluxe 148-page guide to PJ Harvey, from Dry and Dorset to Afghanistan and the Hope Six Demolition Project. All the…

Waging heavy peace! Introducing the definitive, fully updated 148-page guide to Neil Young. From Buffalo Springfield to Colorado: every album, by every band, reviewed. The…

PJ Harvey’s ‘The Peel Sessions 1991-2004’ is getting a vinyl reissue. READ MORE: PJ Harvey — The evolution of an icon The record, which was originally…

Buy the Ultimate Music Guide to Creedence Clearwater Revival now! When I first picked up a copy of Willy & The Poor Boys in the…