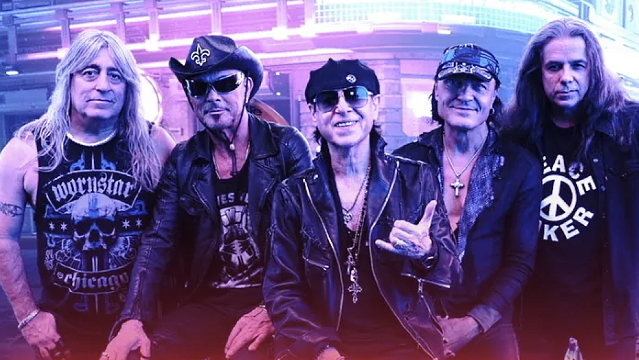 In a new interview with Andy Hall of the Des Moines, Iowa radio station Lazer 103.3, SKID ROW guitarist Dave “Snake” Sabo, whose band is currently supporting the SCORPIONS on the rescheduled dates of their “Sin City Nights” residency, weighed in on the legendary Germany hard rockers’ exclusion from the Rock And Roll Hall Of Fame. He said (as transcribed by BLABBERMOUTH.NET): “It’s criminal. It’s absolutely criminal. They have blazed the path for so many bands. And so many people probably don’t even realize it, but they have been such a huge influence on so much music that is contemporary today. Their songwriting, their hooks — they’re just undeniable. Their musicianship — always undeniable. And yes, it’s criminal that they’re not in the Hall Of Fame; it’s absolutely ridiculous. They should be heralded, not only for their body of work but just how amazing of a band they’ve continued to be for decades.”

Elaborating on what makes SCORPIONS so special, Sabo said: “They’re masters at their craft; they always have been. They’re one of the best live bands I’ve ever seen. Their abilities are unbelievably, I think, underrated. If you watch them play, they’re an absolute machine. It’s incredible. I’ve never seen them where they haven’t been great — never. From playing the Moscow Music Peace Festival in 1989 to playing in Vegas with them now in 2022, they’re always great because they’re dedicated to their craft. They’re great musicians, great singers, great performers. So every night that we go out there, we know that we have to be on top of our game if we’re going to be in the same arena as them.”

SCORPIONS have been eligible for the Rock Hall since 1997 but have yet to be nominated in spite of the fact they are the most successful rock act to call Germany home, in addition to having several FM radio anthems to its credit, notably “Rock You Like A Hurricane”, “No One Like You” and “Big City Nights”.

Two years ago, SCORPIONS guitarist Matthias Jabs told Lazer 103.3 about the possibility of his band one day getting inducted into the Rock Hall: “We’ve been wondering; then we stopped wondering. You never say never. Maybe next year. Maybe at some point in the future. We haven’t given up, but it is a bit surprising that we haven’t been really mentioned yet. But lately, there’s a couple of rock bands that have at least been presented and were mentioned, like MOTÖRHEAD, for example; JUDAS PRIEST for the second time. I didn’t follow it that much in recent years, because they always ignored us. I have the feeling now that maybe in the near future it might happen. I personally have the feeling it is actually well deserved, but if it doesn’t happen, it doesn’t happen. But let’s see.”

Four years ago, SCORPIONS singer Klaus Meine said that the band “would feel very honored” to one day get inducted into the Rock Hall. “To be inducted into the Rock And Roll Hall Of Fame definitely would be something,” he said. “And I think our fans around the world would be proud of that as well. It’s something very special after all. And I know my friend Jon Bon Jovi was… BON JOVI, they were inducted recently, so I think there might be a change in politics, like when they start putting in now heavy metal or classic rock bands; they haven’t done this for, I think, forever. And there are many bands who would be proud to be inducted. And for us, being a European band, being a German band, it would mean the world.”

SCORPIONS previously played a Las Vegas mini-residency in May 2016, consisting of five shows at The Joint at the Hard Rock Hotel & Casino. Support on those dates came from QUEENSRŸCHE.

Link to the source article – https://www.blabbermouth.net/news/its-absolutely-criminal-that-scorpions-havent-been-inducted-into-rock-and-roll-hall-of-fame-says-skid-row-guitarist/

Stephen Pearcy says that he doubts RATT will ever be inducted into the Rock And Roll Hall Of Fame. Despite the fact that artists are…

Judas Priest are set to be inducted into the Rock and Roll Hall of Fame, receiving the Musical Excellence Award. The band is one of two recipients…

SLAYER guitarist Kerry King says that JUDAS PRIEST deserves to be inducted into the Rock And Roll Hall Of Fame. Even though artists are eligible…