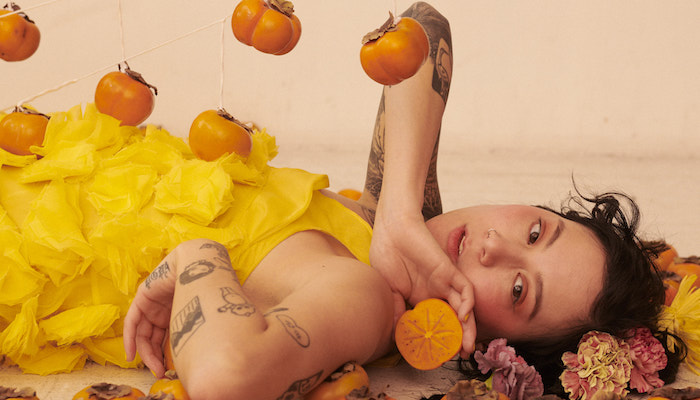 The memoir, titled Crying in H Mart in reference to the popular Korean-American supermarket, originally started as a New Yorker essay. Now, it will be made into a feature-length film.

Released for the first time as a book earlier this year, Crying in H Mart centers around Zauner’s life and experience growing up as one of the few Asian American kids in her school in Oregon. It also focuses on her career in the East Coast indie music scene and meeting her husband. But the core of the book emphasizes Zauner’s relationship with her mother, who had terminal cancer. This diagnosis forced Zauner to question and rediscover her identity.

“Being half-Korean has always been such an inherent part of my identity that it was the first time that I really questioned if I could lay claim to that anymore,” she told CBS This Morning during their June 5 Saturday Session segment.

Zauner has joined forces with producers Stacey Sher and Jason Kim to bring her story to life. Additionally, the singer will be providing the soundtrack for the adaptation.

“It is a surreal thrill to have the opportunity to memorialize my mother in film, and I consider it of the highest honor to pursue that task alongside creative luminaries such as Stacey Sher, Jason Kim and Orion Pictures,” she says in a press release.

During the CBS interview, Zauner opened up further about how her mother inspired her music and writing. She also discussed her artistic influences and why she wanted to make indie-rock music in the first place.

After falling in love with the genre, her first musical obsession came in the form of Karen O of the Yeah Yeah Yeahs.

“[She] looked kinda like me, was half Korean and half white, and was every single thing that obliterated this docile Asian woman stereotype,” she says. “I remember just thinking, ‘How do I do that?’”

While Japanese Breakfast is a passion project, the group also includes drummer and backup vocalist Craig Hendrix and bassist Deven Craige. Also in the band is Zauner’s husband Peter Bradley, who plays the guitar and keyboards.

The first two Japanese Breakfast albums, Psychopomp and Soft Sounds From Another Planet, gave Zauner the creative freedom to explore her emotions and process the death of her mother. The cover of Psychopomp even features a photo of her mother. Now, with the release of their third studio album Jubilee, Zauner was able to craft big, orchestral songs about finding happiness.

Jubilee is out now via Dead Oceans. Japanese Breakfast also recently announced tour dates for this summer and fall. You can catch them at the dates below with support from Mannequin Pussy and Luna Li.

Read more: 10 artists who brilliantly directed their own music videos

Read more: Mallavora are using their platform to create an inclusive space in music

Link to the source article – https://www.altpress.com/news/japanese-breakfast-movie-crying-in-h-mart/

Last week, Michelle Zauner released her third album as Japanese Breakfast, which came a few months after the release of her stunning memoir, Crying in H Mart.…

Crying in H Mart, the memoir by musician and writer Michelle Zauner (aka Japanese Breakfast) is set to be adapted into a feature film. READ…

Japanese Breakfast stopped by CBS This Morning this weekend to perform three songs from her new album ‘Jubilee’ – you can watch below. READ MORE: Japanese…

A new trailer for the forthcoming indie game Sable has been released, featuring the first sliver of Japanese Breakfast’s original soundtrack for it. Titled ‘Better…

In honor of Asian American and Pacific Islander (AAPI) Heritage Month, Billboard is highlighting Asian-American voices within the music industry through a series of conversations…