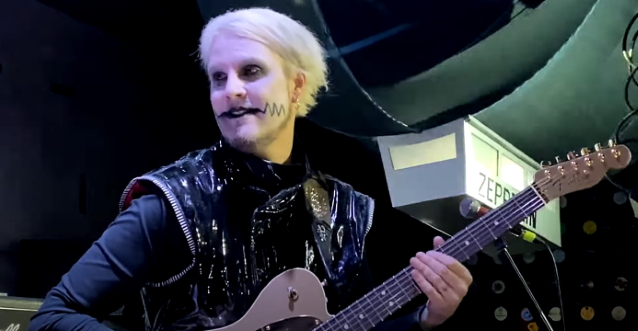 JOHN 5 AND THE CREATURES, the band led by former MARILYN MANSON and current ROB ZOMBIE guitarist John 5, has postponed the next three shows on its “Sinner” North American tour after a positive COVID-19 test within the touring party. JOHN 5 AND THE CREATURES expect to resume the trek on April 28 in Austin, Texas.

Earlier today (Saturday, April 23), John 5‘s social media was updated with the following statement: “After a positive test for Covid, JOHN 5 & THE CREATURES are postponing the next three shows of the current Sinner Tour – These dates include 23rd – Las Vegas, 24th San Diego and the 26th April Albuquerque.

“We have been following Covid protocols but still had a positive test, The appropriate response is to postpone and we’ll announce rescheduled dates as soon as possible.

“The safety or our fans and venue staff is of the utmost importance to us and we look forward to seeing you all in the near future.

JOHN 5 AND THE CREATURES will be recording shows along the “Sinner” tour for a live album and video, with San Francisco and New York dates confirmed for the recordings.

John 5 has worked with a varied range of artists, performing as guitarist for some of the biggest headlining rock bands in the world such as ROB ZOMBIE and MARILYN MANSON, as well as playing session with Paul Stanley, Rod Stewart, LYNYRD SKYNYRD and more. Slash has called John 5, “one of the most mind-blowing guitarists around” and Rob Zombie has dubbed him “a fucking shredder”. John 5 has released seven solo albums to date, as well as a remix album, and has written music for the likes of MÖTLEY CRÜE, Steve Perry, Ricky Martin and others.

In 2015, following a series of web shows to celebrate the release of his solo album “Careful With That Axe”, John 5 decided to take his solo set on tour and formed THE CREATURES band to support his live shows. Initially joined by long-term friend Rodger Carter on drums, the band continues touring to this day, and now work as a unit on 5‘s solo albums, including “Season Of The Witch”, the live album “It’s Alive”, “Invasion” and 2021’s “Sinner”.

After a positive test for covid, John 5 & the creatures are postponing the next three shows of the current Sinner Tour -… 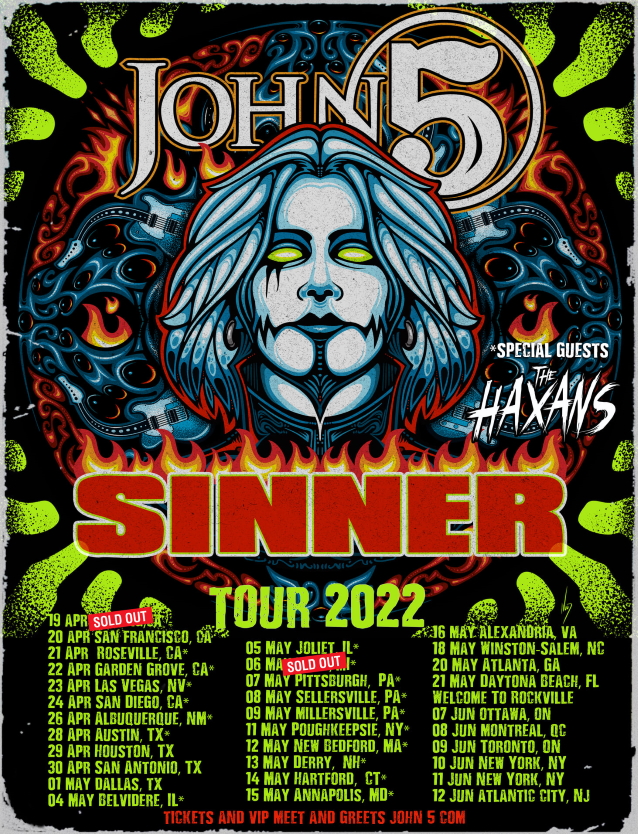 Link to the source article – https://www.blabbermouth.net/news/john-5-and-the-creatures-postpone-three-shows-after-positive-covid-19-test/

Fan-filmed video of John 5‘s entire February 27 performance at HDX Circus Bar in Mexico City, Mexico can be seen below. JOHN 5 AND THE…

April 15, 2022 Former MARILYN MANSON and current ROB ZOMBIE guitarist John 5 spoke to the “Brutally Delicious” podcast about his involvement in the upcoming…

Incendiary guitarist and solo artist John 5, who was recently voted as #7 on Ultimate Guitar‘s “Best Metal Guitarists In The World” list, has announced…

John 5 has explained his decision to pull out of his previously announced U.S. tour as the support act for legendary Swedish guitarist Yngwie Malmsteen.…