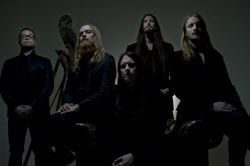 Swedish melodic death metal legends Katatonia are set to release their latest album, “Sky Void Of Stars” tomorrow and will shortly be heading out on tour to promote the record. Unfortunately, guitarist and co-founder Anders Nyström will miss out on the European tour. A statement from the musician reads as follows:

“Tomorrow, Friday the 20th, we launch Katatonia’s brand new 12th album and we can’t wait to hear all your thoughts.

“The band’s eager to get out on the road and start the tour, but unfortunately I won’t be able to join them on this leg due to personal family reasons. However, good news is that we have a highly competent replacement in Mr Nico Elgstrand (Entombed A.D.) who already filled in for me on an earlier occasion and did an amazing job. So rest easy, the tour will not be affected in any way and everything the band has planned surely is something you don’t want to miss!

“Until I’ll be back on stage later this spring, I wish the guys and all our fans a great time on the road, under a sky void of stars…”

Link to the source article – http://www.metalunderground.com/news/details.cfm?newsid=155028

June 23, 2022 Napalm Records has announced the signing of legendary Swedish masters of melancholy KATATONIA to a worldwide deal. Piercing through the core in…